How TEPCO plans to build an ice wall at Fukushima

TEPCO has released a new video outlining its plans for construction of an ice wall to enable trench clean-up at Fukushima Daiichi. 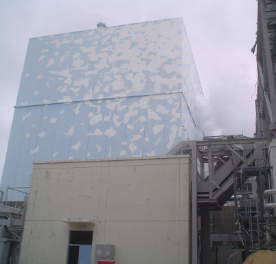 TEPCO has announced that it will start operations in March that will enable workers to eventually remove highly-contaminated water in trenches seaside of Fukushima Daiichi unit 2.

Underground trenches for piping and power cables were flooded after the 11 March 2011 tsunami; this water is highly contaminated. A leak in April 2011 between units 2 and 3 from the trench into the Fukushima Daiichi port was stopped with concrete, but may still be leaking into groundwater within the site. Measures have been taken to seal off the trenches from the sea, but given the level of contamination, even a small leak significantly raises the seawater’s radioactive inventory.

TEPCO estimates that there is 5000t of contaminated water in unit 2 trenches, and 6000t in unit 3. But the water cannot simply be pumped out — even if it weren’t very hazardous because of the high levels of contamination — because of linkages with the flooded turbine building basements.

How will the freeze technology work?

In a new video, Masayuki Ono, manager, nuclear power and plant siting division, TEPCO, explains how it will use water-freezing technology to isolate the trenches from the turbine buildings.

In November 2013, TEPCO began removing caesium from the trench water by pumping it up a vertical shaft, through a mobile decontamination unit, and back in by the turbine building. Caesium accounts for half of the trench contamination material, and is a strong gamma emitter. The decontamination unit has a treatment capacity of 500t/day, and after only a week reduced caesium-137 levels from 170 million Bq/L to 56.7 Bq/L, and treatment operations have continued.

To stop the leaking of contaminated groundwater, TEPCO has been looking at installing underground fences of frozen soil: tubes drilled into the ground are filled with circulating refrigerant, gradually freezing water around them and creating a solid, impermeable wall.

Engineers are now planning to adapt this idea to seal off trench from the turbine building with a method that has never been used before.

To test the idea, a 2m-wide by 2m-deep mockup trench (half normal size) was built. A row of freezer pipes runs across the middle of the mock trench, which is full of water. Then coolant is circulated through the pipes, and an impermeable wall was shown to form. The ice wall was even formed in a second case, where obstacles such as cable trays and pipes blocked the full insertion of packers (more pipes were inserted).

Ice walls tend to repair themselves; even if they crack, water seeping through will tend to freeze.

Freezing operations are expected to start around March 2015 at unit 2; forming the wall is expected to take two months, after which trench water will be removed. Work to drain the trench at unit 3 will not begin until unit 2 has been completed successfully.