The past few years has seen major technical developments in the design of cable cranes, writes Michael Maack 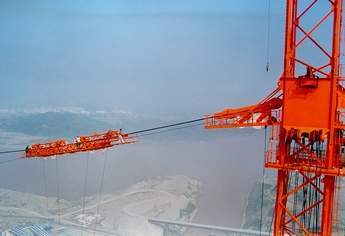 Shuikou, Wuqiangxi, Gehe Yan, Ertan, Three Gorges, Xiaowan and Jinping. What exactly do all these names have in common? The answer is that they are all dam projects in China that have been constructed using cable cranes supplied by thyssenkrupp-fordertechnik (formerly PWH). Due to their essential and characteristic structural feature – the track rope – cable cranes are often most suited for dam construction projects like the ones mentioned above, which are narrow, long and, in most cases, very high structures.

As the carrying rope is fixed and can span wide distances, from a transport-logistics point of view, the cable crane is ideal for use on long, stretched-out job sites without the need for obtrusive supports. The items being transported are almost always the same: concrete, reinforcements, formwork-related parts, construction equipment and pre-fabricated items for the dam.

In general, the following technical performance data should be used for evaluating the use of cable cranes:

The following paragraphs describe how the main functional components of cable cranes have been continuously developed over the course of the past few years.

It goes without saying that the flat screen has now made its appearance in the operator’s cabin. However, that is easier said than done, as a dam construction site cannot just be ‘packed up’ to fit into a 21” format. Originally, the crab-and-hook positions were represented on separate electromechanic display panels, both consisting of a general representation of the dam length and height, coupled with a fine-adjustment indication to ensure pinpoint accuracy for the approach to the destination.

To be more explicit: the destination to be reached must be approached accurately to the metre over a distance in excess of 1000m and heights of several hundred metres. To achieve this, fine-tuning displays are essential.

The intermediate step in the technical development was the digital display; however, this took from the operator any ‘feeling’ for the travelling of the crane. Today, development has reached the point where the appropriate representation is found in graphic charts. When the crab starts to traverse, the whole of the dam, together with its blocks and any possible obstacles, is represented on the screen. As soon as the crane gets near to its destination, the programme automatically selects the corresponding image detail. This enables the operator to approach the target point, using the magnifier enlargement function which gives an exact representation of the destination environment.

Despite an accurate destination and load point representation, the crane operator generally has no information about the current load-oscillating condition, especially from a long distance away or with poor visibility, as may be the case if operating during the night, in fog or in rain. Therefore, the crane operator needs a high degree of intuition in order to release the load gently at a long distance from the cabin.

Since the mid 1990s, destination guidance controls combined with anti-oscillating routines have been increasingly used. These controls allow pinpoint accuracy and almost oscillation-free destination guidance. Considering that similar control units have long been in use in port cranes, using this technique may not be so difficult. However, it must be stated that, in these cases, the hoisting heights range from 10 to 35m, not 350m, just as the oscillating point is not a fixed roller located on a boom tip, but a crab moving on a yielding and swinging track rope.

As the crab traverses, both it and the crab traversing rope, which can very often be over 2000m long, become yet another swaying structure which must be dealt with, as well as the load oscillation. In close cooperation with suppliers of electrical equipment, ThyssenKrupp has been successful in defining the system properties accurately enough that a reliable plant can operate at the client’s disposal, largely independent both of the operator and the weather. Using additional detectors, the load level can be stabilised to compensate for the quickly-changing slackening of the track rope which occurs when the concrete bucket is emptied, thus keeping the load at a constant level.

Substantial improvements in the electronics field have made the operation and handling of the crane easier, but progress has also been made on the mechanical side. The latest goal was to make the rope guidance unit, which winds up the 1400m long hoisting ropes at a speed of up to 14m/sec, more reliable and to reduce the maintenance requirement further. Previously, the hoisting rope was usually guided by means of a PAN-alloy bronze nut which often got too hot and therefore wore out relatively quickly. Nowadays, this technique is a thing of the past, as this nut has now been replaced by low-friction circulating-ball spindles with pre-tensioned nuts. This combination ensures a wear-resistant operation at high speeds and with high loads.

However, the demand for a robust guidance system still existed, bearing in mind the hard and dusty operational conditions which prevail on dam sites. Nowadays, such a guidance unit is available in the form of a ThyssenKrupp gearbox combined with a roller chain, which has been designed to adequately and safely fulfil the requirements for an easy installation, high reliability and stress resistance, as well as easy maintenance.

Until recently, both the winch and the drive sheave have been driven by an open intermediate gear. Over the years, manufacturers, erection and operating teams have gained plenty of experience with this kind of drive, which has the additional advantage of being cost-effective. However, for the conditions which exist today, the manufacturing and mounting chain is too long and therefore not reliable enough.

Also, environmental and noise protection regulations have increasingly called into question the use of open intermediate gears with their related disadvantages such as vibrations, noise pollution and lubricant supply. In these circumstances, the obvious thing to do was to employ a direct drive, using special couplings, for the hoisting rope winch and drive sheave. This solution ensures a reliable installation and a low-maintenance, very safe operation says the company. The very high requirements call for driving powers of up to 1000kW and drum diameters of 3m mean that such cranes are impossible to compare with conventional cranes.

Finding a satisfactory static solution for the travel gear of the machine car has been rather more problematic. In the past, the statically undetermined bedding of the travel gear had not been a problem, as this could be remedied with the dimensioning. Nevertheless, this was an unsatisfactory situation for which design engineers have continued to seek a solution. Thus, the new design concept provides for a flexible bedding which is able to reduce considerably the constraining forces which previously acted between the horizontal and vertical running wheels.

In order to ensure that the entire rope system is safely locked, the track rope is still made of round wires in the core and several layers of Z-shaped wire. Over the last few years, the project work has required delivery of partially ready-made traversing ropes, i.e. ex-works ropes which are already equipped with a cast-on socket. This has not only helped to reduce the work of the site staff, but has also resulted in a shorter erection period. Now, the casting of the second socket for the track rope is increasingly carried out using epoxy resin which is much easier to handle than the dye-cast zinc alloy socket which was previously used.

ThyssenKrupp traditionally pay special attention to the safety aspects of cranes, due particularly to the fact that the ThyssenKrupp group also operates steel works and handling plants and is therefore able to draw on the vast experience it has gained in these areas. This has meant that particularly sensitive components such as hoisting gear, slewing gear and climbing travel gear were equipped with redundant brake systems. In the past, only the crab traversing which, as it is without a power supply so is therefore difficult to monitor, represented something of a challenge. Equipping the crab traversing with an increasing number of limit switches helps to prevent collisions occurring at the fixed points. The passage carrier/crab is now also fitted with an electronic monitoring unit.

Apart from these safety-related characteristics which ThyssenKrupp has integrated into its equipment, it is taking an active part in the work of the technical standard organisation, Oitaf, whose high standard level is marked by the manufacturers of passenger ropeways. With relation to these activities, ThyssenKrupp recently obtained immediate CE certification, as well as other official acceptances such as those awarded by the employer’s liability insurance association and by the TÜV (technical surveying association), in connection with the completion of a contract in Germany.