Through the intervention of India's Supreme Court at a crucial juncture, one more dam-based hydroelectric project in India - the 520MW Omkareshwar scheme - gets ready for commissioning 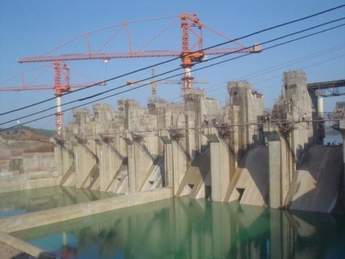 The powerful NBA (Save Narmada Movement), an NGO pleading the cause of dam-oustees in India, has long been against the execution of the 520MW Omkareshwar hydroelectric project on the Narmada river in India’s central state of Madhya Pradesh. Despite its objections however, India’s Supreme court ruled in favour of the hydro scheme in June this year, when it gave the go ahead for the project’s developer, Narmada Hydroelectric Development Corporation (NHDC), to raise its reservoir-level to a height of 189m through the closure of its dam-gates, thereby taking advantage of an increased water-flow during India’s monsoon season. This raised level would, in turn, enable the various generating units of Omkareshwar to undergo synchronisation with the grid, get tested and run on a trial basis, as the project gets ready for commissioning by this year-end.

Omkareshwar is one of the 30 major dam-based projects on the river Narmada proposed in 1979 by the federally-appointed Narmada Water Disputes Tribunal. Of the 30 dams, 29 were to be constructed in Madhya Pradesh state (the only other being Sardar Sarovar in Gujarat).

Narmada is by far the biggest of the west-flowing rivers in India, which discharge their waters in the Arabian Sea. For the better part of its 1312km length it flows through Madhya Pradesh, in the process touching Maharashtra on its south bank before entering Gujarat and reaching the sea. Despite the recommendation of the Narmada Tribunal, however, the State Government of Madhya Pradesh was not able to initiate action on most of the proposed large hydro projects on the river, mainly due to a lack of resources. These included the 1000MW Indira Sagar scheme, as well as Omkareshwar.

It took a proposal in 2000 from the federal hydroelectric utility, National Hydroelectric Power Corporation (NHPC), to get things moving. In August that year, NHPC signed an agreement with the Madhya Pradesh government to create a new joint-venture company – NHDC – which would undertake the planned exploitation of the Narmada’s hydro potential in the State. The new company was to have an authorized share-capital of Rs.30B (approx US$730M), to be contributed by the two partners, and with its corporate office in the state capital, Bhopal.

To begin with NHDC was mandated to execute the Indira Sagar and Omkareshwar projects. Indira Sagar, with a reservoir of 12.22Bm3 storage, was to be the ‘mother project’ for the downstream schemes (including Omkareshwar) along the Narmada basin. It was fully commissioned by NHDC in March 2005.

Omkareshwar, like Indira Sagar, was to be a multi-purpose project (see Table 1). For power generation, it was to have an installed capacity of 520MW (8 x 65MW), with a designed annual output of 1166MkWh in its initial stage. It was also designed with an irrigation potential of 0.28M ha on a culturable command area of 0.15Mha. Power generation at Omkareshwar was to be directly related to the regulated release of water from the Indira Sagar dam upstream.

In July 2003, NHDC signed a Rs.14.76B (currently US$360M) turnkey contract for construction of the scheme with a consortium comprising India’s hydro-engineering and construction major, Jaiprakash Industries, and voith-siemens Hydro. As part of the deal Jaiprakash was to undertake civil works (design through lahmeyer International, Germany) and hydromechanical works (sub-contracted to alstom, Portugal). Electrical and mechanical works were assigned to Voith Siemens Hydro. The contract was to be executed within four years of the starting date of mid October 2003.

The Omkareshwar project would lead to the displacement of 30 villages falling in the project-area. In three of those, according to NHDC, only Government owned land would be affected. In the other villages, initial estimates suggested 4319 project affected families (PAFs) needed relocation. For those, 11 resettlement sites had been developed. According to data given by NHDC, over a third of the PAFs had been resettled by July 2006.

NBA, which is against hydro projects on the Narmada river, became involved in protesting against Omkareshwar because the project was stated to submerge over 5800ha of forest land, while displacing a large population from its traditional habitats and arable fields. It also suggested that there was a lack of assessment by the project authorities of the ecological damage that would be caused by the project.

In an interesting corollary, the attention of some overseas ecology groups was also drawn to the project. In June 2004, an Amsterdam-based NGO, BankTrack, listed it as one of the ‘controversial’ projects which was allowed to go ahead without changes, despite it violating the guidelines on which the Equator Principles had been based (see box text).

According to BankTrack, one of the banks which adopted the Equator Principles – Barclays – had advised and assisted Omkareshwar despite the fact that the project, according to BankTrack, was in violation of five of the World Bank/IFC guidelines on which the Equator Principles had evolved. It also said that Barclays, while not lending directly to the project, had helped in arranging a £28M loan to NHPC, which was one of the two equity-holders of NHDC. Later, in January 2005, another NGO, Friends of the Earth, also castigated Barclays on the same count, while contending that three other Equator banks – ABN Amro, Deutsche, and Calyon – had declined to come to the aid of Omkareshwar. In its response to such allegations, Barclays was quoted as stating: ‘As Barclays is neither providing finance for the project nor arranging finance, we cannot comment further.’

In the event, in June 2005 NHDC negotiated a loan of Rs 13.5B (approximately US$330M) from a consortium of 11 Indian banks, led by Union Bank of India, thus tying up all the debt requirement of the Project. The equity portion of Rs 6.13B was to come jointly from the two shareholders of NHDC – the State Government of Madhya Pradesh and NHPC. The irrigation component of the project was, as per practice, to be funded by the State Government from its budget. The aggregate sanctioned cost of Omkareshwar was Rs 22.25B (about US$542M).

Petition to the High Court

With the project developers having signed its EPC contract and achieving financial closure, NBA and some of the PFAs decided to petition the State High Court of Madhya Pradesh, pointing inter alia to the deficiencies in the implementation of the R&R plan by the State Government while NHDC was pushing ahead with execution of the project. It also pleaded that until these lacunae were rectified, NHDC should be not allowed to raise the reservoir-level by closing its gates. In its order of 18 May 2007, the High Court, while considering the petition, granted the plea against the closure of gates, stating that they should not be closed until all affected villagers had been resettled.

If implemented, the High Court’s order would have caused a serious setback to NHDC’s programme of testing the power units and commissioning the project, which was near completion. NHDC and the State government therefore decided to appeal to the Supreme Court of India.

The developers pleaded the necessity of the gates-closure in order to raise the reservoir level to a height of 189m. They also stated that the NGOs had misrepresented facts to the High Court. According to the appellants, out of the 30 project villages, 25 would remain unaffected until the 189m level was reached, while the remaining five had been already been resettled.

After hearing the parties, India’s highest court set aside the order of the State High Court and allowed NHDC to close the gates to reach the reservoir level of 189m. Since then, the first 65MW unit of the project has been commissioned, while, at the time of writing, the second unit was undergoing a trial run. The State Energy Minister told press reporters on 23 July that at the current water level, only one unit could be run at a time. However, it would enable all eight units to be tested piece-meal, ready for commissioning at the end of November 2007. By that time, the State Government hopes to complete the balance of the resettlement work, while obtaining permission to raise the reservoir level to at least 193.6m, enabling the eight units to operate together.

The NBA was obviously disappointed by the Supreme Courts order. In protest, it organized a sit-in by some PAFs, together with demonstrations at the State capital, Bhopal. In a statement, the NGO said it wanted:

* Grant of agricultural land to the farmers among the project affected families.

* Land to landless families, as per a condition stipulated in the ecological approval given to the project by the government.

* Land to the adult children of PAFs, as laid down in the resettlement plan of 1993.

* Better facilities, including potable water, at the resettlement sites.

In response, the State government stated that it had organised village-level committees, including representatives of the PAFs, to assist in and oversee the resettlement work.

While the main case had been remitted by the Supreme Court back to the High Court for a decision, with hearings underway in the latter, according to a senior official on the scheme, ‘the project will be ready for commissioning before the year is out’. The only point of contention, said the official, could be the adequacy of the resettlement packages which, in quite a few Indian hydro projects, often remains unsettled for years after they are commissioned. Looking at the current scenario, this optimism about Omkareshwar is not entirely misplaced.

On 4 June 2003, a group of ten international banks had come together to adopt what were termed as ‘Equator Principles’ of project financing. These were based on a set of guidelines relating to ecological and social risks in a project, which had been drawn up by the World Bank and its private-funding arm, IFC. Under these, all projects of above US$50M were to be categorized as A, B, or C, depending on whether such risks were high, middle, or low. All A and B category projects would need to gain an EIA prior to being considered for funding by the Equator banks.
Since then, a number of other financial institutions have adopted the principles, and a number of amendments have been instigated.
For further information on the principles, visit www.equator-principles.com.

Main features of the Omkareshwar project

View of Omkareshwar dam, which is currently near completion Dam The Supreme Court’s judgement allowed the developers of Omkareshwar to conduct test and a trial run of the project Units View of the Omkareshwar project under construction Construction site