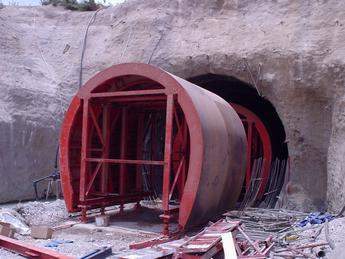 Despite an earlier delay when it looked as though the project was at risk of not going ahead, the construction of the Chabrouh dam near the ski resort of Faraya in the Kesrwan district, north of Beirut, is now well underway. The new US$44M project is being built by French civil engineering company Duzem-GTM, part of the Vinci group, and Lebanon’s Moawad-Edde SARL construction company. Located 2000m up in the Lebanon Mountains, it is midway between Lebanon’s Mediterranean Sea coastline to the west and the Bekaa Valley to the east.

Due to the challenging terrain and the need to complete the dam in the shortest possible time, the consortium undertaking the project was eager to adopt fast-track construction techniques. However, while the formwork solutions had to be sufficiently sophisticated to meet the project’s technical demands, they had to be achievable within the time, cost and manpower constraints. Nowhere was this more so than when it came to the construction of the tunnels and shafts – an integral part of any hydroelectric power scheme.

To help achieve its aims, the consortium turned to formwork and falsework provider RMD Kwikform to develop solutions. Calling on its experience gained on similar water-related and tunnel projects undertaken throughout the world, RMD Kwikform’s engineers worked closely from the outset of the project with Moawad-Edde’s engineering team. The solutions they developed included four purpose designed and built mobile tunnel forms. These were moved on high load capacity skates that ran on rails laid by the contractor. These forms ranged in size from 2.3m wide by 3m high, up to 4m wide by 4.5m high. The solutions package also included special self-supporting formwork for a 7.5m diameter vertical shaft.

Typically, the tunnels at the Chabrouh dam are horseshoe shaped with a flat base, although the shape and geometry of each tunnel differs so much that RMD Kwikform engineers produced shuttering solutions that were tailored to each tunnel.

For example, in one instance the mobile tunnel form comprised three steel shutters that were manufactured to match the precise shape of the tunnel. These steel shutters were hinge-jointed one to another, which allowed the two lower sections of shuttering to be released once the concrete tunnel liner had cured. The upper section of steel shuttering was supported by a steel frame that was mounted onto RMD Kwikform’s proprietary Megashor hydraulic jacks. These jacks enabled the top section of shuttering to be lowered from the concrete face, so enabling the form to be moved forward to the next concrete pour position, as the entire load of the 4m long shuttering and support framework was transferred to the skates.

While this style of steel form was used on all of the Chabrouh dam tunnels, the number of shutter sections varied between three and five. The technique for positioning, stripping and moving the formwork also differed, dependent upon the shape and size of the tunnel. In most cases, where the sides of the tunnel are often vertical, instead of utilising the steel frame mounted on hydraulic jacks, specially designed travellers were utilised. In these instances, the wheel-mounted traveller located the form into its required position. The lower sections of shuttering were then correctly positioned using turnbuckles mounted on the traveller, before raising the entire form into its final position using base jacks located beneath the lower sections of shuttering. The traveller was then removed and the form was supported by the hydraulic base jacks and horizontal struts.

When the concrete tunnel liner had cured, the installation process was reversed to allow the form to be moved to its next location. The internal strutting was removed, the traveller was reintroduced and the hydraulic jacks were lowered and removed. At this point, the form’s entire weight was again transferred to the traveller. The bottom side shutters were freed using the traveller’s turnbuckles, as were the top sections of shuttering. The traveller then carried the form to the next position.

The formwork for the 7.5m vertical shaft utilised an entirely different technique. This time the formwork was crane-lifted from the bottom of the shaft; it was self-supporting throughout the concrete pouring operations, using what are known as click-clack brackets – sometimes spelt klik-klack– that were mounted on an internal formwork platform. The solution relied on the formwork being supported off click-clack pockets or shoes that were anchored to the cured concrete lining below the level where the concrete was currently being poured or was curing. As the formwork was raised in the Chabrouh dam shaft’s case, in 3m intervals the click-clack brackets disengaged from the pockets, and re-engaged in the brackets at the new higher level. Once the form had progressed sufficiently up the shaft to the third pour – an access platform was suspended below the main formwork deck to enable the now-redundant click-clack pockets to be removed and for the face of the concrete to be made good.

As with the tunnel formwork, the form for the Chabrouh dam’s shaft was specially manufactured as six separate curved shuttering panels. Utilising a series of turnbuckles and push-pull props, the shuttering panels were positioned in readiness for concrete pouring, and were released from the cured concrete face prior to the form being crane lifted to the next position where the click-clack brackets were, again, re-engaged.