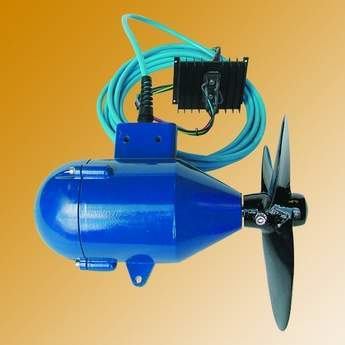 The UW 100 submerged generator has been manufactured by Ampair for 20 years. It is a three-bladed turbine intended for use in fast flowing water, requiring zero head, and is used worldwide to supply battery systems as an alternative to solar panels or a diesel generator.

The UW 100 generates a maximum of 100W of DC current at 12V, 24V, or 48V. The turbine is 312mm diameter and the generator body is 139mm in diameter which reveals the design’s origin as suiting a nominal 6in turbine and a nominal 5in generator.

The radial flux permanent magnet generator is housed within a pressure compensated oil filled cast aluminium casing. The casing is extremely well sealed, with dual redundant seals throughout, and there are only two transits into the generator section: firstly for the turbine shaft and secondly for the electrical cable. The turbine is bi-directional but because of flow obstruction by the body it is most efficient if facing into the current.

The electrical output is a four-wire cable carrying AC that is taken to the external rectifier mounted on a heatsink in a dry location, such as in a waterproof enclosure or in a suitable building. This rectifier and heatsink is supplied with the UW as is the first 5m of cable which is a waterproof marine grade section. Additional cable must be joined onto this to reach the battery location and the additional cable must be large enough that the voltage drop is kept within safe and economical limits.

The DC output from the rectifier is ordinarily fed into a battery bank, often via a battery charge controller. The battery output then feeds DC loads or a sine wave inverter that supplies 115 or 230V AC loads. It is necessary to match the turbine voltage to the battery bank, for example a 12V turbine for a 12V battery bank.

The cut-in speed of the UW is 1m/sec (2 knots) but Ampair do not recommend installation below 1.5m/sec because most clients overestimate their average water speed. Maximum water speed with the standard prop is 4m/sec (8 knots) and a low RPM prop is manufactured for very high water speeds of up to 7m/sec (14 knots). Depending on water temperature the UW can be oversped without damage.

What are the best applications for the UW?

The UW submerged generator was developed for use in oceanographic research vessels which need to stream instrumented floats on long tow lines behind the ships, and need to power scientific equipment and navigation lights on the floats without running a power cable down the tow line. The small float area meant that solar panels were inadequate and so the users asked Ampair to develop an alternative.

Initially they used the Aquair towed generator which has a 30m long towed turbine dangling behind and underneath the float. But this was impractical in shallow waters which is why the UW was developed as a more compact alternative.

The scarcity of very low-head pico hydro products available on the commercial market mean that other users have also taken to the UW generator for use in what Ampair term the ‘land’ market. As any user of solar or wind will tell you, a 100W generator may not sound very powerful until the 99% capacity factor of the UW is taken into account, and compared with the very low capacity factor of small scale solar (typically 10-20%) or wind (typically 5-10%). In the company’s experience all successful UW users are characterised by the following environmental conditions:

Because of these characteristics the many enquiries from coastal locations are almost always unattractive. In practice most tidal streams rarely peak above 3-knots at pier ends which are the only locations where the cable run constraint can be achieved. Furthermore these are peak tidal speeds and the daily average tidal speed is typically only one knot.

Obviously mountainous areas tend to be hard enough rock to withstand the erosive flow rates required for success. But even then the cable length constraint eliminates many high speed mountainous streams because storm events can flood battery houses located adjacent to the stream bank. If the stream is small enough to remain within its bank then many streams are simply too shallow.

The most successful land market users tend to be industrial clients who are already working in the hydro sector and seeking dependable power for instrumentation such as water quality, water speed, depth, or fish counters. These tend to be used for reservoir outlet or canal mid-point monitoring by utilities or environmental and defence agencies. Ampair always recommend installing the UW in conjunction with solar panels as experience is that in the summer months water velocity is low and the sun is strong, whilst in the winter the sun is weak or non-existent and the water velocity is high.

Another client sector that has some success is the domestic user in the polar regions where there is no sun in mid-winter, and where they have small streams that continue to flow under ice cover. Obviously mill streams are a possibility but in practice they either have sufficient head to warrant a head-based generator, or are on-grid in which case the UW is not economically attractive. Ampair have built a grid-connected UW but it is not economic at present.

In all cases it is vital that the client constructs a suitable mounting solution. These vary widely to suit the many sites and are entirely at the client’s discretion as this is not an aspect that Ampair can become directly involved in. Typical mountings are: poles vertically down into the water, or occasionally vertically up from the bottom; gantries cantilevered from the bank, often with rigging braces; flow concentrators such as culverts that become submerged during floods; and moored floats.

Ampair continues to develop the UW series and in 2008 the turbine hub was upgraded to shroud the seals from damage caused by fishing line and fine weed. This year the new Ampair Voyager regulator is being released which includes an RS-232 output with battery monitoring functionality to assist interfacing with SCADA systems.

Further work with the UW series is always being considered but the investment must be commensurate with the necessarily limited market size. The company appreciates that the UW has a very low energy conversion efficiency but that is a necessity of it being an open stream device – if it had a higher efficiency the flow would stall and bypass the rotor – and this is a fundamental limitation that restricts the commercially attractive development opportunities.

Ampair is also taking its first steps into the head-based pico-hydro market with the HT-series of turbines for grid-connected clients and for battery charge clients. These are built to order and cover the market segment from 6m–20m of head and from 20l/sec – 60l/sec flow rate. The first is already installed in southeast UK producing 300W into the grid from 6m at 18l/sec which is typical of a small overshot mill wheel site.