Thanks to the acquisition of Alstom power plant and services businesses, completed in November 2015, GE – previously focused predominantly on gas turbines – has become a major player in the wider power plant services business, with the capabilities to service a large range of equipment supplied by “other original equipment manufacturers” (oOEMs). GE Power Services, based in Alstom’s former offices in Baden, Switzerland, says it is “able to support more than 90 OEM brands across all major plant assets.” 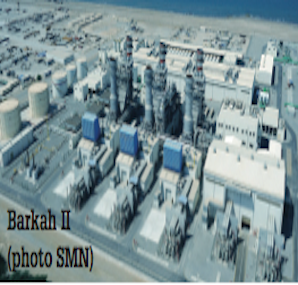 Thanks to the acquisition of Alstom power plant and services businesses, completed in November 2015, GE – previously focused predominantly on gas turbines – has become a major player in the wider power plant services business, with the capabilities to service a large range of equipment supplied by “other original equipment manufacturers” (oOEMs). GE Power Services, based in Alstom’s former offices in Baden, Switzerland, says it is “able to support more than 90 OEM brands across all major plant assets.”

One particular area of in-depth expertise arising from the Alstom purchase is generator technology, including repair, life extension and health monitoring. GE says it can “service any type of generator”, ie, more than 30 OEM brands, and can point to recent projects in Oman and Hungary to illustrate its capabilities.

In autumn 2016 the Barka II power and desalination plant, with an installed electrical capacity of 678 MWe and a potable water output of 120 000 m3/d, suffered a forced outage arising from a phase-to-phase fault at the phase lead connections, on the stator side. The plant, which went started operation in 2003, is located 50 km from Muscat and is of considerable strategic importance. It is owned by SMN Barka Power Company SAOC, a subsidiary of SMN Power Holding Company, itself owned by GDF Suez of France, Mubadala of Abu Dhabi (UAE) and National Trading Company of Oman.

The plant is operated and maintained by STOMO (Suez-Tractebel Operation & Maintenance Oman LLC) under a 15 year agreement with SMN. Following a tender process after the shutdown, GE Power Services was awarded a contract by STOMO covering stator rewinding, high-speed balancing of the rotor and implementation of digitally based continuous health monitoring of the generators at Barka II.

The project is described by Thomas Lenze of GE Power Services as “a first of a kind” for GE in the Middle East, involving provision of fast response services for an oOEM generator, an Ansaldo WY21Z-092 machine.

The generator stator rewind – which is expected to extend the asset’s life for about 20 years – was conducted on-site, and, as Lenze points out, GE was able to capitalise on its local presence by undertaking inspection services and high-speed balancing of the rotor at its generator workshop in the United Arab Emirates, with significant savings in time.

Established in 2005, GE says the workshop is the only one of its kind in the Middle East, North Africa and Pakistan region that is equipped with a high-speed balancing facility. This allows rewinds to be tested at high speed, reducing the risks of failure during commissioning.

The provision of generator health monitoring – which provides continuous monitoring of partial discharge, rotor flux, rotor shaft voltage, end winding vibration, and stator temperature – should help to avoid similar forced outages in the future says Lenze. The health monitoring option selected for the Barka II generator consists of permanently installed sensors and data acquisition unit, data storage at the plant site, checks on demand as required, and a half yearly full report on the health of the generator.

Meanwhile, in Hungary, at the 2000 MW Paks nuclear plant, 100 km from Budapest, which consists of four Russian supplied VVER-440 pressurised water reactors, GE has recently announced the completion of a fifth generator refurbishment, part of a programme to upgrade the plant’s eight Ganz-supplied 250 MW generators – one per year from 2013 to 2021, plus a spare – extending generator life by about 20 years. The generators were commissioned between 1982 and 1987.

The Paks project once again demonstrates GE’s oOEM capabilities as well as its ability to draw on a strong regional presence.

GE performed the refurbishment work at its generator services facility in Budapest, while high-speed balancing of the generators was performed at GE’s facility in Wroclaw, Poland.

The Paks plant is owned and operated by MVM Paks Nuclear Power Plant Ltd, a subsidiary of state-owned MVM Hungarian Electricity Ltd. In 2012, Paks unit 1’s operating life was extended to 2032 and subsequently unit 2’s to 2034.

Units 3 and 4 are expected to be granted similar operating life extensions.