“Flow-back” from the H benefits 9FB and 6C 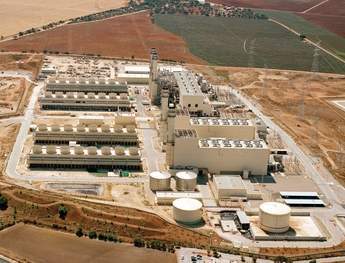 The first 50 Hz plant to use GE’s FB gas turbine technology achieved full load operation late last year. Design validation testing of two 9FBs began in September at Iberdrola’s Arcos de la Frontera plant and concluded a couple of months later with the gas turbines meeting or exceeding all performance and emissions expectations. The two units are due to undergo contracted guarantee and reliability runs in the early part of 2006, leading to commercial operation.

These two lead 9FBs are part of an 800 MWe GE-supplied two-on-one combined cycle plant (designated 209FB in the GE nomenclature), which also includes a D11 steam turbine, three 330H generators and two HRSGs. This new plant is called Group III of Arcos de la Frontera, which is located in the province of Cadiz, between Sevilla and Campo de Gibraltar. The earlier phases, Arcos I and II, already in operation, are both 400 MWe single-shaft combined cycle units employing 9FA gas turbines.

Described by GE as “one of the world’s most advanced air-cooled 50 Hz gas turbines”, the 9FB, is the latest evolutionary step in the development of GE’s F technology (which was initially designed in the 1980s, with first unit entering commercial service in 1990). The 60 Hz version of the FB, the 7FB, was introduced around five years ago and there are now eight of these in operation. As well as increased pressure ratio the FB also has a firing temperature that is 100°F higher than that of the FA. The latter leads to a 1 percentage point rise in combined cycle efficiency, with output increased by 5%. To accommodate the higher firing temperature without increased maintenance intervals, advanced turbine materials, notably first-stage buckets of GE Aircraft Engines’ single crystal alloy, as employed in the H machine, are used.

This is an example of what GE calls technology “flow-back”, in this case from H technology into the F platform.

At the smaller end of the size range, similar flow-back, including use of single crystal material, is also evident in GE’s 40 MW class Frame 6C gas turbine. The first combined cycle plant based on the 6C – a GE 206C package, with two 6C gas turbine generating sets plus a GE steam turbine-generator – has just entered commercial service in Turkey. Installed at the Kemalpasa power plant in Izmir, the facility is owned and operated by Akenerji of Istanbul.

Performance testing of the new combined cycle system was completed successfully on 2 November 2005, and Turkish Ministry of Energy and National Resources tests were successfully completed on 9 November.

“Efficiency has become the key driver for profitability in high fuel price, competitive markets and the 6C is an ideal fit for mid-size applications in such situations,” according to Akenerji General Manager Onder Karaduman.

Also launched in 2002 (see MPS, September 2002, pp24-25), the Frame 6C builds on GE’s Frame 6B technology and like the 6B uses a gearbox to accommodate both 50 Hz and 60 Hz grids. The new machine also incorporates fuel flexibility, reliability/availability and maintenance features from GE’s F technology gas turbines. The 6C offers an improvement of five percentage points in simple-cycle efficiency over the 6B. The 6C is optimised for heat recovery efficiency, with exhaust gases flowing through a lateral exhaust. The 206C combined cycle plant has an efficiency of 54% with an output of 130 MWe.

While the emission limits for the Kemalpasa project are 25 ppm NOx (on natural gas), GE says the 6C is capable of 15 ppm NOx and 9 ppm CO dry, in the power range from baseload down to less than 50% load.