Floated – on the market

The number of FPSO vessels continues to increase around the world, despite financial issues, time delays, fires and leaks. World Expro takes a look at the global goings on – from Africa to Europe, Asia to North America, where companies are investing in FPSO vessels to increase their gas and oil production, and sustain it into the future. 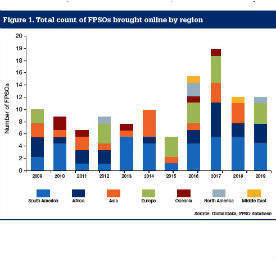 Ghana has begun building its third FPSO vessel in a move to make the country an oil hub in West Africa. This comes after the country completed the OCTP Sankofa gas project negotiations at a cost of $7 billion, which was endorsed by the World Bank and IFC. The FPSO construction, which is due to be completed and delivered by the last quarter of 2016, is expected to produce 45,000bopd by 2017 and 170MMcf of gas by 2018. Eni and Vitol operate the Sankofa fields, and the Ghana National Petroleum Corporation (GNPC) is partnering with them on Ghana’s behalf.

Minister of Petroleum Emmanuel Armah Kofi Buah says: "The OCTP Sankofa gas project has been negotiated and concluded," adding that the upstream petroleum sector is a major contributor to Ghana’s gross domestic product (GDP), second to the mining sector.

"The sector is one that has helped shape our economy in times when we have had challenges. This has led to the 5% growth that the World Bank is projecting for the country, happening at a time when the subregion, and the African continent, is projected to grow at a slower pace."

Bonga phase III is an expansion of the main development, with peak production expected to be 50Mboe. This will be transported through existing pipelines to the Bonga FPSO facility, which has the capacity to produce more than 200,000bopd and 150MMcf of gas a day.

The Bonga field, which began producing oil and gas in 2005, was Nigeria’s first deepwater development in depths of more than 1,000m, and has yielded over 600MMbbl. SNEPCo operates Bonga under a production-sharing contract with Nigerian National Petroleum, which holds the lease for OML 118, where the Bonga field is located. SNEPCo holds a 55.0% contractor interest in OML 118. Other co-venturers are Esso Exploration & Production Nigeria (20.0%), Total E&P Nigeria (12.5%) and Nigerian Agip Exploration (12.5%).

Husky Energy and its partners have achieved a significant milestone in advancing Madura Strait BD-gas-condensate field’s production off the coast of Indonesia. The jacket and well-head platform for the gas development, which is rich in liquids, have been successfully installed in about 55m of water. Development drilling is expected to commence soon, with the project on target for first production in 2017.

The BD field is the first of a series of offshore gas developments the company is advancing in Indonesia. Fixed-price, set-volume sales agreements are in place for the BD field, which is expected to produce net peak production of about 40MMcf of gas a day and 2.4Mboe a day.

"Our Indonesia gas developments represent some of the strongest growth opportunities in our deep portfolio and are particularly strategic in the current commodity price environment," says CEO Asim Ghosh.

Construction of an FPSO vessel to process gas and liquids from the field is 30% complete, and all major long-lead-time items have been ordered. The company continues to progress with its series of other offshore gas developments in the area; these are expected to add production between 2017 and 2019. A tendering process is under way for an FPSO, and related engineering, procurement, construction and installation contracts for the combined MDA-MBH fields, also located in the Madura Strait.

The MDA-MBH fields are expected to produce about 50MMcf of gas a day at peak production, and a fixed-price, set-volume sales agreement is in place. The MDK field will be tied to the MDA-MBH field infrastructure. A development plan has been approved, and the field is expected to produce net 10MMcf of gas a day at its peak. A gas price/volume contract is currently being negotiated.

In the longer term, Husky Energy has four other Madura Strait discoveries that are under evaluation for development. The company holds a 40% interest in all of the Indonesian projects, which will be developed in partnership with CNOOC, as the operator, as well as an affiliate of Samudra Energy.

In addition to offshore developments, Husky has several projects in production and under development off the coast of China. The Liwan Gas Project in the South China Sea continues to deliver steady production, averaging a gross of 295MMcf a day and associated liquids of about 14.8Mboe a day consisting of 153MMcf a day and 8,300boe a day net to Husky).

Negotiations for the sale of gas and liquids from Liuhua 29-1, which is a third field that is associated with the development, continue to be pursued. Husky also holds a 40% working interest in the Wenchang oil field, located in the Pearl River Mouth Basin about 400km south-west of Hong Kong.

Australian company Woodside has awarded a front-end engineering and design (FEED) contract to Aibel for the subsea tie-back to the Ngujima-Yin FPSO. The Greater Enfield Development comprises the subsea tie-back of the Ngujima-Yin FPSO. The FPSO will undergo modifications to the topsides, hull and turret. Aibel’s scope of work includes management, engineering and provision of procurement services for FEED. The contract also holds an option for the project’s execution phase.

Our Indonesia gas developments represent some of the strongest growth opportunities in our deep portfolio and are particularly strategic in the current commodity price environment.

"This is an important assignment for Aibel, allowing us to further grow our experience within FPSO deliveries," Nils Arne Hatleskog, from EVP Field Development, says. "Aibel Singapore has, through several individual projects, been proven to deliver great results. I am confident they will do the same this time."

Woodside Energy is a new client for Aibel Singapore. Ramalingom Venkateswaran, general manager of Aibel’s Singapore office, explains: "Through this assignment, we get the opportunity to work directly with Australia’s largest independent oil and gas company. I hope this may become the start of Aibel providing services for their future green and brownfield requirements."

Two and a half years after the project was sanctioned, production has commenced from Smørbukk South Extension. The offshore project at the Asgard field is a world-class project in production from tight formations. Through a combination of wells with long well sections and new completion technology, oil and gas are produced from a reservoir that was previously regarded as unfeasible. The reserves in the Smørbukk South Extension project are estimated to be 16.5MMboe and will contribute significantly to the production from the Asgard A FPSO.

The field was discovered in 1985 but, due to low permeability, the volumes weren’t regarded as being economically viable. The hydrocarbons are located in reservoirs with varying porosity, ranging from "bricks to tiles", said asset-owner representative Ove Andre Pettersen. "This has been a world-class challenge. Very few offshore fields have been developed with such low permeability under normal pressure conditions."

The main solution for tight reservoirs is to drill long, horizontal reservoir sections. At Smørbukk South Extention, a multilateral production well with a reservoir of approximately 5,200m of exposure has been drilled. Using existing infrastructure at the Asgard field has been a precondition for the feasibility and profitability of the project.

Pettersen complimented the cooperation among the involved parties in Statoil, saying that "the cost estimate was the same on the date of the start up. The future of the NCS is, to a large degree, dependent on cost-efficient development of important projects such as Smørbukk South Extension."

Canada’s Suncor Energy has suspended operations at its FPSO vessel in the Terra Nova oil and gas field, approximately 350km south-east of St John’s, Newfoundland and Labrador. This comes after a methanol leak and a small fire, CBC News reported. According to the Canada-Newfoundland and Labrador Offshore Petroleum Board (C-NLOPB), 3,000L of methanol was released into the North Atlantic Ocean from Suncor’s subsea drill centre. Suncor Energy was alerted to the incident when a small flame became visible on the insulation blanket for the lower medium-pressure-turret swivel due to the creation of an arc in an electrical circuit. The company said that the fire was put out and the circuit was isolated.

The Terra Nova vessel can store up to 960Mbbl and accommodate up to 120 personnel while producing.

Global FPSOs – where, when and whom

Globally, 60 FPSOs are expected to start operation by 2019, though spending cuts to offshore oil and gas capital expenditure due to low crude oil prices have delayed starts or caused cancellations.

South America leads planned additions globally with 18 FPSOs, followed by Africa and Europe, each with 12 FPSOs. Asia, North America and the Middle East are expected to deploy seven, three and two FPSOs respectively by 2019.

Brazil will spearhead global deployment with 17 FPSOs by 2019. FPSO Cidade de Itaguai MV26 started operations in the third quarter of 2015. Petrobras will drive the FPSO industry with planned deployment of 17 FPSOs by 2019, down from the planned 25 from last quarter. Petrobras’s plans to develop offshore pre-salt fields have suffered a setback as the company posted its biggest ever loss in 2014, resulting in spending cuts on the planned projects. Corruption charges levelled against the company were one reason for the loss.

Offshore projects in the North Sea and the Barents Sea will lead deployments in Europe. The UK has planned deployment of eight FPSOs by 2019. Angola, Nigeria and Ghana are expected to deploy six, four and two FPSOs respectively by 2019.