Flexibility is the key

Thanks to their operational flexibility reciprocating engines have a key role to play in maintaining stability in a renewables dominated grid. 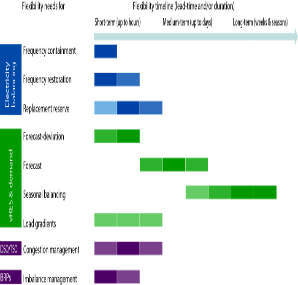 “In Denmark, with its high share of wind power, we will see situations in the near future when up to 90% of thermal generation will need to ramp up and down within one hour”, said Angela Pietroni, head of market intelligence at Energy Brainpool, during a presentation of the new study in the European Parliament.

“With the political process that will determine the future design of the European electricity market reaching its decisive phase”, EUGINE and Brainpool say they have published their analysis “of the key ability needed for the stability of a renewables dominated energy system: flexibility.”

The study provides evidence that a variety of different flexibility options will be needed to match the different challenges posed by balancing demand and supply in Europe’s electricity market, from short term to long term. Operators will have to choose the right option according to the specific circumstances of the moment, with reaction time, duration needed and costs of cyclical operation becoming key considerations in the decision, say EUGINE and Brainpool.

Their simulation of the situation for Denmark and the four largest EU markets in 2030 suggests that by that time large amounts of available steerable power will need to start-up quickly to balance the fluctuating availability of electricity from wind and sun – despite growth in storage and grid expansion.

According to the simulation for Germany the number of start–stop cycles required of balancing power plants will grow from 38 cycles in 2015 to about 744 cycles in 2030. This will require fast and efficiently adapting power generation capacity, as offered by modular gas engine power plants.

“The study and the simulation prove that reciprocating engine based power plants are the best match for flexible power generation.” says EUGINE president, Kari Hietanen (of Wärtsilä). “What is needed urgently is a change in mindset for the electricity market framework as suggested by the European Commission: providing flexibility instead of capacity must be rewarded – and in a technology neutral way.”

It is the ongoing decarbonisation of the energy sector that is driving the need for flexibility in electricity markets, the new report notes, with decentralised and fluctuating solar and wind feed-in substituting more and more power from central, steerable and often fossil-fired power plants.

Supplying flexibility will become a key role for all actors in energy-related sectors, with steerable power plants, demand, energy storage, heating and mobility applications needing to contribute different types of flexibility. Short-term electricity balancing, congestion management and imbalance management need to be done in a regime with fluctuating and unknown supply and demand. Forecast-deviations are high when the dispatch is planned day-ahead, with the deviation of forecasted wind feed-in about 5% of the installed onshore capacity on average, the study says. Over-supply with low residual loads will occur as well as high residual loads (residual meaning the load not met by renewables). Thus medium-term flexibility is needed as well. Even seasonal balancing will become more and more important with very high shares of variable renewable energies: when averaged over 31 days the power generated by renewables could fluctuate from 4% of installed capacity based on weather data for summer 1994 to 61% assuming the weather-data of winter 2006/2007, the study notes.

The different flexibility sources are as different as these flexibility needs, says the report, with start–stop cycles, reaction time, fixed and variable costs, start-up capability and operation range identified as crucial factors, and there is no single flexibility option meeting all these flexibility needs efficiently. Best performance is provided by having a mix of different options. Batteries are suitable for providing frequency control energy, as they have the quickest reaction time. The potential of demand-side management for increasing load is greater than for decreasing load, where consumer habits tend to strongly restrict long-lasting load reductions, the report says. Only when taking into account heat and mobility will demand side management play a major role in providing medium term flexibility, the analysis suggests. E-mobility could balance residual load fluctuations at the daily level and power-to-heat in combination with heat storage could reduce short-term temperature-dependencies in the electricity sector. Pumped hydro power plants are a mature and cost-efficient flexibility option for short and medium-term applications, but their capacity is limited by geological and geographical conditions. Power-to-gas/-liquids, as an electricity consumer, provides downward short-term and medium-term flexibility, while its products are storable on a seasonal basis, and in combination with the gas infrastructure and gas-fired power plants, provide an upward flexibility option from short- to long-term.

A role for pistons

Piston engine power plants have been identified as being able to perform a lot of start–stop cycles, operate at high efficiency in part load and flexible in terms of the fuel- types they can use. The reaction time from command to full load is one to five minutes, with large units consisting of many small units built up on a modular basis. This modular character of reciprocating engine based power plants means they can meet a number different flexibility needs, the report says. Small-scale flexibility for grid stabilisation as well as larger scale utilisation of piston based power plants provide different benefits for the power system.

For heavy duty gas turbines, the minimum ranges between 20% and 40% of rated capacity, but with this high flexibility comes a loss in power plant efficiency of roughly 15 percentage points when operating at minimum load. Large gas turbines generally have the lowest fixed cost on a per-MW basis, but low efficiencies at minimum load. When it comes to higher utilisation rates at full load and less start–stop cycles, combined cycle plants with high maximum load efficiencies (but higher fixed cost) are cost- and energy-efficient. Assuming even higher utilisation rates, low carbon prices and low or medium shares of wind and solar, power plants operating with coal, lignite and nuclear plants can provide the residual baseload cost-efficiently. In future energy systems, the share of each technology needs to be adapted to meet flexibility requirements.

The EUGINE/Brainpool study includes quantitative analysis employing a European energy market model, Power2Sim, which helps to gain a more precise picture of these flexibility needs: basically, fluctuating energy sources require residual loads to be more flexible than in the past. In 2030, up to about 30% of the fossil-fired generating capacity in in Germany, France, Spain and Italy will need to ramp-up and down. Therefore situations that challenge the power system will become more normal, the report suggests. These results assume that interconnector capacities develop as planned and are open to the markets, and for example pumped-hydro storage capacity expands.

The Power2Sim simulation of European electricity markets shows that, for example, in Spain the proportion of fossil fuelled power plants operating for 100 hours per year with the highest hourly load-ramps will rise from 10% in 2015 to 22.5% in 2030. In Denmark, a country with a high share of wind energy, this value is already between 30% and 50%. According to the model, during some hours in 2030, as much as 90% of the fossil fired generating capacity is ramped up. Consequently, the number of start– stop cycles will increase as well. In 2015 we saw 80, 38 and 56 (averaged historical values) cycles, respectively, in French, German and Spanish gas-fired power plants. As already noted it was found that in Germany power plants supplying daily peaks need to cycle 744 times in the year 2030 just in order to follow the hourly residual load. Supplying balancing energy and following price signals of intraday-markets are important factors for start-stop cycles as well. This could even increase the number of cycles.

The capabilities for and costs of cycling, ramping up or down and part load efficiency will become more and more critical parameters for power plants, the EUGINE/ Brainpool study concludes. Consequently, levelised costs of electricity depend strongly on the use case. For plants operating in baseload mode, with full load hours of 6000 and running at 90% of full load the averaged and levelised cost of electricity from coal power plants and combined cycle plants is the lowest, at 54 euro/MWh and 49 euro/ MWh, respectively. The exact levelised cost depends on an individual power plant’s efficiency, as well as coal, gas and carbon prices. This use case is becoming less frequent due to the energy transition, the EUGINE/Brainpool report notes. Assuming flexible usage (1500 full load hours per year, 700 cycles per year and a turn down to50%offullload)levelisedcostsrisedue to the lower utilisation of fixed investment and other fixed cost, due to start–stop costs and due to lower efficiencies in part load operation. For this use case the average and levelised cost of open cycle gas turbines rises (to around 110 euro/MWh) and piston engine based power plants (at 86 euro/ MWh) are estimated to have the lowest costs, according to the EUGINE/Brainpool study.