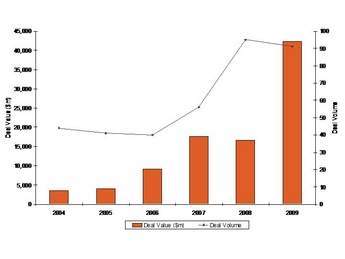 Hydropower has been a key renewable source of energy in the US, accounting for 61.58% of the total power generated from all renewable sources in 2009. It also dominated the US’ total installed capacity for renewable power with a share of nearly 66.32% in the same year. Meanwhile hydro’s cumulative installed capacity had reached 101,355MW in 2009 from 95,844MW in 2001. By 2020, hydro generation capacity is expected to reach 112,403MW.

With government focus on other renewables and increasing installations of wind, solar and bio-energy facilities across the country, hydro’s share in renewable power generation capacity is likely to decline. This is expected to fall to 27.73% by 2020 from 66.32% in 2009. Furthermore hydro’s share of total renewable energy sources is expected to decline to nearly 22.80% by 2020.

Along with detailed information on the regulatory framework and key policies governing the industry, the report provides a comprehensive understanding of the market for hydropower in the countries.

The reports were compiled from data and information sourced from proprietary databases, primary and secondary research and in-house analysis by GlobalData’s team of industry experts.