Wall panels are a complex and vital component of the ITER fusion reactor. The panels are made up of two sections that provide plasma protection and heat transfer, respectively. Prototypes are now being manufactured. 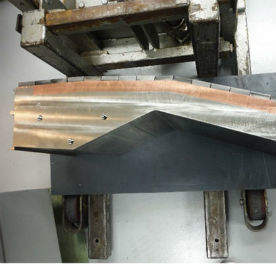 ITER is based on the ‘tokamak’ concept of magnetic confinement, in which the plasma is contained in a doughnut-shaped vacuum vessel. The fuel – a mixture of deuterium and tritium, two isotopes of hydrogen – is heated to more than 150 million °C, to form a hot plasma. Strong magnetic fields are used to keep the plasma away from the walls; these are produced by superconducting coils surrounding the vessel, and by an electrical current through the plasma.

The blanket covers the interior surfaces of the vacuum vessel, shielding the vessel and the superconducting magnets from the heat and neutron flux of the fusion reaction. The neutrons are slowed down in the blanket where their kinetic energy is transformed into heat energy and collected by the coolant. In a fusion power plant, this energy will be used for electrical power production.

For ease of maintenance on the interior of the vacuum vessel, the blanket wall is modular. It has 440 segments, each measuring 1×1.5m and weighing up to 4.6t. Each segment has a detachable first wall, which directly faces the plasma and removes the plasma heat load, and a semi-permanent blanket shield for neutron shielding.

The blanket is one of the most critical and technically challenging components in ITER because it directly faces the hot plasma. Because of its unique physical properties, beryllium has been chosen to cover the first wall. The rest of the blanket shield will be made of high- strength copper and stainless steel.

Advanced metal bonding techniques are required to join the metals in a way that meets the extreme physical and mechanical challenges posed by the hot plasma.

The blanket modules consist of a water-cooled austenitic 316L(N)- IG stainless steel (SS) shield block to which a separate first wall (FW) panel – which protects the ITER vessel from the plasma – is mechanically attached. The first wall is made of 440 panels with typical dimensions of 1.5m toroidally (around the doughnut) and 1m poloidally (towards the magnetic field poles), clad with 8-10mm thick beryllium armour tiles varying between 16 and 42 mm in size.

Toroidal plasma-facing units called "fingers" are cantilevered to a structural beam oriented in the poloidal direction. The beam is the structural backbone of the panel, both a mechanical supporting structure and a container for the interface with the shielding blocks, water connection and distribution to the fingers, along with electrical earthing and remote-handling compatible attachments. (see Fig. 1)

Two sets of fingers on each side of the beam form two beryllium- armoured wings, separated by a recessed poloidal slot giving access to the beam. The fingers have a typical length of 0.75m. They are made of layers of steel, copper alloy and beryllium. The steel base provides structural support, the copper alloy (CuCrZr) is the heat sink, and the beryllium is the armour. The water is fed through the steel, cooling the heat sink, and is returned to the finger extremity through the steel base.

In ITER, the fingers are designed to accommodate heat fluxes from 2MW/m2 (normal) to 4.7MW/m2 (enhanced), depending on the panel location in the first wall. The life of a FW panel in ITER is planned to be 15,000 cycles.

Panel fabrication has many challenging steps, including bonding the beryllium armour tiles to the copper alloy heat sink, manufacturing an intricate cooling circuit, integrating mechanical and hydraulic connections, and isolating the coatings.

Bonding the beryllium armour tile to the copper alloy heat sink is especially challenging, for two reasons. Beryllium and copper have different coefficients of thermal expansion, so large shear stresses develop in the bond when the temperature changes. The stresses grow very large, due to the singularity at the free edge of the bond.

The bonding is subject to temperatures changes of several hundred degrees during manufacturing and operation. The tile bonding joint must withstand stresses close to or beyond the yield strength. What is more, the phase diagram has brittle intermetallic and intermediate metastable phases.

This R&D phase has involved industrial companies such as Amec Foster Wheeler, which has been involved in the development of metal bonding techniques for fusion applications during the last ten years.

Recognising the need to bridge the gap from small scale prototypes to full scale manufacture and wishing to build on industrial IPR gained, F4E has encouraged Amec Foster Wheeler to participate in the next phase of the FW panel prototype development. Amec Foster Wheeler has worked with Iberdrola and MIB from Spain to bring together engineering development, fabrication and manufacturing experience in a strong team capable of prototype development and delivery, plus subsequent full-scale manufacture of the panels.

Fusion for Energy (F4E), the European Union’s Joint Undertaking for ITER, is undertaking a programme to demonstrate its capability to provide ITER with normal heat flux FW panels meeting quality and performance standards. The pre-qualification programme is based on small scale mock ups and a semi-prototype. Both are to be tested under the relevant heat load for a significant number of heat cycles.

The semi-prototype must demonstrate adequate bonding of a representative set of plasma-facing tiles. The design of the semi-prototype is approximately one-sixth of the FW panel size, representing six plasma-facing units, three facets, so 80-1000 tiles depending on the tile size. Both the cooling circuit and finger cross section are representative of the FW panel design, but the supporting structure and component water connection might differ from the design.

The semi-prototype comprises six full-scale fingers connected by a stainless steel base, which also serves as manifold for the distribution of the cooling water. It is an intermediate step between the smaller mock-ups built so far and the full-scale FW panel. Each finger is made of 36x42mm beryllium tiles bonded onto a 22mm-thick copper alloy substrate, which is fully joined to the supporting steel base and is cooled through two 12mm outer diameter stainless steel pipes. At the end of the finger the cooling water is collected in water boxes that distribute it in the return channel.

The following lessons were learned from this first full manufacturing exercise:

During finishing it became apparent that significant residual stresses are present as a consequence of the bonding processes. These led to some deformation of the component and it was necessary to consider the deformation in the final machining process to achieve the original design intent.

The available furnaces for HIP did not have acceptable reliability and important differences emerged between the reference pressure and temperature curves and those recorded during the actual cycles. A HIP facility qualification process will need to be implemented and closely followed.

Graphite was used to space the tiles during HIP and removing it from the area between the beryllium tiles after the HIP proved to be time consuming and difficult. It must be completely removed: even a very small amount sticking to the beryllium causes problems during performance tests and residual carbon is unacceptable in ITER due to its strong tritium retention. Cleaning of graphite will be specifically addressed starting from the design phase for the following steps.

Some machining steps were much longer than expected, so the design of the First Wall panel is being modified to take into consideration comments from the manufacturers to reduce cost, risk and time required.

Cutting the fingers has always been considered a critical operation. The first experimental data will be used to validate models under development to predict finger deformations as a result of the manufacturing sequence. The design could also include provisions to cope with finger deformations, for instance increasing the gap between the fingers to reduce the risk of the gap being too narrow at the end of the manufacturing.

Once the semi-prototype is manufactured it will be heat-flux tested. The resulting data will supplement those gathered from testing smaller predecessor mock-up components, which will take place in the next few months. This heat-flux testing follows successful tests on earlier Amec Foster Wheeler components.

In parallel with the heat-flux testing, a prototype full scale component is being manufactured. In addition to the Amec/Iberdrola/MIB consortium, in F4E has signed contracts with Atmostat of France, and AREVA to manufacture full-scale prototypes of a blanket first-wall panel.This involves producing smaller mock-ups and larger part-scale components, culminating in production and testing of a finalised ITER first wall panel meeting all the ITER design requirements about two years time.