Shore up support for wind: EWEA looks to the future

By 2020, offshore will make up 28% of the annual wind energy market, providing at least 4% of the EU’s electricity consumption. But 2020 is just a few short years away, and the European Wind Energy Association is calling for a new, longer-term target along with more stable support schemes, writes communications director Julian Scola. 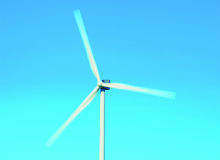 The European Union leads the world in offshore wind power, with over 4,000MW already installed, and yet it is just at the start of a major industrial development. In the first six months of 2012 alone, Europe installed and fully grid-connected 132 offshore wind turbines, with a combined capacity of 523.2MW – an increase of 175MW or 50% compared with the same period in 2011. The new additions brought the overall total to 1,503 offshore wind turbines fully grid-connected in 56 wind farms across 10 countries, with a total capacity of 4,336MW.

The new capacity was installed at Thornton Bank in Belgium; Greater Gabbard, Walney 2, Ormonde, London Array and Sheringham Shoal in the UK; Avedøre 2 in Denmark; and BARD Offshore 1 in Germany. At the mid-point of 2012, a further 160 turbines totalling 647.4MW were installed but awaiting grid connection.

Furthermore, by mid-2012, 270 offshore turbine foundations – a 109% increase on the same period last year – were installed in 10 wind farms: Thornton Bank 2 in Belgium; Lincs, London Array, Sheringham Shoal, Gwynt y Môr and Teesside in the UK; Anholt and Avedøre 2 in Denmark; and BARD Offshore 1 and Riffgat in Germany.

Besides this impressive increase in Europe’s offshore wind energy fleet, an important technology trend can be noted during this period. During the first six months of 2012, the average size of wind turbines reached 4MW – a rise of 14.2% on the same period last year. In 2011 alone, 23 new wind turbine models were announced and the average size of the offshore turbine is indeed growing. The new models announced are mostly large machines with a rated capacity above 5MW. Taking into account the models announced over the last two years, only 28% are less than 5MW; the rest are bigger machines.

Between 2021 and 2030, the annual offshore market for wind turbines is estimated to grow steadily from 7.8GW in 2021 to 13.7GW in 2030. By 2030, total installed offshore capacity will reach 150GW, producing 562TW/h of electricity, equal to 13.9% of EU electricity consumption, depending on power demand trends. It is expected that 2027 will be the first year in which the market for offshore wind turbines (in MW) exceeds the onshore market in the EU, and annual investments in offshore wind power are expected to increase from €11.5bn in 2021 to €17bn in 2030.

Bigger turbines, further out at sea

As installed capacity increases, so too do technological developments. Offshore wind power is moving into deeper waters, which are further from the shore, and wind farm size is increasing. Currently, wind farms are up to 20km from the shore and in water depths of up to 20m.

And yet, a large number of wind farms that are consented and under construction are already located in water depths of up to 60m and up to 60km from the shore. Looking even further out to sea, floating concepts are being developed. These offer the possibility of bringing offshore wind to the deeper waters off the Iberian Atlantic seaboard and the Mediterranean.

European offshore wind nevertheless remains a young industry in need of a stable and clear regulatory framework to support its development.

The EU currently has a target for a 20% share of renewable energy in the overall energy supply by 2020. This has driven forward investment in renewables in recent years, but 2020 is a few short years away and greater policy certainty beyond that timeframe is now needed. The European Wind Energy Association is calling for a new renewable energy target for 2030 and the European Renewable Energy Council has recommended that the level be set at 45%. At a national level, governments need to create stable support schemes for both on and offshore wind power to allow investors the certainty they need to continue to build their wind power plans.

Furthermore, attracting finance will be key in the move to large-scale offshore wind development. Financing activity in the offshore wind energy sector did remain solid during the first half of 2012 despite the general challenges of the European banking sector. Although the number of financial institutions willing to finance offshore wind energy continues to grow, including commercial banks and public financing institutions such as the European Investment Bank and export credit agencies, it will be essential to attract other financing players such as pension funds or private equity to support large-scale offshore wind development.

Finally, R&D efforts in offshore wind energy need to be stepped up and supported by the EU, governments and the industry itself to bring down the costs of offshore wind power.