Engaging with CHP: how the SSS clutch increases flexibility

The SSS (Synchro-Self-Shifting) clutch, which automatically engages and disengages through shaft speed control only, is an ingenious device widely used in combined cycle plants, eg to disconnect the steam turbine in a single shaft configuration, allowing the gas turbine/ generator to be operated separately. The clutches are also proving valuable in combined heat and power applications, typically employed between steam turbine sections, greatly increasing operational flexibility. 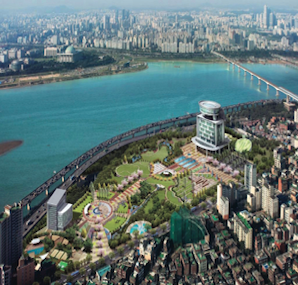 The SSS (Synchro-Self-Shifting) clutch, which automatically engages and disengages through shaft speed control only, is an ingenious device widely used in combined cycle plants, eg to disconnect the steam turbine in a single shaft configuration, allowing the gas turbine/generator to be operated separately. The clutches are also proving valuable in combined heat and power applications, typically employed between steam turbine sections, greatly increasing operational flexibility.

A recent CHP application is in Korea Midland Power’s remarkable new 2 x 400 MWe combined cycle power plant currently under construction below Seoul, in the Mapo district, to the west of the city. This has the distinction of being the world’s first underground utility-scale fossil fuelled power station, with LNG as primary fuel.

As well as generating electricity – capable of meeting about 10% of Seoul’s power demand – Seoul Combined Cycle Thermal Power Plants No. 1 and 2, will also supply heat (up to about 616 MW) to nearby offices, homes and public buildings.

Due to start up in 2017, the new CHP plant is being constructed by Posco with main equipment (gas and steam turbines plus heat recovery steam generators) supplied by MHI licensee Doosan.

The facility is located at (or rather under) the site of what was Korea’s first fossil fired power plant. Seoul Thermal Power Plant units 1, 2 and 3, built in the 1930s and 1950s, were all demolished by 1982 with only the 380 MW units 4 and 5 remaining in operation in part of the site. Once the new combined cycle CHP facility is in operation, units 4 and 5 will be shut down and the site remodelled to include a park, sports facilities, performance spaces, library and observation platform integrated with the power plant chimneys. The excavation to accommodate the new power plant is 25 m (average depth) x 194 m x 164 m, with special attention paid to installation of watertight barrier walls due to the proximity to the Han River.

The fuel cost for the Seoul CHP plant is put at about $10 per MMBtu, while the value of electricity generated is estimated to vary between around $150 and $450 per kWh.

In each unit the SSS clutch is located between the LP and HP/IP sections of the steam turbine (see system diagram, above). Why a SSS clutch in this case?

The LP turbine in the Seoul plant has a minimum steam flow of approximately 500 000 lb/h. During maximum heating load periods this steam is worth considerably more if sold for heating than the value of the electric power that could be generated with it via the LP section of the turbine.

It is estimated that on an annual basis use of the clutch provides an increased income of approximately $5 000 000.

An alternative to the clutch would be deploying a separate LP turbine with its own generator and switchgear, at an added equipment and construction cost of more than twenty times the cost of the clutch.

Another notable combined cycle CHP plant that makes good use of the added operational flexibility provided by the SSS clutch is TPP2 in Riga, Latvia, one of two 400 MW CC CHP units at the site.

Among operating requirements of the plant are that it generates almost the same amount of power in winter heating mode as it does in summer full condensing mode. And almost all of the low temperature heat lost in the condenser in the summer is recovered as high temperature condensing heat in the winter. This requires: