Domestic CHP may become a reality

Ceres Power has teamed up with British Gas in a project whose aim is to produce a fuel cell for the home based on its innovative metal supported SOFC. 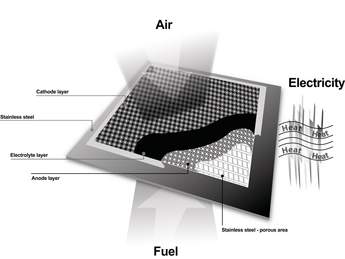 Ceres power has been developing a novel type of fuel cell which combines ceramic materials, based around doped cerium oxide, with stainless steel to produce a robust solid oxide fuel cell capable of operating at temperatures at or below 600 °C. Ceres has shown that its metal supported SOFCs can be incorporated into stacks and systems capable of delivering commercially meaningful levels of power density and efficiency. They are tolerant of carbon monoxide, and robust to thermal and redox cycling. Their durability over 3000 hours of operation and 500 thermal cycles has been demonstrated.

This SOFC is suitable for power delivery of between 1 and 25 kWe. Ceres target applications include domestic CHP, remote power supplies, and auxiliary and standby power units.

The next stage is commercial development of a saleable fuel cell based system. Small scale CHP is an attractive application for SOFCs because the use of its waste heat significantly increases overall efficiency while supplying high grade heat at a temperature compatible with the use of standard steels.

What makes these fuel cells unusual is the unique combination of a practical operating temperature (around 550°C) and affordable materials. The core elements, stainless steel components and thin ceramic coatings of galolinia doped ceria (CGO), are identical in terms of thermal expansion. They are extremely thin (in the order of the width of a hair) and constructed in such a way as to make them modular for total flexibility using standard sealing technology.

The suitability of CGO stems from its high ionic conductivity at 500°C when manufactured in a thick film of some 10–30 microns, a temperature low enough for stainless steel to be used for many of system components. The conductivity of the most commonly used SOFC electrolyte, yttria stabilised zirconia, does not attain the necessary level until its temperature reaches 700°C.

The largest UK energy supplier, British Gas, is to work on a commercial development programme with Ceres to provide domestic scale CHP units (output around 4 kWe) based on the Ceres fuel cell. It will be the world’s first mass-market device of this kind. According to Ceres estimates, when incorporated into a boiler fuel cells have the potential to dramatically reduce household energy bills and cut carbon dioxide emissions. British Gas has chosen to back the Ceres Power developed fuel cell as it can run on natural gas. This makes the technology immediately accessible to the 14.5million UK households with a gas central heating system. A cube of cells, each about the size of a CD case but wafer-thin, will form ‘the heart of a new generation of home boilers’.

Dominic Shorrocks, director of New Growth, Brtitish Gas Home Services, said: “Making green energy a reality is a core part of our strategy. Fuel cell-powered boilers will make far more effective use of hydrocarbons than a conventional boiler and will help our customers save money.”

Ceres recieved major recognition for its green credentials when it became the 2003 winner of the prestigious Carbon Trust Innovation Award. Earlier this year Ceres won the Institute of Materials, Minerals and Minings Gold Medal. Since its formation in 2001, Ceres Power has raised over £25 million of funding through two rounds of private equity and its AIM IPO in November 2004.

Structure of the Ceres fuel cell