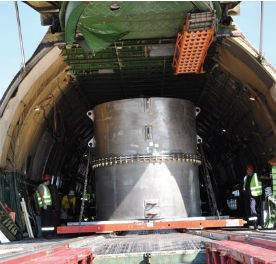 The main driver of the requirements for air shipments of radioactive materials was the necessity to ship plutonium either for military programmes or as MOX fuel in civil programmes. The early editions of the IAEA’s Regulations for the Safe Transport of Radioactive Materials (up until 1996) didn’t contain limitations related to accident conditions for package designs destined for the transport of radioactive materials by air. Since potential consequences of an air transport accident are far more severe than of a land or a sea transport, regulatory restrictions appeared a lot earlier. For example, in the United States, Public Law 94-79, enacted in August 1975 stated: "The Nuclear Regulatory Commission shall not license any shipments by air transport of plutonium in any form, whether exports, imports, or domestic shipments…[except as single doses of medicine]… This restriction shall be in force until the Nuclear Regulatory Commission has certified to the Joint Committee on Atomic Energy of the Congress that a safe container has been developed and tested which will not rupture under crash and blast-testing equivalent to the crash and explosion of a high-flying aircraft" [1]. Accordingly, in 1978 NRC issued the ‘Qualification Criteria to Certify a Package for Air Transport of Plutonium’ (NUREG-0360) containing accident test requirements for packages, as summarized below [2]:

As a result, a Plutonium Air Transportable Package, Model PAT-1, which met the NUREG-0360 requirements was developed by Sandia Laboratories. The PAT-1 package design was certified as capable of withstanding severe aircraft accidents in 1978. The package has been assessed for transport of up to 2.0 kg of PuO2 having a maximum decay heat of 25 Watts. The energy absorbing element was an outer assembly made of select kiln-dried redwood to take advantage of redwood’s high specific energy and fire-resistant characteristics [3].

IAEA-TECDOC-702 ‘The air transport of radioactive material in large quantities of with high activity’ was issued in April 1993. Subsequently, the 1996 edition of the IAEA’s Regulations for the Safe Transport of Radioactive Materials included stricter requirements applicable to packages intended for transport by air. In particular, new requirements regarding the limitation of radioactivity content in a Type B package for non-special-form materials to 3000 A2 (combined total activity concentration of radionuclides, measured in TBq), subcriticality of a single package after a series of extended tests, as well as the Type C package capable of withstanding severe aircraft accidents were introduced. The later 2005, 2009 and 2012 editions of the IAEA regulations confirmed the validity of those provisions [4].

The idea to develop a package for air shipments without restrictions on radioactive content activity (Type C package) developed after the completion of the first licensed shipment of spent fuel based on new regulations (not under special conditions) for the research reactor spent nuclear fuel air shipment in Type B TUK-19 casks in 2009 from Romania to Russia. These transports were in the framework of the US National Nuclear Security Administration (NNSA) Global Threat Reduction Initiative (GTRI) and the Russian Research Reactor Fuel Return (RRRFR) Program. Since then six additional RR SNF air shipments in TUK-19 casks have been performed, from Libya (1 shipment), Uzbekistan (2 shipments) and Romania (3 more shipments) to Russia. The maximum number of spent fuel assemblies in a TUK-19 cask is four.

In 2009 the work on the Type C package development on the basis of SKODA VPVR/M cask for air shipment of RR SNF was started under the RRRFR program by the U.S. Department of Energy. The work aimed to enhance safety of air shipments of radioactive material. Current requirements of Russian and international regulations for Type C packages do not impose any additional limits on activity of radioactive content but require maintaining the package tightness after testing on impact with a speed not less than 90 m/s and fire for one hour.

The EAC is a titanium cylinder made of similar upper and lower halves and consisting of a welded body filled with energy-absorbing elements — more than 2000 hollow spheres made of titanium alloy surrounded by sealing foam. The SKODA VPVR/M cask is placed into the inner cavity of the EAC. The main characteristics are presented in Table 1.

The EAC fulfils the function of dynamic protection in case of an air accident. It was developed to absorb the force of impact against a rigid target at the velocity of not less than 90 m/s up to the load levels that the SKODA VPVR/M cask body can endure in emergency situations during a land shipment. Two EAC were fabricated on the order of US DOE by VSMPO-AVISMA Corp. (Verkhnaya Salda, Russia). A rocket-sled impact test was carried out on a 1:2.5 scale mock-up in May 2011 at RFNC-VNIIEF (Sarov, Russia): see Figure 2.

Axial, side and corner (42°) drops of the TUK-145/C with a speed of 90 m/s onto soils were analysed and the results were compared with those from the impact on an unyielding target (Figure 4). At the end of the drop simulation, the TUK-145/C had penetrated the soils to a depth of 1.2 m, 0.9 m and 1.7 m respectively. The maximum levels of the total deformations in the EAC materials do not exceed the design limit for cask rupture. The joints situated in the immediate proximity of the impact zone were analysed in more detail. The bolts deform elastically. The maximum force localized on the joining bolts is significantly less than the bolt material flow limit (see also Figure 3).

The international licensing of any packaging for radioactive materials transport is based on the initial certificate of approval for package design issued by the competent organization in the country of origin of the respective packaging. The first Russian certificate of approval RUS/3166/CF-96 for TUK-145/C package design was issued by the State Corporation for Atomic Energy, Rosatom in 2012. Several Russian types of RR spent fuel assemblies (SFA) (IRT-2M, IRT-3M, IRT-4M, VVR-M, VVR-M2, VVR-M5, VVR-M7, VVR-(S)M, S-36, EK-10, TVR-S) are included in this certificate, but other radioactive material can be also shipped by air in TUK-145/C provided that additional safety analyses are performed.

The air shipment organization of TUK-145/C by An-124-100 or IL-76 aircraft is flexible and it depends on the available transport and loading infrastructure at the consignor’s facility, and therefore the certificate of approval for its shipment can also vary. There are two shipment options available for the An-124-100 aircraft and one prospective option for IL-76 aircraft.

Option 1: Load-off, load-on
A good road transport infrastructure between the consignor’s facility and the expedition airport is required for the safe shipment of the TUK-145/C loaded with the SKODA VPVR/M cask containing SFAs. The weight of the loaded TUK-145/C is 29.65 t, to which the truck and trailer’s weight is added.

In this case the SKODA VPVR/M cask containing the SFAs is loaded in the EAC forming the TUK-145/C at the consignor’s site and then is transported by road to the expedition airport using a specially-designed truck and trailer. The truck front-loads the TUK-145/C on the special trailer into the An-124-100 aircraft (Figure 5). Mass of one package with truck: 47t. Capacity: up to two TUK-145/C. Total cargo weight: 94t.

It should be noted that a single certificate of approval for combined road and air shipment of TUK- 145/C is required in this case. For this option certificate RUS/3166/CF-96T (Rev.1) for TUK-145/C shipment was issued by Rosatom in 2013 and was validated by the Hungarian Atomic Energy Agency for two 2013 shipments.

Option 2: Airport assembly
This option can be safely applied for an undeveloped road transport infrastructure between the consignor’s facility and the expedition airport. In this case the SFAs containing SKODA VPVR/M (as a certified Type B cask) is transported in a specialized 20 ft ISO container by road to the expedition airport using an appropriate standard semi-trailer and truck. The weight of a SNF-loaded SKODA VPVR/M cask with mounted shock absorbers is less than 13 t, and together with the ISO container weighs up to 20 t. At the airport the previously-delivered EAC is then loaded with the SKODA VPVR/M cask forming the Type C TUK-145/C, and afterwards the package is front-loaded in the An-124-100 aircraft using a special rolling system. Mass of one package with base plate: 32.2t. Capacity: up to three TUK-145/C. Total cargo weight: 104t (including base plate).

The first RR SNF air shipment in Type C package from Vietnam to Russia was completed in July 2013. Spent fuel export took four days: on 30 June equipment and tools set off by road for the airport, the next day the loaded SKODA cask left for the airport. That same day the aircraft landed with the TUK-145/C container halves. The entire package was assembled at the airport, winched into the aircraft, tied down, and the aircraft took off on 3 July.

Option 3: Horizontal (proposed)
The TUK-145/C package can also be shipped in a smaller IL-76 aircraft in a horizontal position using a special handling frame. Mass of one package with frame: 32t. Capacity: one TUK-145/C. Total cargo weight: 38t (with roller system).

Development of the reference manual

TUK-145/C can be used for future shipments of:

Air shipment may help reach places with difficult access or improve shipment schedules in big programmes. With a limited fleet of transport packages, air transport assures better security in the cases of long routes, and avoids dangerous goods transiting in the close proximity of communities or environmentally-protected zones.

The set of equipment devised includes:

The flexible TUK-145/C technology and its international licensing reference manual can comply with the requirements for any future utilization in RR SNF shipments. In the case of air shipments and other long-haul radioactive material shipments involving transit of several countries, a better international harmonization of the application requirements for certificates of approval for package design and shipment and their review by regulatory bodies is greatly needed in order to improve the efficiency of the radioactive materials transports regulatory process worldwide. This could be achieved by the development and adoption of new IAEA guidance documents for applicants and regulators concerning package design and shipment application documentation and review. Such a guidance document could be based on the European Union Package Design Safety Report (PDSR) model, which has successfully started the path of harmonization for EU countries.

This article is based on papers ‘Perspectives for TUK-145/C Cask: International Licensing and Further Utilization’ and ‘Description of Type C TUK-145/C Package Design: Certification in Russia’ at the 17th International Symposium on the Packaging and Transportation of Radioactive Materials PATRAM 2013 August 18-23, 2013, San Francisco, CA, USA