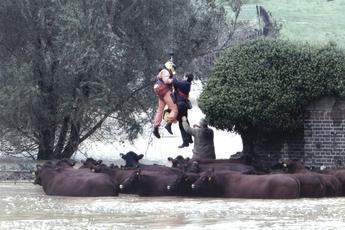 OUR forbears had to decide whether the advantages of living near a river or low-lying coastal area conferred sufficiently high benefits to offset the damage that would be caused by periodic flooding. Their decision is pretty obvious given the importance of waterways for navigation and commerce, but we’ve followed their lead with expectations only of the benefits whilst at the same time creating conditions over the centuries that were certain to make things worse such as deforestation, interference with natural fluvial processes and inappropriate agricultural practices. Repairing this damage to some extent should yield benefits in some areas, but it can only be a long-term strategy the effects of which we won’t see for decades, and so reactive methodologies continue to demand economic resources. The seriousness of the situation is summed up by the findings of the latest Government-sponsored report which suggests that worst case annual economic damages from flooding could rise from UK£1B (US$1.85B) to UK£20bn (US$37B) by the 2080’s/90’s – assuming no change in current flood management policy.

The implications for economic damages caused by flooding are well illustrated by the situation in England, where only 8% of land is urbanised but 90% of people live in these areas. Almost two million homes and businesses are in natural river and coastal floodplains in England and Wales alone, with assets at risk worth billions of pounds. It is this sheer value of assets that has influenced attitudes to flooding over the decades and resulted in defensive strategies, but there is now a realisation that we can’t continue in this vein forever.

It is however widely expected that the frequency and severity of flood events will worsen in coming years, extending further the levels of distress and damage to communities and businesses across the country. Unfortunately the magnitude of the problem stems from more than one source, and rising sea levels for instance will create increasing problems to coastal communities, particularly when
combined with high tides and river flows.

Estimates suggest that approximately 7% of the country is likely to flood from rivers at least once in every 100 years, and 1.5% of the country is at risk from sea flooding. Uncertainty is a continuing problem for those involved in the field of flood management, both in terms of how future climate patterns will affect weather, and a currently relatively low level of predictive confidence.

Climate change
Most of those involved in research into flooding suggest that global climate change is the major driver in this worsening of our weather, but no-one can accurately predict at present just how severe the future scenarios will be on this assumption. To attempt analysis and extrapolation purely on this basis is also to ignore the possibility that there just might be natural factors at work that are both more
profound and difficult to assess. It could be a combination of natural and anthropogenic factors which would be more difficult still. What is certain however is that without a proactive and planned approach to flood risk management, the potential for significantly greater damage from flood events in the future looms large.
The whole way in which we approach flooding is changing however, with both the EU and our Government pushing the case for sustainability, encouraging the notion that living with flooding is a more appropriate strategy than applying increasingly less
effective containment or conveyance methodologies. Legislation such as the EU’s Water Framework Directive positively discriminate in this direction and will make it more difficult to obtain permissions for some hard engineered defences in future years. The Directive has to acknowledge though that existing high-value assets can’t just be abandoned to a flood, so flooding becomes a ‘special case’ – in other words carry on as before in these areas. On the other side of the coin the Directive expects that the cost of water will be spread across a wider range of stakeholders, and for many small or isolated communities in flood plains that can’t demonstrate an economic case for grant-aided flood defences, self-help will form an increasingly important aspect of flood management, especially since the bulk of property at high risk lies in just five or so main areas, and it is in these areas that the majority of capital projects will happen.

Flood walls do engender public confidence by the very nature of their being a visually obvious defence, but they come at a high cost, both in terms of initial capital expense and future maintenance requirements. To design yet more permanent defence schemes is to accept that we are merely delaying the point at which we know that natural forces will overcome our attempts to contain them, and indeed many of our defences are at or near to the end of their design life. As climate change worsens, then more will be expected of existing defences, further shortening their effective design life. There is however little option for high-value assets at risk other than flood defences in the short to medium term, so we can expect yet more investment in upgrading of existing defences and construction of new ones.

The decisions that we take now will however have a major impact on the lives of future generations, and must therefore be based where possible on realistic and sustainable strategies. It should be remembered that flood defence schemes will not completely remove the possibility of flooding, but simply reduce the risk. The alternative strategies centred on living with flooding (managed retreat, flood plain restoration, realignment etc) are gaining increased momentum, and indeed are likely to form the cornerstone of Government policy direction in coming years. How this methodology will be applied to many areas that are both at risk and having high value assets however remains to be seen, but we can be sure that flood defence will remain central to the issue.

The author is technical manager with Bauer Inner City Ltd