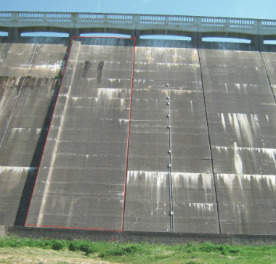 The Island of Jersey is situated in the English Channel, 161km south of the English coast. Jersey Water produces the Island’s potable drinking water, supplying over 90% of the Island’s population of 100,000 and operates six major reservoirs.

Val De La Mare reservoir has a mass concrete dam situated on the west side of Jersey which was constructed between 1957 and 1962. The storage volume of the reservoir is 938.7Ml with a catchment area of 350 hectares. Val de la Mare – when full – accounts for 35% of Jersey Water’s available raw water storage. Crest length is 192.9m, maximum dam height is 29m above general foundation level and maximum water depth is 24.31m. The dam was constructed in 27 monoliths, each 6.7m wide formed in 1.2m lifts. The dam is owned and operated by Jersey Water.

Monitoring at the AAR suceptible dam

Historically Val de la Mare dam has been widely known to suffer both from Alkali Aggregate Reaction (AAR) and water seepage through existing construction joints. The first sign of problems became apparent in January 1971 when, on inspection, the dam exhibited differential displacement of some of the blocks and damp patches were visible on the downstream face of affected blocks. Following a period of research and investigation the conclusion suggests that the AAR reaction had occurred principally due to the combination of chalcedony vein material in local coarse aggregates and high alkali content of the imported cement. It has also been identified in Inspecting Engineer reports that water seepage may affect the stability of the dam during extreme seismic events.

In 2010, the Inspecting Engineer’s report recommended that a geo-membrane lining be installed on the dam’s upstream face, primarily to prevent further water ingress to the concrete structure and also to reduce leakage through the block lift joints which could cause uplift. During the summer of 2011, the reservoir was completely drained to carry out the geo-membrane lining works to the upstream face. Works were completed successfully by Carpi Tech of Switzerland who have a patented system and lined over 100 dams worldwide. The work carried out by Carpi has now improved the probability of failure due to seismic events up to a return period of 1 in 20,000 years.

Due to their positioning, 3m below the crest walkway, accurate and frequent reading of the needle gauges is challenging and was subjective, depending on the consistency of the reader. Due to the nature of the small movements in the dam blocks it was determined by Jersey Water and the Inspecting Engineer that a more sophisticated system was required.

Jersey Water’s Inspecting Engineer, Ian Carter of MWH, suggested that possibilities might exist to use fibre optic technology to accurately measure vertical movement in the dam structure. Since the completion of the geo-membrane installation, drainage through the vertical drain holes running between the dam crest and the gallery had effectively ceased. It was suggested that using selected drain holes as host conduits for fibre optic monitoring could provide a straight-forward solution as replacement for needle gauges and also provide indication of any residual movement of blocks as a result of AAR.

During the summer of 2012, Jersey Water and the Inspecting Engineer made a visit to the Albigna Dam in Switzerland to make a judgement on the effectiveness of fibre optic sensors as a monitoring solution. Albigna Dam had a single fibre optic sensor fixed across a fault in the rock, giving real-time deformations to the operator. A period of consultation started with Smartec SA, based in Switzerland and part of the Roctest Group. In the summer of 2013, Jersey Water placed an order for six 10m long Smartec SOFO Standard Deformation Fibre Optic sensors complete with SOFO VII/MuST Universal Reading Unit. The SOFO deformation sensors are transducers that transform a distance variation into a change in the path unbalance between two optical fibres that can be measured with the SOFO reading unit. Figure 1 shows the structure of the sensors

The sensor is composed of two main parts, active and passive. The active part contains the reference and the measurement fibres and measures the deformation between its two ends. The passive part of the sensor is insensitive to deformations and is used to connect the sensor to the reading unit.

The primary benefits of using SOFO sensor include:

During October 2013, Smartec engineers came to Jersey to install and commission the SOFO sensors. The sensors have been installed in pairs in three of the existing vertical drain holes. The location of the drain holes is shown in red on Figure 2.

During the planning phase of the project Jersey Water had all vertical drain holes jet-washed and camera surveyed to confirm suitable routes for the fibre optic sensors. Some of the drain holes had heavy calcite build-up which would have prevented successful installation. The camera survey identified 12 drain holes where there was sufficient clear space to insert the fibre optics. In discussion with our Inspecting Engineer at MWH, we chose to utilise drain holes that allowed us to gain the most meaningful data.

The dam gallery runs between Blocks 10 and 19 inclusive, although blocks 10 and 19 do not contain any vertical drain holes. Drain holes in blocks 12, 13 & 14 were not suitable for use as they form the primary spillway and it was agreed that thermal effects of spilling water might not allow fair comparison of data between the blocks.

Prior to the Smartec installation visit, scaffolding was erected at crest level at dam Blocks 11, 15 & 18 to allow access to the drain holes. To enable fixing of the upper tension brackets a wedge of concrete was removed from each of the three locations to provide a flat, level surface. Working in conjunction with Smartec, Jersey Water designed its own custom brackets that needed to fit into existing apparatus and provide a degree of movement for adjusting tension in the fibre optic sensors.

"It took three days to successfully install the sensors with a day spent commissioning."

Smartec provided two installation engineers for four days in October to install and commission the sensors. It took three days to successfully install the sensors with a day spent commissioning. Some problems were encountered when threading the sensors up the 80mm diameter drain holes, this was mainly due to calcite build-up catching on the apparatus. Those issues were overcome and the sensors were correctly installed and pre-tensioned. There was also an issue with the length of one of the sensors connecting cables that was not sufficient to reach the measurement unit, but this was also resolved by carrying out a fibre optic splice on site. The sensors are 10m in length and two sensors were joined mechanically together, effectively creating one 20m sensor, and the results are obtained by adding the readings of the 2 sensors together to provide a total deformation to a resolution of 0.01mm.

Once the sensors were installed to the drain holes, fixed and tensioned, the commissioning and training phase was able to start. The output from the Smartec reading unit has been successfully linked to the Jersey Water SCADA system to provide a visual output showing historic trends. Figure 5 shows a SCADA output for Block 11.

Since commissioning at the end of October, a trend in the sensor pairs has been showing a decrease in length of approximately 1.6mm over the length of the 20m sensors. Readings have been taken at four hour intervals each day. The decrease witnessed so far can be attributed to colder weather induced contraction of the dam structure, as over the four weeks since installation was completed, temperatures have dropped locally by some 12°C.

It is too early however, to draw any firm conclusions about the performance of the dam and such is the resolution of the data from the sensors that seasonal variations are likely to be seen. Any seasonal variations must be filtered out during the long-term to observe any underlying fundamental growth or shrinkage within the dam blocks. Jersey Water will be running existing monitoring systems alongside the new fibre optic sensors until sufficient data has been recorded and analysed to allow judgement on dam performance and behaviour to be made.

Smartec’s system is easily expandable, with up to 20 sensor inputs possible with the SOFO reading unit. Scope for expansion of the fibre optic monitoring in the future has already been discussed, possibly by introduction of Smartec manufactured fibre optic piezometers.

Jersey Water and Smartec SA have partnered successfully to design, install and commission six SOFO standard deformation fibre optic sensors, inside three existing 80mm drain holes within the AAR prone mass concrete dam at Val de la Mare. The fibre optic monitoring system has many advantages over existing monitoring techniques and should have a substantial lifespan. Following the geo-membrane lining of the upstream face of Val de la Mare in 2011, Jersey Water is looking to building a bank of data which should help our understanding of AAR affected structures. This in turn will improve the performance of the dam, prolong its operational life and with use of new technology, bring monitoring systems forward into the 21st century.