A project to support life-extension plans at Hinkley Point B and Hunterston B AGRs. 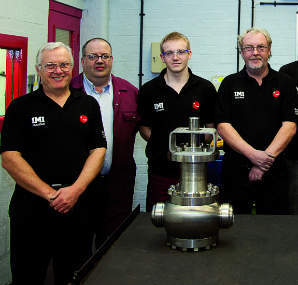 To support the life-extension plans at Hinkley Point B and Hunterston B, EDF Energy is planning to invest in three key areas: improved inspection capability of graphite and boilers, additional post-Fukushima emergency management response equipment (both onsite, such as improved flood defences, and offsite, such as a fleet of Land Rover Defenders (Jeep-type all terrain vehicles)), and additional safety systems.

Both safety system upgrades are intended to help stop the fission reaction in an emergency. The primary shutdown mechanism and control for the nuclear reaction are the control rods, which shut down the reactor when lowered completely into the core. One safety system improvement is the introduction of super-articulated control rods, which have an improved capability to enter the reactor, in case seismic acceleration has damaged the graphite channel that the rods are inserted into. One such rod was used in a trial at Hinkley Point B in August-November 2011, and further testing and validation has been carried out since.

The second upgrade improves the ability of a backup safety system. For certain maintenance activities, CO2 gas is pumped out of the reactor, through a gas blowdown route to a filter (to remove contamination) and into the atmosphere. To bring the reactor back to power, CO2 is pumped back into the reactor using gas injection lines. These injection lines are dual-purpose, in that they can also inject nitrogen, which is a neutron inhibitor, into the reactor core. Nitrogen core purging is used as a secondary shutdown facility in case the control rods do not successfully enter the reactor core.

EDF Energy has added additional nitrogen injection points for diverse reactor holddown. The new equipment also has a secondary function of introducing an additional reactor gas blowdown function. So EDF specified full-bore ball valves for the injection lines, and had stringent requirements for reliability and zero leakage even at high temperatures and pressures. Also, the valves had to conform with ASME III Class 1 requirements.

The winner of the contract, UK manufacturer Truflo, developed a customized design with a top-entry concept for easy in-line maintenance (see picture). Its design included special high-temperature polymeric and graphite seats and seals for good sealing at high temperature and pressure. The company designed, manufactured and validated the first new valve (including seismic testing) only 19 weeks after order.

Upgrades at both power plants have been carried out over the last few years and final nitrogen plant commissioning is scheduled for later in 2013.