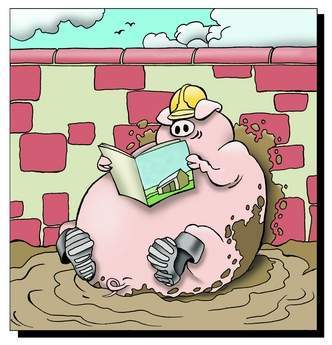 Animal Farm, a now-classic novel by the political satirist, George Orwell (1903-50), contained this much-quoted comment on an aspect of democracy: ‘All animals are equal but some are more equal than others’. The animals in Orwell’s allegorical story were all of the domesticated sort, but of course the criticism implied was of the human species. Orwell’s statement, which in strict logic is nonsense, did not so much invite questions as do a wonderful job of demolition.

Clever satire can accomplish that, but not all teasing nonsense is clever satire. Take certain advertisements put out by one of our industry’s most admired corporations – General Electric of the USA. Their text invites the reader to “imagine a cleaner way to produce electricity” and goes on to say that the reason “why GE is one of the world’s leading suppliers of wind turbines” is that wind energy “is one of the world’s cleanest, most renewable power sources”.

Think how many questions, some of them possibly whimsical, are invited by the notion that one energy source can be more renewable (how, by what and/or whom?) than another.

I thought that we had all become so inured to such admittedly rather silly terms as ‘renewable energy source’ that we had tacitly accepted them as merely conventional labels, giving observers no further scope for satire. I guess I was wrong.

Can people like President George W Bush of the USA and Dr Andrei Malyshev of the Russian Federation’s Atomic energy ministry be altogether blamed for their reading of the terminology? Both considered nuclear power to be renewably sourced (see MPS, April 2006, p47 and May 2003, p43, respectively). As likewise, more recently, did Lord Sainsbury, the UK science minister. He, according to the UK newsletter, Nuclear Issues,* told the upper of the two UK Houses of Parliament that he accepted nuclear energy as a renewable source. He was answering two debaters. One had put nuclear power forward as renewably sourced on the ground that its generation was not accompanied by CO2 emissions. The other had argued that reprocessing spent nuclear fuel (to recover ‘unburnt’ uranium) added another ‘renewable’ attribute to nuclear energy.

Nuclear Issues comments: ‘officially recognising and classifying nuclear power as a renewable energy would have a considerable advantage when it came to the public debate’. I guess General Electric of the USA might have to launch a new advertising campaign if the public debate found nuclear to be even more renewable than wind!

So many heads are now being poked over parapets to make not unfavourable noises about nuclear power that I am emboldened to join the chorus. Indeed, I am emboldened enough to mention what has in former times been called a ‘plutonium economy’, in which fast breeder reactors† greatly multiply the fissile resources at humankind’s disposal.

The fast breeder reactor’s development for electrical power generation in a plutonium economy has been halted in some countries. Partly this has been because of technical difficulties and partly because plutonium has become a pariah to many people. It is reviled by them for its rôle as a nuclear weapon material that might ease the proliferation of nuclear weapons. And detractors point fearfully to its malign attributes.

Yet plutonium has been promoted by braver spirits as a potential boon in a world ever more disenchanted with fossil fuels and still not sure that other energy sources, known or envisaged, will suffice for civilised humankind. To plutonium’s admirers – and they do exist – the element is affectionately known as ‘plute’. You will find a beguiling cameo of it in our sister journal, Nuclear Engineering International, for July 2005. On pp 42-43 David Fishlock condenses history, science and technology in a character sketch quite unlike anything you will find in what he describes as “the mythology created by nuclear energy’s opponents”.

While cogitating about plutonium you may care to think about a not unrelated question.

Is it possible that George W Bush, apostle of democracy and president of the USA, has sought nuclear rapprochement with Manmohan Singh,†† prime minister of the world’s largest democratic state, India, at least to some extent because of that country’s progress in its dogged development of the fast breeder reactor?