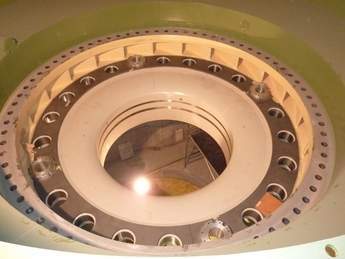 Often referred to as the ‘invisible plant’, the Limberg II pumped storage project is being built in the southern part of the Austrian province of Salzburg, north of the Glockner Group in the Kaprun Valley, near the junction of the three regions of Salzburg, East Tyrol and Carinthia. The project is being developed as an extension to the Kaprun project by Verbund subsidiary, Austrian Hydro Power (AHP), and is being built entirely underground.

Upon completion, the peak-load pumped storage project will increase capacity at Kaprun from 353MW to 833MW. It will operate on the existing Mooserboden and Wasserfallboden reservoirs in the lower Kaprun valley.

The Limberg II project represents an investment of EUR 365M for AHP. It is therefore critical to the company that they optimise the life expectancy of the equipment, and also reduce the frequency of maintenance operations and cost. In order to help achieve this, AHP specified the use of a special coating material to line the spiral cases around the two turbines, using an average coating thickness of 1.5mm, known as Irathane 155 and manufactured by ITW Irathane Futura.

Irathane 155 is a two component, elastomeric polyurethane coating with exceptional abrasion resistance – first developed for the mining industry in North America. Irathane 155 is available in two versions, one for spray application, the other a brushable version. The latter was used to coat the most intricate parts of the spiral cases. Irathane 155 can be applied on various types of hydro-mechanical equipment and on some turbines – both in the workshop or on site. And the cured coating is considerably tougher and longer-lasting than the surface material that it protects. Due to severe operating conditions (around 70 bar pressure), Irathane 155 has to be bonded well to the steel surfaces and the process must be undertaken with skill by the contractor. In the case of this project, the coating work was undertaken by Bauschutz GmbH based in Welz, whose project manager Anton Paslar has 20 years experience of using Irathane 155 in penstocks and turbines.

Bauschutz is a leading industrial coating contractor in Austria, with particular expertise in the hydropower generating industry. Paslar says he has worked all his life in ‘holes’ and has managed a large quantity of projects using Irathane 155. Whereas this coating can be applied on an entire penstock if required, for cost reasons Bauschutz chose to use it solely where they believed it would be of premium value at Limberg II, that is to coat the most critical parts.

Over the years, Austria has proved to be a major market for Irathane 155 because the coating is designed to give excellent protection against cavitation and erosion, both of which are commonly encountered in this industry. Water from glaciers may not be the most aggressive, but after twenty years of using Irathane 155, companies like Voith Hydro continue to work closely with Irathane Futura to provide long term, problem free coating solutions.