Sedimentation has resulted in a 66% loss of reservoir capacity in China. Here Kara DiFrancesco looks at the sediment impacts of the country’s proposed lower Jinsha Jiang dams, and discusses the potential management options to prolong the lifespan and improve the economic and environmental performance of the structures 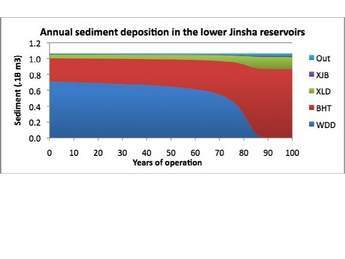 The sediment rich waters of China’s rivers present considerable challenges to maintaining the performance of the country’s ~26,000 large dams and the ecological integrity of riverine habitat below those dams. Annual reservoir storage loss in China more than doubles the global average of 1% per year, resulting in a cumulative loss of 66% of China’s initial reservoir capacity. [1, 2] Sedimentation will continue to plague the newly constructed and planned dams in China’s major river basins – the Yangtze (Chang Jiang), Yellow (Huang He), and Lanchang. This article illustrates these challenges through a study of sediment impacts of, and potential management options for, the partially constructed four-dam cascade on the mainstem of the Upper Yangtze, known as the Jinsha Jiang.

Sediment concerns in the Yangtze basin

Traversing China from the Tibetan plateau in the west to the Yellow Sea in the east, the Yangtze River is one of the world’s largest rivers in terms of both water discharge and sediment discharge [3]. The steep and highly erodible upper and northern portions of the basin supply most of this sediment. In addition to spatial variation in sediment throughout the basin, the monsoonal precipitation patterns result in highly variable seasonal sediment yields. Most of sediment transported by the Yangtze (80-90%) occurs during the wet season between May and October [2] (see Figure 1).

The high sediment yields pose threats to the performance of the two existing dams on the Yangtze mainstem (Gezhouba and Three Gorges Dam) and potential challenges to the tens of mainstem dams planned or under construction upstream of Three Gorges. Every year since 2003, approximately 100–150Mt of sediment has been trapped in the Three Gorges reservoir, instigating concerns regarding storage loss and alteration of the downstream sediment regime all the way to Shanghai, situated on the Yangtze delta. [4, 5]

The reduction in sediment supplied to reaches downstream of dams, as well as alteration of flow regimes, can also jeopardise the downstream ecology. The four-dam cascade partially under construction in the high sediment yield portion of the Jinsha Jiang above Three Gorges dam poses particular concern for the Upper Yangtze Rare and Endemic Fish Nature Reserve, an approximately 400km long reach wedged between the upper limit of Three Gorges Reservoir and the lowermost dam in the cascade. The Nature Reserve serves as one of the last remaining refuges for ecologically and economically important species and is a conservation target for The Nature Conservancy [6]. Sustainable operations of the lower Jinsha dams require addressing the dual challenges of maintaining some semblance of both the hydrologic regime and sediment regime below the dams.

Two of the four dams China Three Gorges Corporation plans to build on the Jinsha Jiang are already under construction (Xiluodu, XLD, and Xiangjiaba, XJB), while the most upstream dams are still in planning phases (Wudongde, WDD, and Baihetan, BHT). When completed, the four-dam cascade will provide 43km3 of water storage capacity, with an installed hydropower capacity of 38,500 MW, about double that of the Three Gorges Dam (see Table 1 for dam specifications).

where C is the adjustable (active) reservoir storage capacity and I is the average annual inflow.

As shown in Figure 2, upon completion of the cascade the majority of sediment is trapped in the most upstream dam, Wudongde, with less than 4% of sediment in Xiangjiaba’s drainage basin passed downstream. As the adjustable capacity of the dams is reduced due to sedimentation, trapping efficiency is also reduced, resulting in a larger volume of sediment passed downstream from each dam. However, sediment is primarily just shifted from one reservoir to another, and there is little change in the amount of sediment that exits the cascade (‘Out’ shown in light blue in Figure 2).

The cumulative impact of sediment accumulation in the reservoirs is displayed in Figure 3. While the most upstream dam, Wudongde, experiences the greatest sedimentation impacts, these impacts will affect the performance of the entire cascade due to the coordinated operation scheme for the dams. After approximately 42 years, Wudongde reservoir realises its half-life, defined as the time until sedimentation decreases reservoir capacity to half its total original volume and used as an approximation of when sedimentation problems become serious. [8] Considering the simplified nature of this analysis and the geometry of the reservoirs, these numbers should only be taken as rough estimates.

In addition to the impacts of sedimentation on reservoir capacity, the decrease in downstream sediment yield will likely produce morphological impacts to the downstream channel as well as impact the ecosystem. Based on the aforementioned analysis, operation of the Jinsha cascade would result in an 87% reduction in sediment yield at Pingshan gauging station from 167.9Mt/yr to 21.3Mt/yr.

When dams sever downstream reaches from their sediment sources, the flow below the dam may become sediment ‘hungry’ and prone to scour the streambed causing it to coarsen, degrade and become armoured. As the channel degrades, bank height raises, which in turn can increase bank erosion rates. [9] Further study is needed to assess the extent of potential for downstream channel degradation and coarsening of materials due to bedload transport downstream of the dams along with associated impacts to fish habitat.

The Yangtze River provides habitat for 338 fish species, 162 of which are endemic to China. The Upper Yangtze, in particular, serves as an important breeding, spawning and wintering sites for these endemic species. In addition to channel morphological impacts, the reduction in sediment may result in deleterious impacts to the downstream ecology and the endemic fish species dependent on the Yangtze’s turbid flood waters and the habitat created through bed load transport. [10, 11] The blockage of bedload behind the current and proposed dams, threatens to result in highly simplified habitats downstream of the dams, further degrading conditions for native fish species. The nutrient rich suspended load provides an important input to primary production, which forms the base of riverine and floodplain ecosystems.

The gravel beds of the lower Jinsha and its tributaries contribute very little suspended sediment, and this is unlikely to change with the dams in place. Cutting off this supply to downstream areas can limit food supply for fish species, while trapping nutrients along with pollutants behind dams creates ideal conditions for eutrophication and toxic algal blooms, such as those that plagued the Three Gorges reservoir soon after impoundment. [1, 2]

The turbid water currently provides endemic species accustomed to these conditions a competitive advantage over sight-feeding non-native species. [13] The severe reduction in turbidity levels on the Colorado River after impoundment of Glen Canyon dam allowed invasive fish species to thrive in the clear water, and the potential exists for similar impacts from dam building on the Yangtze. [14]

Each of these varies in their effectiveness in reducing loss to storage capacity and their economic cost and environmental impacts, all of which are also dependent on the hydrology and morphology of the reservoir.

Taking into consideration the objective of China Three Gorges Corporation to maximise hydropower production and the environmental concerns for maintaining the ecological health of the downstream fish reserve, utilising turbidity currents to passing sediment through the Jinsha dams appears to be the most viable sediment management option. When sediment concentrated turbid flows enter a reservoir they may travel in a current below the lower density clear waters. Sediment carried by turbidity currents are generally transported much further than sediments in normal suspension, and can travel all the way to the dam if the flow contains an adequate concentration of fine-grained sediment, which can remain in suspension by the current velocity. [8, 15] Under these conditions it is possible to efficiently sluice the sediment concentrated current through bottom outlets without water-level drawdown, a technique utilised at Xiaolangdi reservoir. [15]

Recent studies have successfully developed optimised dam operation plans to strategically schedule the timing and duration of sediment management activities in order to minimize tradeoffs to hydropower and water supply. [16,17] It is recommended that a similar study is undertaken to assess the potential to integrate a sediment management plan into proposed operations with minimal impact to the stated objectives of the dams. In the absence of such a study, some general recommendations follow, but these all need to be assessed in a more thorough quantitative manner.

Releasing turbidity currents by strategically opening the bottom sluice gates to pass highly concentrated flows through the reservoir presents the best possibility to release sediment downstream with minimal effect to operations and in line with the downstream environmental objectives. However, as mentioned previously, effectively sluicing turbidity currents is challenging due to requisite flow velocity and sediment concentration to ensure that sediments remain in suspension throughout the reservoir, which can be difficult to predict.

A potential strategy to address these issues is to use the most upstream reservoir to create optimal conditions for inducing turbidity currents in the downstream dams. As a hypothetical example, prior to flood season Wudongde reservoir could be drawn down in order to flush out sediment accumulated in the previous year(s) with the first flood flows of the season. As this sediment concentrated flow enters the downstream reservoirs, bottom outlets could be opened to allow turbidity currents to pass downstream.

If the flood itself does not yield sufficient flow to maintain turbidity currents, additional flows could be released from Wudongde to ensure that the sediment remains in suspension throughout the cascade. During this time, the downstream reservoirs could still be maintained above their flood control levels, resulting in minimal impacts to hydropower production. The viability of such a plan requires additional quantitative analysis, but may provide means to address the dual objectives of maximising hydropower production while maintaining the ecological integrity of the downstream fish reserve by operating the dams in a manner that mimics the natural sediment and flow regimes.