On 23 February a symbolic foundation stone was laid to mark the official start of construction of a new electricity interconnector between Britain and France. Staff report 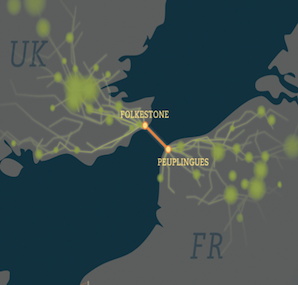 The symbolic ‘ground breaking’ ceremony on 23 February, attended by UK energy minister Jessie Norman and Groupe Eurotunnel CEO Jacques Gounon, marked the start of the final phase of the ElecLink project, which will create an interconnector able to carry 1000 MW in either direction through the Channel Tunnel between the national grids of Britain and France, and thereby increase by 50% the capacity for trading electricity between the two countries. More generally the energy exchanges it will foster will provide increased reliability and security to consumers throughout Europe, which is why ElecLink is one of the European Commission’s projects of common interest, a policy initiative designed to help create, ultimately, an integrated Europe-wide energy market.

Siemens and Prysmian were awarded the contract to supply the converters and the cable respectively for this new link between the French and British power grids. The customer is ElecLink, a subsidiary of Groupe Eurotunnel SE, which is investing €580 million in the project. This makes it a privately owned merchant enterprise, based on what Groupe Eurotunnel believes to be a proven economic model.

The cable is to be installed by Balfour Beatty in consortium with Prysmian, the order value being estimated at €219 million. It is unique for an interconnector of this size to be routed as a DC cable through an existing tunnel route. It will be installed flush against the wall of the north tunnel, one of the two shafts carrying the regular rail traffic.

Siemens will supply the converter stations at each end of the power line under a contract valued at around €315 million. The link is scheduled to take up commercial operation early 2020.

The contract covers a 1000 MW converter system for a DC voltage of ±320 kV. The two converter stations, one at Peuplingues in France, the other in Folkestone in the UK, will be linked by a 51 km long DC power cable. The scope of supply includes the overall system design and the supply, installation and commissioning of all substation components. The HVDC power modules and HVDC transformers will be manufactured at two Siemens factories in Nuremberg, Germany.

Both converter substations will be using HVDC Plus voltage-sourced converters in a modular multilevel converter arrangement (VSC-MMC). In contrast to line-commutated converter technology, the HVDC Plus system works with insulated-gate bipolar transistors that can be singly switched off, enabling the commutation processes in the power converter to run independently of the grid voltage. The very fast control and protective intervention capabilities of the power converters provides a high level of stability in the transmission system, which primarily serves to reduce grid faults and disturbances in the three-phase AC network. This significantly increases supply reliability for utility companies and customers.

Prysmian Group, in consortium with Balfour Beatty, won the contract for the realisation of the new high voltage direct current interconnector. Prysmian will co- ordinate the design, supply, installation and commissioning of the link for a consideration of about €79 million. RTE will undertake the installation of the underground AC cables in France.

The chosen route provides several environmental and other advantages. Using an existing tunnel eliminates the need for a new environmental assessment, as well as reinforcing Eurotunnel’s economic model. There will be no undersea cables, thus avoiding any interference with marine life and eliminating the danger of anchor-drag from shipping. It is also expected to reduce carbon dioxide emissions by approximately 6 million tonnes by enabling demand in Britain and France to be met by the most efficient generating plants.

The cabling project consists of providing the ±320 kV extruded HVDC underground cable turnkey system – the engineering, production and installation of one HVDC symmetrical monopole circuit along a 51 km route. Using one of the rail tunnels, rather than the service tunnel between them, confers practical benefits associated with having primary utilities such as cooling equipment already installed. Prysmian will also supply and install underground cables for the HVAC link to the Sellindge substation in the UK. All cables will be manufactured in Prysmian’s plant located in Gron, France.