Westinghouse’s Jeremy King and Uffe C. Bergmann discuss the next leap in design of their boiling water reactor fuel. 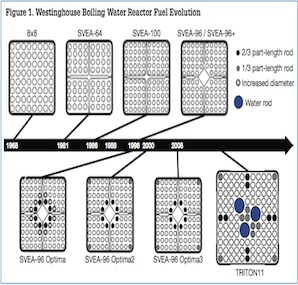 Over several decades, the cost efficiency of nuclear power plants has been improved by various methods including power uprates and optimized fuel efficiency, with higher burnup and longer fuel cycles, among other innovations. Westinghouse continues to invest in improving fuel efficiency and has now developed an 11×11 boiling water reactor fuel design called TRITON11TM.

The company fully supports and strategically operates to further industry’s progress toward attaining the goals of the US-based Nuclear Promise initiative to improve safety, reliability and economic performance. TRITON11 was developed with the key objectives to significantly reduce fuel cycle costs and increase overall reliability. In particular, the fuel has been optimized for both short- and long-cycle operation, as well as for uprated cores and higher burnups. While fuel failure is not a significant safety concern, a single fuel failure can cost in excess of a million dollars. The fuel has also been designed to meet the varying requirements of boiling water reactor utilities.

The entire evolution of the Westinghouse boiling water reactor product line is shown in Figure 1. With lower fuel cycle costs being particularly important in a competitive electricity market, the flexibility of being able to operate the fuel with high efficiency in both 12- and 24-month cycles is highly valued, as is the possibility of extended load-follow operation. Another economic consideration in the design was the back-end costs of the fuel cycle as solutions for final nuclear fuel disposal are being realised in several countries. This fast-approaching reality was also a driver for higher burnup and increased uranium loading of the fuel. The TRITON11 fuel design has been carefully adapted and optimized to serve each of these current and future needs.

The high-level objective of TRITON11 was to improve the nuclear and thermal-hydraulic performance of the fuel as compared to any existing 10×10 or 11×11 boiling water reactor fuel design. The new design allows reductions in fuel cycle cost and increased operational flexibility, while maintaining and further improving the current fuel reliability of Westinghouse’s Optima3 design. This high-level objective was broken down into the following objectives:

In total, 109 fuel rods make up the fuel assembly. The heated rod length (sum of all rods) is increased by 10% as compared to Optima3.

The internal cruciform water channel concept of the Westinghouse SVEA-96 fuel assembly shown in Figure 3 has reached its full potential as a 10×10 design and had to be abandoned when moving to the 11×11 design. The SVEA-96 cross channel naturally fits into a rod lattice with an even number of rows and columns but is less suitable for 11×11. Optimizing the number and size of internal water rods to maximize reactivity at hot conditions, minimizing rod power peaking and improving cold shutdown margin required significant developmental work. For TRITON11, this effort resulted in obtaining the optimum hot reactivity and rod power peaking with three water rods, which expands the non-boiling moderator beyond designs with one or two water rods.

The three water rods adapted to the TRITON11 11×11 rod lattice also allow optimum thermal-hydraulic performance and position the center of gravity close to the center of the fuel lattice. The dispersion of the moderator away from the center gives a more homogenous, efficient moderation of the fuel rods.

The part-length rod design and uranium-to- moderator ratio strongly influence key nuclear and thermal-hydraulic design parameters such as shutdown margin, isothermal temperature coefficient, core stability and local power peaking (impacting linear heat generation rate and critical power ratio). Considerable effort was invested to find the optimum uranium-to-moderator balance to reach the level of design flexibility achieved in TRITON11. While the uranium weight was significantly increased to realise related benefits, the part-length rods more than compensate for the related negative impacts this would normally have on core stability and shutdown margin. All part-length rods are positioned adjacent to the water rods or close to the periphery to make more favorable positions available for burnable absorber rods, which gives flexibility to further optimize shutdown margin while maintaining a stable hot excess reactivity.

The TRITON11 spacer is thinner and shorter than spacers that are based on the traditional dimple-spring concept. This is possible due to the mechanical strength of the Optima3 spacers in which flexible cell walls provide line contact with the rods. Parasitic absorption is reduced, providing important enrichment savings (~0.04 wt% U-235), and reduced pressure drop, which allows for an increase in uranium. The design results in improved critical power ratio, thanks to the increased surface heat transfer area and further optimization of spacer mixing vane features.

The TRITON11 nuclear and thermal-hydraulic performances described fulfill the design objectives by providing large reductions in fuel cycle cost and increased operational flexibility. Direct comparisons with Optima3 fuel show typical enrichment savings of 0.10-0.15 wt% U-235, while reducing the reload size. Reload size is reduced as a result of the increased uranium per assembly in TRITON11.

TRITON11 fuel uses materials with known benefits proven through years of Westinghouse operating experience and use in previous Westinghouse boiling water reactor fuel products, such as:

The fact that the same robust Low Tin ZIRLO material is being used in TRITON11 for both the outer channel and water rods ensures a predictably low differential growth between all individual components.

The use of HiFi as cladding material in TRITON11 will further increase margins to cladding embrittlement from hydrogen pickup during normal operation as well as in postulated loss-of-coolant accident and reactivity insertion accident scenarios. Significant operational experience with HiFi has been demonstrated. The successful Westinghouse fuel cladding Zirconium Tin liner currently used with LK3/L cladding is maintained in TRITON11. No duty-related failures have ever occurred with Westinghouse-lined fuel. While an argument has been made that a liner for 11×11 fuel is not needed due to the low linear heat generation rate, Westinghouse considers the liner necessary to enable increased margins to pellet cladding interaction failure and thereby allow more flexible operations. The liner is an important complement to the Westinghouse-doped pellet, ADOPT.

The TRITON11 fuel assembly design accommodates two approaches. For the ABB boiling water reactor designs in the Nordic countries, the current approach in which the channel is fixed to the inlet components as one unit and the bundle, including bottom tie plate and handle, is loaded into the channel from the top, will continue to be used. For all other boiling water reactor designs, the approach will be that the bundle is fixed to the inlet components as well as the handle, and the channel is slid over the top and locked to the handle during operation.

In both approaches, the three water rods in each fuel assembly are connected to both the handle and the bottom tie plate, constituting the load-bearing structure for handling the fuel bundle. Capture features on the water rods secure the spacers against axial movement. Since two water rods are sufficient for carrying the weight of the entire fuel assembly under all conditions, having three provides redundancy to help avoid load chain failure. The use of Low Tin ZIRLO material for the water rod tubes further strengthens the load chain by maintaining low hydrogen pickup and limited corrosion at the highest burnup levels.

While TRITON11 fuel is equipped with the same flexible sleeve-type spacer design as  Optima3, the sleeve has been adapted to the smaller fuel rod diameter and pitch of TRITON11 and is laterally scaled up for the single-unit TRITON11 fuel bundle. Additionally, while the Optima3 spacer grid already has enhanced debris resistance, the TRITON11 spacer grid has been further optimized to prevent capturing debris. Also similar to Optima3, working in conjunction with a full-size TripleWave+ debris filter, the TRITON11 spacer grid has been designed so that it will not catch debris small enough to pass the debris filter.

In addition to being fabricated with Low Tin ZIRLO, the TRITON11 channel sheet has been further optimized against bulge in the lower region with thick corners and thin mid-sides.

The TRITON11 fuel product is in the final stage of development prior to insertion of lead test assemblies. The detailed fuel design has been completed, with the exception of the spacer grid thermal-hydraulic features, which are still being optimized for dryout performance. Extensive testing and analyses are ongoing so that all design objectives are fulfilled. Various tests are being performed in the Westinghouse Nuclear Fuel Factory in Västerås, Sweden, to verify manufacturability and prepare for lead test assembly production. Concepts for fuel service, inspection and repair are currently being developed following a rigorous process. This process includes regular design reviews involving experts throughout Westinghouse and industry.

In preparation for the 11×11 thermal- hydraulic tests currently underway, several scoping tests were performed in a 5×5 geometry. An example of the test geometry is shown in Figure 5. In addition to dryout measurements, specialised instrumentation was used to characterise the local flow conditions at the outlet of the fuel assembly above the part-length rods, as well as between full-length rods.

As shown in Figure 6, optical sensors were used to measure the local void fraction. Optical sensor probes utilize the discrete variation of the refraction index between liquid and gas to identify which phase is in contact with the tip of the sensor. The response time of the system to a phase change is very short (< 1 μs) and the tip of the probe is very thin (~30 μm), which enables individual drops in annular two-phase flow to be detected.

The present application to boiling water reactor flow conditions is first of its kind. Figure 6 also shows an example of the output signals. Local flow velocity was calculated by performing combined measurement of local dynamic pressure by Pitot tubes. The results were used to further validate the sub-channel code VIPRE-W for use with current and future, that is, 10×10 and 11×11 boiling water reactor fuel designs.

The mixing vane features of the TRITON11 spacer grids have been optimized by computational fluid dynamics. Figure 7 shows an example of optimizing the positioning, size and shape of the mixing vane between four fuel rods. This is expected to yield more uniform and larger deposition of drops onto the fuel rods downstream of the spacer grid, improving dryout performance.

The TRITON11 spacer grids inherit the important benefits of enhanced debris failure resistance and low pressure drop from the Optima3 spacer design. When exposed to mechanical loads, the cell structure deforms, elastically distributing load and stresses evenly throughout the entire spacer grid. This capability significantly increases the load capacity of the spacer, which enables less material use and important enrichment benefits due to lower parasitic neutron absorption.

Although the TRITON11 fuel geometry differs quite significantly from preceding Westinghouse fuel designs, most of the assembly components have already been proven in previous products and are simply adapted to the new geometry.

With the detailed design completed, TRITON11 fuel assembly is in the final stage of development prior to insertion of lead test assemblies.