One hundred percent of Australian farmers questioned in a snapshot survey believe that their small dams are safe. This is despite the fact that more than half of the respondents do not spend any money on dam maintenance. Such facts underlie the worrying situation in Australia where complacent attitudes, and a lack of dam safety-driven policy, are compromising the safety of thousands of small farm dams. Dr John D Pisaniello gives an interesting insight into the problem. 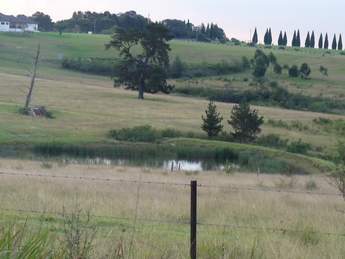 The failure of a large dam is generally more spectacular than its smaller counterpart and receives much more publicity. However, small failures, particularly those at privately-owned farm dams, occur more often. Indeed, the total annual cost of small dam failures can be greater than the rare failures of large dams.

Small dam failures can still have disastrous consequences. For example in China, the 1975 failure of the Shimantan and Banqiao dams was the result of the cumulative failure of 60 upstream dams. More than 230,000 people died. While in 1982 the failure of the 8m high Lake Lawn dam in Colorado, US, killed three people and caused US$31M in damage, despite warnings and evacuation.

Australia has many small, privately owned dams and there are estimated to be 735,000 small farm dams. More farm dams are still being built to capture water as changes to water allocation policies in Australia have been mooted since the early 1990s.

It has been clear for some time that the country has a problem with private dam safety – thousands of these small structures have failed. Although Australia is paying much attention to the safety of medium to large scale dams, it is not taking the potential problems associated with smaller dams seriously. In particular there is the cumulative safety threat that they pose in catchments.

This was demonstrated in the Adelaide Hills of South Australia in 1992. Extreme weather with rainfall events of 1-in-60 years, resulted in widespread damaging floods from farm dam failures. It was also found to be of concern in a flood study of the large public Kangaroo Creek dam in the same state. The modelling procedure adopted in 1995 found that the peak inflow to the dam would increase fourfold and cause it to fail, assuming all the small dams in the catchment failed at the same time in an extreme design flood event of only 1-in-200 years. The cumulative failure of these small dams was a reasonable assumption. Studies in 2005 found that most small dams in South Eastern Australia would not withstand the 1-in-100 years design flood event.

The likelihood of disastrous, cumulative-style dam failures in Australia is set to increase even more. Global warming means that extreme flood events will become more probable.

Many private farm dams are unsafe due to improper design, particularly, flood capability design, general lack of review and maintenance, and other inadequate on-farm practices. The main problem is that landholders hire contractors to construct dams but contractors are not, typically, trained or skilled in the design of dams. This means that most farm dams are not built to an adequate standard. What is disturbing is that private owners tend to neglect review and maintenance of dams and develop a sense of complacency, believing that as the dams have not yet failed, they never will.

Coupled with this problem is that the typical probabilities required for design floods are beyond the average farmer’s comprehension. The result is that dams are deprived of necessary review, maintenance and upgrading. Consequently downstream communities are placed at risk.

Water allocation policies and restrictions are also tempting farmers to compromise spillway safety in their efforts to increase the water captured in dams. Blocking a spillway allows a farmer to store significant amounts of potentially non-entitled water. The outcome is that already under-designed spillways become more inadequate and downstream communities are subjected to even greater risk. Another University of South Australia study looked at the problem in 2008. Of 48 randomly targeted hazardous small farm dams in South Australia, 73% of the spillways were blocked by artificial obstruction.

To research the problem further the University of South Australia was awarded funding by the Australian Research Council. The project is led by Dr John Pisaniello and Professor Roger Burritt and includes PhD research by Joanne Tingey-Holyoak. It is due for completion in 2012 and will look at how to manage water storage on farms for sustainable and safe catchments by developing better understanding of attitudes, complacency and perceptions of all stakeholders involved. It will also look at other interrelated factors such as technological, regulatory, economic, environmental and social issues, including cultural habits and conflicting values and interests. A linked University of South Australia project funded by Austraining International sees Maters student Tuyet Dam investigating similar dam safety issues in Vietnam (due to be completed in 2011).

If small dams are located upstream with the potential to cause cascade failure of larger dams, then ANCOLD (2000a) believes the combined effect of multiple dam failures should be the basis of the hazard category of the upper dams. If strictly interpreted, this guideline would deem that all small dams in a catchment upstream of a large public reservoir should be regarded high hazard. Therefore each dam should meet the same higher design standard.

While this requires further research, it has nevertheless become clear that private dams in catchments of large public dams should be registered, and at least controlled for spillway adequacy regardless of size and hazard potential. They should at least be mandated to meet ANCOLD’s minimum fall-back design criteria for low hazard dams (1-in-100 to 1-in-1000 years design flood).

In Australia most government dam-owning agencies evaluate public dams in terms of risk and do so in accordance with current guidelines at great cost. However, there is a policy vacuum in much of mainland Australia on the private dam safety front. Although New South Wales, Victoria and Queensland do have their policies, they only address problems associated with hazardous dams which are usually the larger more significant on-stream structures. Due consideration isn’t being given to the problems associated with the multitude of smaller off-stream catchment dams and their supervision and management.

South Australia has around 20,000 farm dams in the Mount Lofty Ranges and at least 100 of these are large enough to cause serious consequences if they fail. However, the state has a distinct lack of dam safety policies and there are no statutory provisions to ensure adequate design, construction or supervision and maintenance of potentially hazardous private dams.

The South Australian government has had the opportunity to include dam safety assurance measures in water laws but, despite research and evidence, it has not been considered critical enough by policy makers. Perhaps a policy response will never happen unless an actual disastrous dam failure occurs. This is a reactive rather than proactive approach in the state. The potential outcome could devastate downstream communities that bear the risks.

By acknowledging and addressing off-stream farm dams, Victoria has recently become a dam safety policy-driven state. The government partnered with the farming and downstream communities to bring about a law reform process in 2003. The Amended Water Act requires all potentially hazardous dams to be designed, constructed, operated and maintained according to standards and practises relating to dam safety.

Research is helping the the government of Victoria to keep abreast of law reforms and further refinements to the policy. A government commissioned study by the University of South Australia developed a cost-effective flood safety engineering procedure for Victoria in 2005. The government also helped to test spillway capabilities of hazardous private dams in Victoria under the current policy. Nearly all the dams tested have inadequate spillways, which is a further demonstration of why efficient and effective administration of dam safety laws is vital.

Victoria has a proactive approach to dam safety and its next step in terms of policy response is to address cumulative flood threats and spillway blocking issues. The government is also undertaking a review of the state’s dam safety regulation.

In contrast, dam safety policy-strong New South Wales is the only Australian state to have a specific dam safety act, issued in 1978. The dam safety committee sets standards and monitors prescribed dams (which are normally higher than 15m or smaller dams with a high or significant hazard rating). Hazardous smaller off-stream dams may only be prescribed when they come to the attention of the dam safety committee.

To test the effectiveness of this system the University of South Australia carried out a study in 2005. Risk failure from overtopping was found to be consistently unacceptable for 80% of the non-supervised dam sample. Not surprisingly, all supervised dams met necessary standards for spillway safety.

These results reinforce that dam owners, unless regulated and supervised, take no action in terms of analysis and upgrading of dams. Perfect results from the supervised sample demonstrate the effectiveness of properly administered dam safety assurance policy. New South Wales needs to widen its supervisory policy to capture more dams.

As Tasmania has over 30% of Australia’s total water storage capacity the state government saw the need to tighten controls to ensure dam safety. The Water Management (Safety of Dams) Regulations came into force in 2003 as it was considered inadequate to rely on non-statutory duty of care principles to ensure that dams were maintained in a safe condition.

The new legislation and regulations aim to ensure that best practice is followed in the construction, maintenance and surveillance of dams in Tasmania. Dams as small as 1Ml are supervised: this is in line with international best practice. In 2005 Tasmania had 5674 registered dams but this increased to 8000 in 2008. Many of these are newly identified and registered for the first time and are evidence that the policy is being administered effectively. Over 500 registered dams are significant or of a high enough hazard to require extensive statutory surveillance and reporting. About two-thirds of these prescribed dams are privately-owned.

The Tasmanian policy is administered through a clever and equitable user pays system where the government subsidises extensive dam supervision. It encompasses large and small dams of lower and greater hazards and takes into consideration community feedback, sustainable water allocation, cascade/cumulative threats and environmental impact. To avoid significant cost burdens, owners of smaller less hazardous dams do not require sophisticated engineering reports but can prepare a guided pro forma. A cost-effective spillway design/review mechanism is also being developed by the University of South Australia (see shaded panel for more details).

However, additional funding and staffing to achieve more timely administration of the policy may be required. Feedback from the regulatory authority indicates that it is taking considerable time, effort and resources to identify all existing dams in Tasmania that should be included on the register, and to ensure they comply with the policy. This has led to the adoption of a priority system in terms of strict enforcement of standards, which could potentially allow many smaller dams that contribute to cumulative threats to go unchecked for too many years.

The overarching implication for Australia is that there is a need for more uniform dam safety assurance policies across the country. Despite much research, warnings and encouragement on numerous fronts over recent decades, uniform policy in Australia is yet to be achieved.

The United States’ approach to achieving uniform dam safety policy under a federal system of governance (which is similar to Australia) is one that works well. The US’ approach shows that federal involvement can work positively in obtaining national cooperation. It therefore sets a good example for Australia to follow in order to:

• Ensure more efficient and effective administration of the policies.

The ultimate aim is to have an effectively implemented policy in each state which meets an acceptable international benchmark.