Atlantis is seeking funding to continue with its large cluster tidal stream prototype. Meanwhile the ETI has concluded that wave energy is too expensive compared to competing renewables, whereas tidal stream energy is viable but needs more funding. By Leonard Sanford 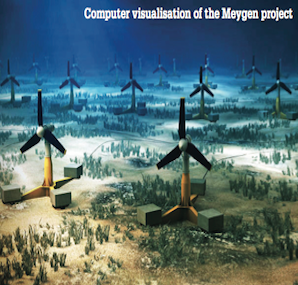 Atlantis Resources has been granted fell accreditation by UK Regulator Ofgem for Phase 1A of its MeyGen project in the Pentland Firth, Scotland, specifically in respect of its 6 MW tidal stream generating station at the Ness of Quoys in Caithness, which commenced commercial operation in November 2016. This means that under the terms of the Renewables Obligations (Scotland) Order the MeyGen project will now be issued with five Renewables Obligations Certificates (ROCs) for every MWh of renewable electricity generated by the station.

The AR1500 tidal stream turbine has recently been deployed at MeyGen and has already successfully exported power to the grid as well as undergoing a run operated at full power. It is the fourth turbine in the array to be deployed offshore and connected to the grid onshore at the Ness of Quoys, where power from the project is converted and combined to form a 6 MW supply direct to the local electricity distribution network in Caithness.

Tim Cornelius, chief executive of Atlantis Resources, commented: “The granting of full accreditation for Phase 1A of the MeyGen project represents a truly historic milestone for the MeyGen project, Atlantis, and everyone associated with the tidal power sector in the United Kingdom. The project has gone from strength to strength over the past 24 months and even greater strides will now be made as we prepare for construction of the next phase of the MeyGen project to start later this year.”

Atlantis has now applied for a €10m European Investment Bank loan to finance the next phase of its flagship MeyGen tidal array. The company has applied to the Luxembourg–headquartered institution for funding for the 6 MW MeyGen Phase 1B, also known as Project Stroma. Construction of the €57 m four-turbine array is scheduled for the autumn of 2017 with full operation scheduled for 2018.

Phase 1B is already well backed. It has secured a €20.3 m Horizon 2020 grant codenamed Demotide, and is the recipient of a €16.78 m NER300 award, money that was originally allocated to Marine Current Turbines in 2012 for the now defunct Kyle Rhea project, originally an 8 MW tidal stream array planned near Scotland’s Isle of Skye. MCT was at that time owned by Siemens.

Then in May 2015 Atlantis bought MCT from Siemens and in October the same year the European Commission’s Climate Change Committee approved a transfer of US$19.3 million in funding to Atlantis’ MeyGen project.

Atlantis needs new funding because the UK government’s renewables obligation scheme that is providing consumer-funded subsidies for its first four turbines is shutting down at the end of March this year, casting doubt over the project’s future financial support.

Under the government’s replacement scheme, technologies such as tidal, wave and floating offshore wind will no longer be guaranteed high levels of support dedicated to specific technlogies. Instead, they will compete against offshore wind farms and solar, technologies that are far more mature and therefore cheaper.

The claims of tidal stream energy for targeted funding are being backed indirectly by the Energy Technologies Institute, which has warned that tidal energy is at risk of being priced-out of an increasingly cost- competitive low-carbon market in the UK, unless a successful Contract for Difference (CfD) agreement can be implemented. It has concluded that wave energy is too expensive, while tidal stream energy is viable but needs more funding.

The ETI has established a set of priorities that would need to be fostered by the UK government if the marine energy industry is to keep pace with more established low-carbon energy sources such as wind and solar. Current costs for tidal energy are up to 10 times greater than its solar and wind competitors for the same funding.

ETI has called for a shift in focus to exploit tidal stream technology commercially. It claims that the technology can compete with other energy sources ‘over the coming decades’ but only if costs are reduced.

“The UK has some of the best tidal waters in the world, but these are generally a long way from grid connections and major population centres where the demand is greatest,” ETI’s strategy manager Stuart Bradley said. “While it has been demonstrated that you can create and capture energy from the sea it is currently very expensive to do so and this has to be addressed for the sector to grow. A rethink is required in wave [energy circles] to bring costs down, but the early signs are that bodies such as Wave Energy Scotland are tackling this challenge so support should continue to be provided for such work.”

Policy makers have the opportunity to enable large-scale deployment, the ETI notes, by striking successful CfD arrangements. In the 2016 UK Budget, £730m that could be used to support “other less-established technologies” was allocated to the next wave of CfD auctions.

In response to this need Atlantis has embarked on a round of savage cost cutting measures with the ultimate aim of cutting its power generation costs by more than half in an attempt to secure the subsidies that will enable its project to continue.

The first four Meygen turbines are due to receive subsidies of about £200 per megawatt-hour via the renewables obligation scheme, on top of wholesale prices at about £45 per megawatt-hour. In the forthcoming subsidy auction, offshore wind prices, against which Meygen must compete, have been capped at £105 per megawatt-hour in total. Atlantis CEO Tim Cornelius said he was confident that Meygen could compete ‘on a par with offshore wind’ in a subsidy auction this summer, when it would seek support for up to 76 MW, or about 50 turbines.

“We recognise that it’s ambitious, but it’s achievable,” said Cornelius. He is confident that Atlantis could achieve ‘dramatic reductions’ in costs by using a different type of foundation that required less steel, and by increasing turbine sizes.

The first four Meygen turbines cost £51 million. Atlantis is also close to going ahead with a second batch of four at a cost of £41 million. Mr Cornelius declined to say how much the bigger third phase would cost, but analysts at financial consultant Macquarie believe that it could drop to just over £200 million, enabling it to operate at £105 per MWh.