As offshore wind farms move to deeper waters, the industry faces a series of technological and operational challenges. Jean Huby, CEO of Areva Wind, talks to Philip Kleinfeld about designing machines in harsh conditions and the new M5000 turbine. 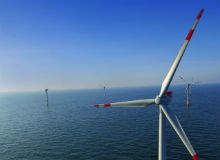 Europe may be in danger of not meeting its renewable energy targets but the offshore wind industry remains undaunted. In a recent study by PricewaterhouseCoopers (PwC), over two thirds of those surveyed expressed confidence in the future of the sector.

For European policy-makers, it’s a different story. In the UK, where offshore wind power generation has the potential to be higher than in any other country, legislators are being urged to extend crucial state subsidies. Existing support is expected to exceed £1bn for the first time this year, but talk of an investment squeeze is gaining traction as Energy and Climate Change Secretary Ed Davey attempts to push through his controversial new energy bill.

Having the political clarity necessary to secure investor confidence is a must for an industry still in its infancy. But these challenges, however serious, would be moot without the right technological support. Of the financial institutions polled across Europe in the same PwC survey, 73% flagged up technology, and the related area of operations and maintenance, as ‘high risk’ in terms of investment.

That shouldn’t be too surprising. The sea is a formidable setting in which to develop and test new technology. Most existing wind turbines have been constructed as marinised versions of standard onshore designs. But as the industry improves its levels of industrial know-how, this is beginning to change.

"There are big differences between onshore and offshore turbines," says Jean Huby, CEO of Areva Wind. "That’s particularly true when we’re talking about offshore projects that operate at depths of over 20m and distances of about 20-30km. It’s not a simple wet-feet situation."

Areva’s new wind turbine, the M5000, has been designed with many of these challenges in mind. Fixing a mistake on a machine 30km from the shore isn’t easy when weather windows are so unpredictable. It calls for a fundamentally different kind of maintenance strategy and much higher levels of reliability with the machine itself.

"There are big differences between onshore and offshore turbines, particularly when we’re talking about depths of over 20m and distances of about 20–30km. It’s not a simple wet-feet situation."

"The challenges of offshore design had a big impact on the technological development of the M5000," Huby says. "It means that you have to go for bigger machines to ensure that return on investment is sufficient. We wanted to avoid a situation where the costs involved in building the foundations were too big for the amount of electricity being produced. Reliability was also very important. In such difficult conditions, you have to have machines that require limited maintenance and correction. Having redundancies in your key components so that you can correct potential mistakes by switching to a back-up is key. We’re also using helicopters more than we did in the classic offshore wind farms. They allow us accessibility that is significantly higher than ship-based maintenance strategies."

The first prototype for the M5000 was built in 2004, designed to incorporate a medium-speed drivetrain with a slow-moving gearbox and reduce the multiplication factor associated with traditional onshore machines. The model has a particularly compact design, built to avoid misalignments between the generator and the gearbox.

"What all of this brings is a machine that is genuinely innovative," Huby says. "That’s important because we see a lot of turbine manufacturers moving away from traditional onshore-type design for offshore. The M5000 machine has a very loose drivetrain, which has challenges from a technological standpoint. But it’s supposed to bring greater reliability."

The turbine’s reliability has already been proven at one of Areva’s offshore pilot wind farms in Germany. Around 80% of the failures at the base have been handled online, without the need for physical intervention at the machine. The medium-speed drivetrain is also performing well, according to Huby.

The industry is certainly benefiting from more sophisticated testing facilities, both onshore and offshore. Areva worked closely at the production and development stage with a testing facility in North Germany. It also developed a test bench to perform full checks on each machine as it leaves the production line.

"We’ve been testing the machines at their limit," Huby says. "We want to spot any mistake in the production when the machine is still onshore. That will help us save a lot of time when we go offshore. This test bench was a €16m investment and is going to be used for some of the development process we’re doing for other parts."

Part of that focus on quality can be explained by mistakes that surfaced with Areva’s previous model at the Alpha Ventus wind farm. A problem with the gearbox, which first arose in 2010, led to serious overheating on the machines. The mistake was corrected quickly and transparently, but it taught the company some important lessons about supply chain monitoring.

"It’s worth remembering that the company is still very new," Huby says. "It was part-purchased by Areva back in 2007, but full integration of the group was only finalised in 2010. With Alpha Ventus it became clear that all the processes required were not yet up to speed. Our broader experience with the turbine has been extremely positive, however. It’s functioned very well since we made the original repairs."

New challenges of transport and installation

Other important issues around transport and installation also need consideration. Moving to a bigger machine like the M5000 creates a series of headaches around design. The turbine needs to be as light as possible to make loading and transport simple. Erecting the blades is also difficult, particularly with high wind speeds and hubs that are hard to turn.

"We want to spot any mistake in the production when the machine is still onshore. That will help us save a lot of time when we go offshore."

"We’ve developed an innovative installation solution," Huby says. "Instead of putting the three blades on the hub onshore, we go offshore without actually assembling the blades. That saves a lot of space on the deck and ship. When you do go offshore, you can stick the blades on the hub and position it properly. We are not competing with people who sell installation equipment, but we are partnering with them.

"The offshore industry is still very young. If you look at the purpose of governments and companies, there are thousands of megawatts due for installation over the coming decade. Future success depends upon working as a team, with investors, suppliers, installation and cable companies, and with other competitors across the board."

Having made the choice of offshore wind at an early stage, Huby hopes Areva will become a leader in the European market in the years to come. As the sector looks to attract long-term investment, the company will need all the political and technological help it can get can get to achieve that goal.