An ultra-fast ‘mechatronic’ circuit breaker has been developed by Alstom specifically for duty in HVDC networks. The successful development at an economic cost of a high speed DC breaker, a critical component for protection of the grid, would pave the way for continental-scale, meshed DC networks. 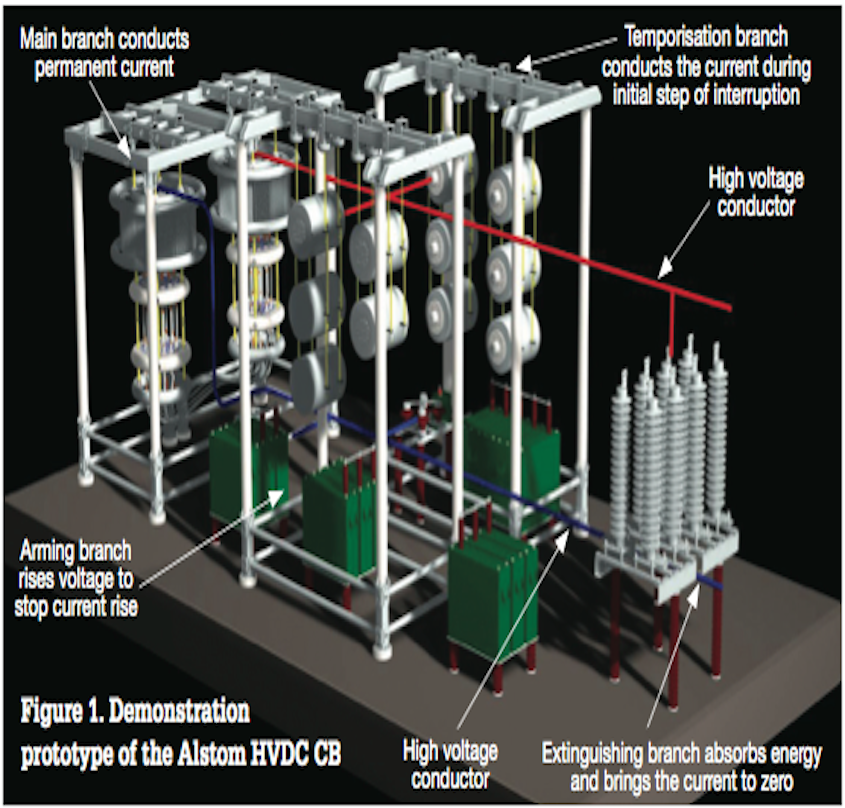 An ultra-fast ‘mechatronic’ circuit breaker has been developed by Alstom specifically for duty in HVDC networks. The successful development at an economic cost of a high speed DC breaker, a critical component for protection of the grid, would pave the way for continental-scale, meshed DC networks.

At the Cigré 2014 Session Alstom announced the successful completion of tests of its prototype circuit breaker designed for meshed HVDC networks. The development and testing were conducted by Alstom with a number of industry partners, under the auspices of the European Union’s ‘TWENTIES’ development programme, co-funded by the EC’s Framework 7 platform. ‘Twenties’ is an acronym for ‘Transmission system operation with a large penetration of Wind and other renewable electricity sources in Electricity Networks using innovative Tools and Integrated Energy Solutions’.

The creation of a fast and reliable high voltage DC CB has been a major stumbling block in the development of DC grids primarily because the problem of cutting a high voltage DC line in a time comparable to the half-length of an AC 50 or 60 Hz cycle, that is, less than 8 ms, presents an inherently difficult problem in fast energy absorption, likened by some electrical engineers to the problem of stopping a bus doing 50 km/h in 10 cm. AC circuits do not exhibit this problem because the current in each phase passes through zero 100 or 120 times a second, allowing plenty of time to interrupt it. But solving it economically for DC has given rise to extensive R&D in both the public and private sectors.

Such breakers are needed to isolate faults, and the rate of rise and amplitude of the fault current is dramatic, potentially causing collapse of the grid in a few mS. Also, maintaining a reasonable level of high DC voltage is a precondition for the converter station to operate normally, and in order to minimise disturbances in converter operation, particularly the operation of stations not connected to the faulty line or cable, it is necessary to detect and clear or isolate the fault within a few milliseconds.

High voltage DC CBs have existed for some years, but they are expensive and bulky. A DC grid would require many such breakers, sited at most junction points (Figure 2), which is one of the reasons single line point to point HVDC transmission has been pressing ahead at speed while work on DC grids has not yet resulted in a real world transmission or distribution DC network.

In December 2012 ABB produced its breakthrough design, a hybrid device in the form of an 80 kV module that solved the technical problems involved by combining very fast mechanical switching with power electronics, and was capable of interrupting GW power flows within 5 milliseconds.

And recently a new kind of solution has been proposed, by a team at Birmingham university, that incorporates fault detection and voltage control in the AC/DC converters, allowing control from the AC side (see panel, right). Now a new solution has been proposed and tested by Alstom and its partners. The programme’s 120 kV prototype successfully interrupted a 5200A current at 160 kV, with full extinction of DC in less than 5.5 milliseconds, and under the real operational constraints of a high-voltage DC transmission grid.

In March 2014 Alstom announced that it had successfully completed a series of tests, based on IEC standards for HVAC breakers, on its high-voltage DC circuit-breaker prototype. The series of tests consisted of reproducing the real operational constraints in a high-voltage DC transmission grid. These tests marked the final stages of work headed by RTE (Réseau de Transport d’Electricité, the French transmission operator) for the operation and protection of DC grids in Europe’s TWENTIES research programme. This work contributes to the development and implementation of new technology, facilitating the integration of renewable energy into Europe’s electric power system.

All tests were witnessed by an RTE representative and by representatives from an independent, RTE-mandated test laboratory. They were grid simulation tests and were designed with the key objective of validating of equipment behaviour under actual operating conditions, using voltage that was high enough to carry power over long distances. In particular, they demonstrated the structure’s resistance to standard lightning impulse voltage, to transient currents exceeding 10 kA, and to heating caused by permanent current and by overload current. The current that was interrupted during the tests had reached over 5200 A, with switching voltage peaking atmorethan160kV.Theinterruptionand total extinction of current across the grid were achieved in less than 5.5 milliseconds, thereby succeeding in the most challenging part of the circuit-breaker’s purpose.

Three different classes of requirements were identified for the duty of DC CBs, depending on the ratings of the grid and the section of the grid being protected. Two of them are met by the performance of this demonstrator which was designed to meet the stringent speed requirement at an acceptable cost.

Fault clearing time constraints also required the development of selective and very rapid protection schemes using optical fibre communication. Based on differential overcurrent relays, this was shown to be effective for cable distances up but no longer than about 200 km. It was validated experimentally on the DC Grid mock-up, where opening orders are sent in less than three milliseconds.

A DC circuit breaker must perform two duties: first, it produce an opposing voltage to halt the rise in fault current, and second, it must absorb excess energy from the network to bring the current to zero.

To be used for direct current interruption, the circuit breaker has to perform 10 to 20 times faster than in AC grids, which typically operate in the 30-50 mS range. Current interruption in DC networks must therefore be done very precisely and much more rapidly.
“One technological option was to adapt an existing DC-breaker product that is used in HVDC point-to-point connection," commented Wolfgang Grieshaber, research engineer and head of the DC CircuitBreaker&NewSolutionsgroupin Alstom Grid’s ARC Technology Centre in Villeurbanne (France).

“However, with break times in the range of 27 ms to 40 ms, this type of breaker is relatively slow because its main component is a conventional AC arc chamber." Another option was to associate power electronics with an ultra-fast disconnector. "This is the option that was chosen for the demonstrator because it has low on-state losses, a very short break time and is totally SF6 – free."

These insights – and three years of R&D – led Alstom to deploy some of its existing technologies as a springboard from which to develop the UFMCB. The prototype design comprises the following main components arranged in a three-parallel-branch design (see Figure 3):

• a mechanical stage, which acts as an ultra-fast disconnector;
• a power electronics section (capacitor and thyristor circuitry) which diverts the current flow to the parallel branches;
• a surge arrester to dissipate the excess energy of the network caused by the interruption.

The UFMCB’s operating principle is to commutate the current in steps, first from the low impedance branch to the auxiliary branch and then into the extinguishing branch. The mechanism of internal breaker commutations is based on generating a reverse current to oppose the network current.

Full extinction of DC in 5 mS

This technology was first tested on a medium voltage version before scaling it up to the high voltage DC-CB demonstrator. In the future it is expected that this technology will be used for HVDC grids connecting multiple offshore wind farms to the coast. Tests were conducted in close co-operation with RTE, the French power network operator. All tests were witnessed by independent bodies and the European Commission Technical Reviewer. The ultimate test, validating the power switching performance, was conducted on November 29.

Some additional improvements are still needed, and are going on now, to enrich or complete the circuit breaker’s functionalities, extend its performance range and facilitate its interface with grids. Even so, this prototype opens the door to the development of ultra-fast mechatronic circuit breakers suitable for any DC transmission voltages, says Herr Grieshaber. "We see this innovative breaker as a very cost-effective solution, since it offers many advantages such as the ability to partition a network into sub-networks. All these results represent a major step towards realising the Supergrid, which will effectively integrate renewable energy sources and enable power trade and bulk supply across continents."

Meshed DC networks are still in the research and development stage, since only point-to- point or radial multiterminal DC links are in operation so far. Therefore, several possible design strategies can be studied for HVDC networks, depending on integrating existing DC links with different voltages or not. In the latter option, i.e., when the whole network is operated at a single DC voltage level, one possibility is to design a DC grid in the same way as an AC grid: DC substations would be connected together in a meshed configuration, each DC overhead line or cable being protected by a DC breaker at each end. AC generator units and loads would be seen through AC/DC converters whose technology and design could influence the behaviour of the DC grid.

“The similarities stop there," comments Lucas Violleau, circuit breaker engineering specialist at RTE, the French power transmission operator. "AC grids can face faults for hundreds of milliseconds before losing their stability, because a large amount of kinetic energy is stored in generator units with high inertia. In a DC grid the energy reserve is smaller than in AC grids and is only made up from the system capacitance and inductance. When a pole-to-pole fault occurs, the voltage collapses in less than 10 ms. To avoid a complete DC network outage, the fault must be cleared as fast as possible in that period of time. This requires high performance direct current circuit breakers, especially for meshed DC grids with high short-circuit currents as demonstrated in the TWENTIES project."