Airborne wind energy – a billion euro industry or a straw in the wind?

If the optimism surrounding the development of kite power turns out to be justified, arrays of tethered kites and balloons out at sea could become a familiar sight. 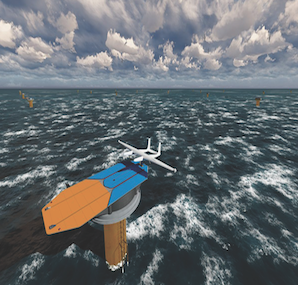 Airborne wind energy (AWE) employs kites, tethered drones or turbines in balloons to make electricity, accessing more consistent, stronger winds above those reached by wind turbines on land, and the possibilities have attracted the interest of developers. As a result an estimated 50 small enterprises around the world are investigating the possibilities inherent in kite power, and some of them have received backing from large interests.

The motive power comes from harnessing the constant pull on the airborne sail, and is the greater because of the higher wind velocities available at altitude. It is also cheaper to install, as no tower or foundation need be constructed, is less visible, and it may even be used as a mobile generator. Initial indications suggest that 10 kW modules would be the likely scale of the prototypes. Its advantages in initial cost and relative invisibility make it suitable for either onshore or offshore use, but the relative ease with which it could be used at deep water locations suggests that it is a natural for deployment in offshore arrays.

Business consultant IDTechEx believes the potential market could be as much as €3 billion. The company’s recently published market assessment Airborne Wind Energy (AWE) 2017-2027 states that ‘four developers plan to commercialise their AWE systems in the next four years, and others promise sales later. Several will succeed: the market may grow in a similar way to traditional wind turbines.’ There is a good chance, says the report, that AWE will compete with conventional wind power on total cost of ownership but also by being part of the green alternative to diesel gensets. Favoured markets alongside solar power would include microgrids, electric car charging stations, and remote communities, especially where grid compatibility is not an issue.

To quote the report again: “AWE is disruptive because it could be much less expensive and intrusive than the traditional wind turbine. Indeed, it is capable of much more with its uniquely low capital cost and easy transportability. AWE has moved from a hobbyist curiosity to attracting around $200 million initial investment from giants Google, EON, Shell, Schlumberger, Tata, Softbank and others.”

E.ON is one of the companies establishing a position as a frontrunner and early adopter in airborne wind energy. The company has committed to invest in the development, and if successful, construction and operation of a demonstration site in County Mayo in Ireland. In parallel, E.ON has entered into a collaboration agreement with Netherlands based Ampyx Power as its first user. Ampyx has been working on its system for five years. The development opens up new possibilities for collaboration with a multitude of companies pioneering airborne wind power generation technology as well as being a platform working together with research and governmental institutes.

Airborne wind technology harvests wind energy by using a fixed wing or sail in altitudes up to 450 metres. In addition to its capex advantage, the technology is easier to deploy in the deeper waters surrounding countries such as Portugal, Japan and the United States.

The investment marks E.ON’s second major commitment in the airborne wind energy domain. In 2016, E.ON invested in the Scotland-based airborne wind energy start-up company Kite Power Systems. “Airborne wind supports one of our overall targets to drive down cost for renewable energy. In addition to making airborne wind competitive to conventional wind power, we would like to work with authorities and legislators to pave the way for introducing this exciting technology and eventually make it eligible to participate in tendering processes,” said Anja-Isabel Dotzenrath, CEO of E.ON Climate & Renewables.

UK based Kite Power Systems has secured £5m of new investment from E.ON, Schlumberger and Shell Technology Ventures (STV). The investment will support KPS’s plans to deploy a 500 kW onshore power system at West Freugh in South West Scotland in 2017, leading to a planned onshore demonstration array of multiple 500 kW systems within the next 3-4 years. Thereafter, KPS intends to develop a 3 MW onshore system at West Freugh as a prelude to deploying a similar sized power system in offshore waters.

The Scottish government is extraordinarily active in this area, and its waters contain two of the sites that claim to be the world’s first floating turbine array. In recent months it has given planning permission for a floating offshore wind farm to be installed in the North Sea off the coast of Peterhead, and granted a licence for the Norwegian energy firm Statoil’s Hywind commercial demonstration scheme of five turbines. These will be attached to the seabed by a three-point mooring spread and anchoring system, making them easy to install in deep water. Final commissioning could take place this year, according the company.

And in March it gave the go-ahead for a proposed eight-turbine floating offshore wind farm near Aberdeen. The £250 million Kincardine development has a permitted generating capacity of up to 50 MW. It is being developed by a joint venture of Atkins Ltd and Pilot Offshore Renewables. Eight Senvion 6.2M126 turbines will be installed 15 km south-east of Aberdeen, and tethered to the sea bed using Cobra’s Semi-Spar concrete substructure technology.

In 2016 Hexicon’s Dounreay Trì Ltd submitted an application to Marine Scotland to construct a demonstration floating offshore wind project at a site off the north coast of Caithness about five miles off Dounreay, and Paul Jones, chief financial officer of KPS said: “The backing of these [large investors will accelerate KPS’s commercial development plans towards the deployment of lower cost, deep-water offshore wind energy on a global scale.”

KPS was established in 2011 and to date has invested more than £3m in technology development, with financial support hitherto coming from the UK government, Shell’s GameChanger programme, and private investors.