Thanks to several large discoveries, the oil and gas industry is going strong in offshore West Africa. Didier Lluch, Repsol’s exploration director for Africa, explains why drilling in the region requires companies to adapt their seismic imaging techniques. 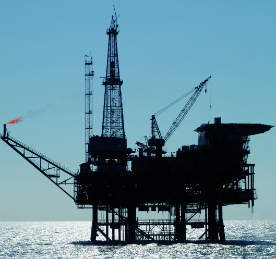 Upstream activity in offshore West Africa has flourished since the first oil and gas explorations carried out in the ultra deepwater Congo basin more than 50 years ago. In fact, the region has become one of the most important areas in the world for the exploration and production of oil and natural gas following a spate of large discoveries in the past few years.

Nigeria and Angola are the largest producers of oil and gas in West Africa, and represented 77.7% of the region’s total offshore production during 2001-2011. Nigeria has been an an OPEC member since 1971, and is a major producer of oil in the continent, holding the second highest amount of reserves. Angola has been an OPEC member since 2007, and in 2009 held the organisation’s presidency. That year, the country produced an average of 1.82 million barrels of crude oil a day, making it the largest crude oil producer in Africa and placing it seventh among OPEC members according to EIA. From January 2009 to June 2012, Angola accounted for 17 of a total 47 deepwater offshore oil and gas discoveries made in West Africa, and emerged as a thriving deepwater frontier.

A recent report by Barclays shows that exploration and production spending in Africa is set to rise by 4.5% year-on-year by the end of 2013 to reach around $25 billion, with Western Africa attracting the lion’s share of that fresh investment.

"Interest in West Africa from global oil and gas companies has highlighted the growing focus on pre-salt plays."

In fact, evidence shows that there is an almost perfect symmetry between elements such as source rocks, reservoirs, seals and traps, and oil types of the pre-salt geology of Brazil when compared with that of West Africa. Around 120 million years ago, both regions were part of a super continent known then as Gondwana, which was split by the Atlantic Ocean, leaving similar coastal sediment on both sides of the ocean. This has led geologists to believe that the oil deposits found in the Brazilian pre-salt layer could be mirrored on the other side of the ocean in the offshore deepwater in West Africa.

Geologists have proven that Angolan and Brazilian continental shelves share the most similarities, as they had been joined for a certain geological period. However, the discovery of Brazil’s pre-salt was not repeated with success in Angola’s deepwater areas until 2011 – before then, drilling in the pre-salt produced negligible results.

As a result of investigating the southern Atlantic conjugate margins, a historic event for the hydrocarbon industry in Angola occurred in 2011 when 11 deepwater pre-salt blocks in the Kwanza and Benguela basins were awarded by the Angolan national oil company Sonangol to a number of operators, including Repsol Consequently, oil companies worldwide are now applying their understanding of oilfields offshore Brazil to those located offshore West Africa, using sophisticated seismic imaging technology to reach oil located at water depths of more than 2,000m (6,560ft).

The use of traditional seismic imaging in analysing the geological systems in Angolan waters has, however, often proved difficult. This is due in large part to the existence of thick salt domes, mushroom-shaped structures that create the ideal environment for trapping oil deposits but that are notoriously difficult to see beneath, and so make seismic imaging precision difficult to achieve. Due to the crystalline-type structure, which creates noise in the seismic data and blurs images like a smudge on a camera lens, extremely complex algorithms are needed to achieve the accuracy that oil companies need in order to drill exactly in the right location and avoid the risk of drilling dry holes, where costs can often exceed $240 million.

To overcome the challenges associated with drilling dry holes, a number of oil and gas companies have adapted their seismic imaging techniques in order to make better-informed decisions about where exactly to drill for oil. Advanced techniques have included the development of reverse-time migration (RTM), an extremely powerful algorithm, which has addressed the limitations of current migration methods, to image and delineate complex geologic structures such as those in West Africa, and Angola in particular. Until recently, the primary obstacle to the large-scale, routine deployment of RTM has been a lack of computer power. RTM needs 30 times the computing power typically used in exploration techniques to be considered commercially viable.

Repsol has successfully invested in a new seismic imaging computing infrastructure to gain analytical insight into RTM, and collaborated with some of the world’s most experienced technology partners, including IBM, 3DGeo and Stanford University’s Stanford Exploration Project (SEP), to develop Project Kaleidoscope. Launched in 2006, it uses new models, algorithms and one of the world’s most powerful civilian supercomputers, located in Houston, Texas and built by IBM, to run the algorithms and process all the information much faster than existing seismic analysis platforms.

Expanding on its ten years of expertise in the region, Repsol recently entered into a partnership with Sonangol, which will enable the national oil company to use Repsol’s Project Kaleidoscope technology, a key tool in recent discoveries in Brazil and the US Gulf of Mexico.

In the long term, embracing new approaches to processing and looking deeper into seismic data will put exploration and production (E&P) companies in stronger, more competitive positions, without compromising the fundamentals of their corporate strategies. In this way, it is the pioneering firms that have been able to overcome the accuracy versus speed trade-offs that have characterised seismic exploration until now. In the future, access to more detailed seismic images will allow E&P companies to make more accurate and data-driven drilling decisions, substantially mitigating the risk of drilling dry holes associated with deepwater pre-salt plays. Furthermore, an enhanced view of petroleum deposits will put these companies at an advantage when tendering for offshore deepwater oilfields. As companies continue to apply advanced seismic imaging techniques to survey deepwater basins, West Africa certainly appears to be one of the most promising regions for future development opportunities.