Europe is leading growth in repower and refurbishment projects, with over 86GW of capacity due to be decommissioned by 2030. Sarah Williams speaks to Michael Wilkinson, service line leader for renewables asset operations and management services at DNV GL, to find out how approaches to life extension are developing, and how operators can capitalise on available resources. 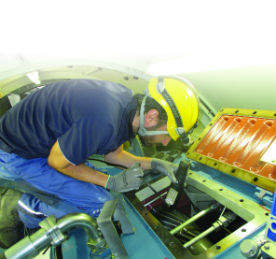 With many of the developed markets for onshore wind nearing capacity, and some ruling out new sites entirely, owners are seizing on repowering as a means to significantly increase yield using existing land.

Raising output, though, often means increasing the size of turbines too, and a wind farm’s two or three decades’ existence does not make planning permission for newer, bigger models a given.

What’s more, the financial viability of repowering is dependent to a large degree upon the relevant subsidies available, if any. Denmark and Germany, as examples, have enjoyed repowering incentives in recent years, while the UK’s push towards offshore makes repowering a much less viable option for British operators.

Opting instead to refurbish existing turbines can, therefore, give stakeholders an opportunity to extend revenues for up to a decade beyond the intended service life. This means that loan repayments for the site – often a large proportion of the original operating costs – will have been paid off, and profits can contribute towards funding later repower programmes where applicable.

At the same time, and contrasted with the obvious benefits of refurbishment, operators are not always fully appreciative of the many risks that must be taken into account, according to Michael Wilkinson of DNV GL. As service line leader for renewables asset operations and management services, Wilkinson is well versed in analysing the ongoing performance of wind farms.

He says that the risks of continuing to operate past the usually 20-year design life of a turbine are primarily associated with the cost of additional inspections and monitoring, as well as the problem of supply chain vulnerability.

“If you have an older turbine, will you still be able to service it with components as they naturally wear out, and what is the actual availability of the OEM to support you in that?” he asks. “If you require a type of maintenance that only happens after a certain period of operation, do you still have the manual to tell you how to do that, and is the OEM still around or has that information been lost?

“Then, from the financial perspective, there’s also a risk associated with things such as the future power purchase agreements or any market-based power prices and the regulatory permits connected with that. These are areas of uncertainty and the associated risk is difficult to manage but, nonetheless, you need to be able to appreciate it.”

Operating past the design life means using a machine below the intended level of structural reliability. Over time, this can increase maintenance costs, but could also cause dire consquences.

“You expose the owner and the stakeholders in the project to the possibility of catastrophic failure, injury to people, property damage and environmental damage as well,” says Wilkinson. “You don’t want oil pouring down the tower, for example, and the obvious impact on public relations. No owner wants to have their wind farm in the newspapers for reasons of catastrophic failure.”

With these vulnerabilities in mind, a risk-based approach to life extension can allow owners to implement best practice for inspection and maintenance. More often seen in the oil and gas industry, it’s a strategy steadily gaining interest within renewables.

Rather than inspecting each turbine periodically with a set checklist of tests and surveys, a risk-based approach removes the assumption of when, how and what you inspect. Instead, it establishes inspection frequency and type upon factors such as the operating conditions, known health of the machines and the farm as a whole, and the average loads.

“Risk-based inspections enable better management of the risk level over the service life, and enable you to have a more cost-efficient inspection regime as well,” Wilkinson says. “You want to decide which components and what aspects of them to inspect, and how to inspect them. So, you can consider a visual examination versus non-destructive testing methods, but also how detailed you want your inspection to be.

“With blades, for example, you can look at these visually from the ground, or with drones, or you can actually send your inspector up close with a cherry picker or rope access and do a much more detailed tap testing to understand what’s happening below the surface.”

Based upon identified risks, quarterly checks on a smaller subset of susceptible turbines may be deemed more appropriate than generic annual inspections of an entire farm.

An approach targeted in this way can reduce costs and limit the need for staff to access hazardous sites unnecessarily, while allowing the quality and resilience of potentially problematic components to be carefully monitored.

Where signs of damage are identified, further inspections can be scheduled and repairs undertaken.

Refurbishment efforts are centred upon the most worn components such as bearings and blades, but may also involve upgrades and retrofits to improve the monitoring capabilities of the turbines. This assists with the ongoing SCADA monitoring of the site – an important tool in diagnosing the health of turbines and their ability to continue operating.

Wilkinson says: “15 years ago, turbines didn’t collect nearly as much data as they do now. And over that intervening period, we have seen turbines that collect a lot more data from different channels, which can tell you more about the actual health of the machine. There are older turbines that only had ten channels recorded, where one might be a temperature signal. Whereas a modern turbine would have hundreds of different sensors and channels, and what’s more it’s being recorded more reliably.”

Operators might latterly have viewed the large volumes of information collected as something of an unwanted challenge, unsure how to store or process it, Wilkinson says, but today these resources are acknowledged as an opportunity to learn, monitor and grow.

Running SCADA condition and performance monitoring on datasets for a wind farm enables a more accurate overview of the health of each turbine and how this varies throughout the array. It can also contribute to risk mitigation.

“Condition monitoring, where you’re able to use that data to predict failures is a really powerful tool,” Wilkinson says.
“It helps you to determine when to do your inspections and it also provides insight into your assessment of the level of risk that should trigger your inspections.

“Nonetheless, it is still a challenge to know exactly when to do so. To put it simply, you have a wiggly trend line
and it starts to go up saying that the component is wearing out – but where exactly on that upwards line do you need to do your inspection? How is that threshold termed, and can you really do that in a quantitative way?

“That’s the challenge. That’s when an experience-based judgement is required, and it’s something that the industry as a whole is getting better at – but we’re not quite there yet. I do think that the quality and volume of the data available is going to help us answer that question. Now we can run trends analysis across multiple turbines, multiple wind farms.”

Alongside SCADA monitoring and inspections, intelligence regarding potential failures and where best to carry out component replacements can also be gleaned from load modelling.

This is particularly relevant to the work Wilkinson carries out at DNV GL. Here, tools historically developed by the company for designing new turbines are now applied to predicting the performance of existing machines and the effects of fatigue as they wear and weather over time. Particularly when coupled with SCADA data recorded on the site, these tools can effectively chart the loads on existing turbines in more detail.

“When you install a turbine, you think you understand what the load is going to be, and what the fatigue is going to be, but that is making a lot of assumptions around what the operating conditions are,” Wilkinson explains. “Actually, when you’ve been operating for ten or 15 years, you’ve also been collecting data, so now you’ve got a really good idea of what the real operating conditions are, and you can run through the model to tell you what the real loads have been. You can then use that to refine and adjust your understanding of the design life.”

This in-depth knowledge will be central to the outcome of life extension projects. While the decision to repower or refurbish ultimately rests upon the regulatory environment and the likelihood of planning consent, the success – or not – in either case will be reliant upon an intelligent approach. With subsidies removed or diminished in many markets in favour of offshore, the winners on land will be those whose alchemy in data can make wind power pay.