A new giant on the skyline

Five out of eleven planned E-126 wind energy converters, the largest in the world, have been completed at the Estinnes, Belgium, site. At 7 MW rated output each has blades 59 m long mounted on a 135 m tower. It takes the world’s largest crawler crane to lift the rotor into place. 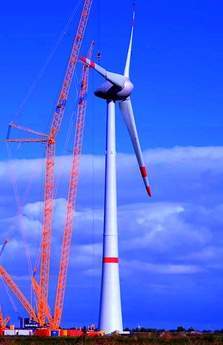 The world’s first wind park to include

7 MW wind turbines, the largest wind units ever put in operation to generate electricity, has been officially opened near Mons, in Belgium. The 11 turbine facility is being co-financed by the European Commission with up to r3.3 million funding from the 7th Framework Programme (FP7), and was formally inaugurated by EU energy Commissioner Andris Piebalgs in a special ceremony arranged by operator Windvision and attended by European Union and Belgian officials on 25 November last year.

‘The E-126 wind turbine comprises the most advanced power electronics in use in the wind sector and is able to provide grid stabilising ancillary services which before were reserved for conventional power plants’ said Andris Piebalgs at the opening. He added: ‘Estinnes is a milestone on our ambitious road to sustainable energy. The E-126 turbine technology and the Estinnes wind farm seem to be one of the most suited and best developed options to further increase the onshore wind power exploitation potential in Europe at a high supply security and at affordable costs’.

‘The world’s largest wind turbine is now the Enercon E-126’ was a claim first made two years ago at the onset of Enercon’s testing of an updated version of its 6 MW E-112. This was in effect the prototype the E-126. It was installed at the company’s test site at Emden, and was being assessed in combination with various forms of energy storage. The rig at Emden also allows tests on grid connection.

At the time it was predicted that a design rating of 7 MW was aimed at and in the event this turned out to be an understatement. The modified E-126 is now rated at 7.5 MW and is suitable for IEC wind class 1 sites with turbulence classes A and B, as well as for wind class 1C. To achieve this, some minor modifications were made. For example, the machine design was adapted to load assumptions for locations with greater turbulence. In addition, the generator cooling system was optimised. The ventilation fans of Enercon wind energy converters are built into the nacelle casing, and their air intake has been modified in such a way that the cooling capacity can be exploited more efficiently.

‘We have tried and proved that we can operate the E-126 safely and with the required reserves even at 7.5 MW rated power,’ says Arno Hildebrand, head of the Construction department at Enercon’s Wobben Research & Development centre in Aurich. A monitoring system supports the control system of the wind turbine. ‘Depending on the location, the WEC control system assesses the loads that occur and mitigates any extremes, for example by pitching the rotor blades or turning the nacelle’.

This E-126 wind turbine is said to include the most advanced power electronics in use in the wind sector and is able to provide grid stabilising ancillary services of a kind usually reserved for conventional power plants. This innovative adoption of power control electronics contributes to improving the performance of the wind energy converter, and also the regulation of active power, voltage, frequency and reactive power in both normal and emergency situations.

The pilot demonstration calls for 11 of these wind turbines to be installed by July 2012, to demonstrate ‘the development of a cost-effective large-scale high-capacity wind park using new state-of-the-art multi-megawatt turbines coupled with innovative technology used to stabilise the grid’ according to the remit established by the plant’s EU funding.

The wind farm is the first large-scale on-shore facility in Belgium and as well as its aim of testing the turbine‘s performance at higher power levels, the site will assess technical issues (network stability and security), financial aspects (cost effectiveness), and environmental issues such as landscape pollution. Better forecasting is expected to improve the cost-effectiveness of the park and the lessons learned at Estinnes will be adapted for application in a different national context, a weak grid system on the island of Cyprus, according to the Commission.

As well as being the largest, this wind turbine is claimed to be among the most efficient available. For a wind park equipped with such turbines the utilisation factor expressed in MW/km² increases by a factor of 2.3 compared to state-of-the-art

To help achieve this kind of performance, surpassing that of the E-112 which is physically similar, this turbine is equipped with a number of new features: an optimised blade design with a spoiler extending down to the hub, a pre-cast concrete base and an elevated hub height.

The E-126 has a directly linked annular generator with no gearbox. The generator is housed at the widest part of the nose cone, and takes up the entire width of the nacelle, to generate power more efficiently, and provide longer service life with less wear.

The generator is of primary importance in the gearless system design of these turbines. Combined with the rotor hub it provides an almost frictionless transfer of energy, while running at a much reduced rotational speed, which produces less mechanical wear of running components such as bearings. It also has fewer moving components, compared to conventional asynchronous generators, all of which helps to adapt it well to a demanding workload and a long service life.

The resulting low-speed asynchronous generator has no direct grid coupling. The output voltage and frequency vary with the speed and are converted for output to the grid by a DC link and inverter. This allows a high degree of speed variability.

In adverse wind, this turbine does not shut right off at a predetermined speed in gusts or very high wind speeds but throttles down by turning the blades slightly away from the wind so as to continue to generate power, though at a lower production rate. When the wind is more favourable, it returns.

To install this 198 m high machine the world’s largest crawler crane was used. This is a 1600 tonne vehicle, developed and constructed especially to raise and position the giant 127 m diameter rotor in a single lift.

Installation of a machine on this scale presented new problems. In November 2009 Enercon installation teams for the first time used the company’s new Terex Demag CC 9800 large-scale crane to hoist an E-126 hub. The hub with its pre-assembled inner blade segments weighs in at 340 tonne. At the working radius required to hoist the hub, the Terex-Demag has a maximum lifting capacity of 360 tonne.

Simply rigging the hub took five hours; lifting it off the centre frame another hour. A smaller crane took care of guiding the hub, making sure the downward-pointing rotor blade did not touch the ground when the hub was tilted. The hoisting itself was completed in 20 minutes. The installation team then spent the remainder of their work day inside the nacelle, bolting rotor and machine house together.

Project manager Sonja Kehmeier is proud that the entire installation process could be completed in just two and a half months, from tower construction to the mounting of the blades. ‘Because the end of the year was close, we were working to a tight deadline: The teams worked in parallel, building the tower, pre-assembling the hub, and preparing the ground equipment for the crane on a dedicated hardstand.’