Statoil’s offshore expertise has enabled it to switch entirely to ROV-friendly solutions, even at diving depths. Kaj-Ove Skartun, the company’s subsea IMR manager, tells James Lawson how developments in automation could spell the end of a need for human intervention in subsea operations. 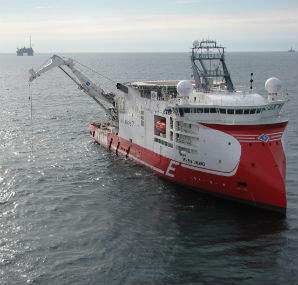 Subsea is truly a Statoil core competence. Starting with its first subsea well at Gullfaks in the North Sea, the company has pushed the boundaries of underwater production for almost 30 years. The world’s largest operator at depths greater than 100m, Statoil is able to deploy complex ‘factories’ on the seabed, like the 1,240t Tordis separation and injection module.

To take care of its Norwegian subsea assets, Statoil has built a dedicated inspection, maintenance and repair (IMR) capability over the last 15 years. Cleaning, visual inspection, light construction and installation, and valve operations are the most common tasks, but IMR handles everything from protective mattress laying to well stimulation and pipeline repair.

Leading-edge technology and efficient organisation ensure that the right equipment and personnel are always available for safe, cost-effective operations. As subsea production assets have changed over the years, so the technology used by IMR has evolved to keep pace.

"In the past, there were manned interventions; now, we have gone completely to ROV-friendly solutions. That is the biggest change."

"In the past, there were manned interventions, at least above 200m," says Kaj-Ove Skartun, manager for Statoil subsea IMR since 2008. "Now, we have gone completely to ROV-friendly solutions, even at diving depths. That is the biggest change."

It follows that work-class and inspection ROVs are indispensible components, supporting all other operations. A growing range of sophisticated systems can be connected to ROVs, better automating light interventions such as turning a valve with a torque tool or carrying out a hot stab.

Since the 1980s, manufacturers have been developing tools and components for subsea use. Running tools can be deployed on a single wireline for delivering and retrieving smaller components, while horizontal and vertical tie-in and connection systems and tools can be used to connect rigid jumpers and spools or flexible flowlines and umbilicals to subsea structures. For larger tools or modular subassemblies like replacement pumps or chokes, a vessel’s module handling system (MHS) positions these above the moon pool, from where they are directed to the subsea structure via multiple guidewires.

Statoil IMR is now in its fourth generation of diverless intervention tools. "In the 1990s, intervention tools were very large and made for special purposes," says Skartun. "Pulling in and connecting a flowline might require changing out a tool midway through a job. Today, the tools are smaller and more versatile – they can carry out multiple operations before recovery."

First-generation tools also used to require a large umbilical of up to 30 lines from the mother vessel. Today, ROVs connect to tools to supply hydraulic and electric power.

"It’s tricky to run an umbilical and it carries a higher risk in rough weather, so that means a much quicker and safer operation," says Skartun.

The fifth and sixth generations of subsea installations have moved away from customisation. To obtain economies of scale, the goal is to build from a restricted menu of proven, standard components.

"The cost of operations is coming much more into focus," says Skartun, who notes that system developments have not always helped IMR. "The second, third and fourth generations were designed to be easy and cost less to install, but it can be difficult to get between the trees or inside the template. The first templates were very big and it’s often easier to manoeuvre our work-class ROVs around them."

Access hatches in overtrawlable structures are one area where standardisation is needed.

"Some hatches work very well but some don’t at all," says Skartun. "The industry could bring down costs by coming up with a standard design and, of course, this applies to all interfaces."

Its ships are the most striking feature of IMR’s modern operations, a far cry from the modified multipurpose service vessels it started out with.

"Skidding tracks used to be large beams on top of the deck," says Skartun. "Now, the skidding system is flush, which makes for a totally different – and safer – regime for deck working."

Using twist-lock sea fastenings to secure containers and modules along with brackets and pallets has reduced the amount of welding required to attach equipment to the deck.

"Now, you can do most of the mobilisation on shore before the vessel comes to the quayside, and lift equipment directly onto a pallet on the skidding track," says Skartun. "Ideally, you would have smart pallets that moved around themselves and did their own sea fastening."

The Edda Fauna was the first vessel purpose built for subsea IMR work. Having entered service in 2008, it has one main and two ROV moon pools, a 100t crane and integrated scale-squeeze equipment to remove scale build-up inside production tubing. Its MHS can launch and recover 60t modules at depths of up to 2,000m.

"With 5m Hs, you have an 85% chance of operating in rough winter conditions. The difference is gigantic."

"The Edda Fauna was a step change in our operations," says Skartun. "Everything is tailor-made for subsea operations on that vessel; everything is active-heave compensated (AHC). The crane can operate in 5m Hs [significant wave height], the [MHS] tower can too, the ROV – everything."

According to Skartun, the latest electrically driven AHC systems are quieter and easier to maintain than hydraulic active-heave compensation, with less potential for oil spills. With the ability to operate in 5m Hs, IMR’s weather window has lengthened significantly.

"With 5m Hs, you have an 85% chance of operating in rough winter conditions," he says. "Economically, the difference is gigantic."

Today, IMR is most likely to wait on weather because of old tooling from 15 or 20 years ago that was not designed to work with AHC. "We are continually looking for business cases where we can either build new tools or alter and recertify existing tools so that they can operate in rougher conditions," says Skartun.

The latest fleet member, the Seven Viking, showcases the state of the art. Built to handle all-year-round, ultra-deepwater subsea IMR operations, the vessel carries 90 personnel in comfort, can cruise at 18kt and is able to work for a month without resupply. Full AHC and Class 2 dynamic positioning means work carries on as normal in 5m Hs and 19m/s wind speeds, with personnel working within its enclosed MHS tower and moon pools.

As well as larger, higher-strength decks, its crane is rated for 135t loads and its MHS copes with the latest 70t modules. Bulwark rails can be removed to better handle these larger modules, while its scale-squeeze pumping system draws from tanks of 900m3.

But even the Seven Viking has its limitations. The biggest module at the football-field-sized Åsgard gas compression unit will weigh over 300t. Statoil has contracted Technip and the North Sea Giant service vessel to install the system in 2015. Boasting a crane rated for 400t loads at depths of up to 3,000m, the vessel may be retained for IMR work through to 2018.

Shell’s vast Ormen Lange gas field, Norway, could offer similar IMR challenges. Shell, Statoil and Aker Solutions are currently working on a pilot subsea system for the field as an alternative to a conventional manned platform.

"There may be cooperation between Statoil and Shell in future for IMR work if they implement sea gas compression at Ormen Lange," says Skartun. "As this technology becomes fully field-proven, we will see a lot more of these projects."

Managing cooperation between multiple stakeholders is something of a speciality for Statoil’s IMR operation, whose efficient mass-production approach nicely matches the subsea factories it maintains. Working as a supplier to internal customers such as the company’s five development and production departments, its IMR job portal gives visibility of all current operations. Tracking and logging the workflows involved, it also acts as a knowledge management system. Holding the sum total of all assignments to date, this is a huge asset in assessing and planning jobs. Satellite links let all relevant staff access the online portal regardless of location.

The portal shows what is being carried by each vessel, its deck layout and what extra equipment may be needed for certain jobs – essential with thousands of different kinds of tools held across seven bases from Hammerfest to Stavanger.

"All kinds of IMR information is on there," says Skartun. "Customers and contractors can see what kind of extra equipment they will need to carry out operations. We can handle around 70% of operations with the standard vessel equipment. That’s another step change."

Statoil is now working on a new offshore network of 4G mobile hubs to enhance communications.

Requesting a new project kicks off with a work instruction, which the IMR team then assesses. Is this a standard operation, is it urgent and do we have the capacity? IMR acts as a "fire brigade" for urgent HSE or production interventions while scheduling less pressing work over longer campaigns.

Risk reduction is designed into all stages of task planning and execution, with numerous measures, standards and systems used in sequence; HAZOP, HIRA, HAZID, Safe Job Analysis and Time Out for Safety are just a few examples.

"We are continually looking for business cases where we can build new tools or alter existing ones so that they can operate in rougher conditions."

Contractors contribute their top three risks at the weekly IMR engineers’ meeting, where jobs with particular risks are highlighted. IMR and its contractors (as well as the rest of Statoil) use DNV’s Synergi system for risk and asset integrity management.

With a date and ship decided on, the job joins the Vessel Plan, which Skartun describes as the "IMR bible". Updated twice weekly in respect of the daily 9am conference, this planning platform helps ensure that each vessel is in the right place at the right time with the right equipment and technical staff on board.

"We try to mobilise for campaigns of ten to 15 jobs at a time; that’s the most efficient," says Skartun.

Long-term, full-service contracts with DeepOcean and Subsea 7 are central enablers of this success, giving easy access to the necessary vessels with specialised equipment. Subsea IMR in Stavanger started up 15 years ago with an 80-day contract for one vessel; prior to that, ships were contracted as required.

"That vessel worked every day in its first year," says Skartun. "Long-term partnerships grow competence and boost HSE performance. We have been able to attract the right people, and this approach has been a great success for IMR and Statoil."

As well as ‘standard’ operations, there’s increasing IMR involvement in work like well cessation and stimulation. Connecting subsea trees is now a standard operation for IMR vessels, and this offers huge savings over mobile rig-based installation.

"For some operations, you might reduce the cost by 80%," says Skartun. "Taking on project work like riser change-outs as well as production operational work helps us achieve high vessel utilisation."

Subsea will be key to future success in the Arctic or in deepwater areas like the Gulf of Mexico and Brazil. With IMR now as much a core competence as the subsea systems themselves, Statoil can be sure its future projects will receive equally sophisticated – and efficient – support.