Prof Weizhong Feng and his colleagues in Shanghai are setting new standards for China's coal plants, with an innovative retrofit concept for 300 MW subcritical units, raising steam temperatures to 600°C, and a radical approach to implementing double reheat in ultrasupercritical units, building on experience at Pingshan II 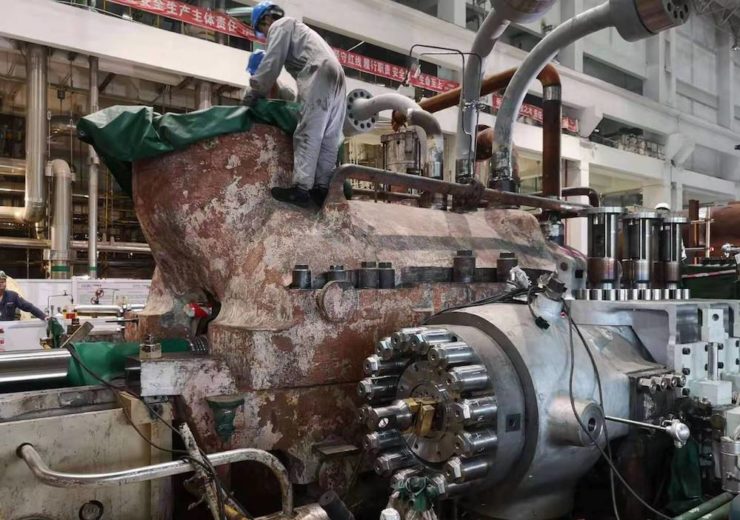 Summer 2019 has seen the commissioning of a retrofitted 300 MW subcritical coal fired unit in China that is expected to be capable of an efficiency of 42.8% (net, LHV basis) – a significant increase from the 38.4% level typical for a 300 MW subcritical unit in China – and achieved by raising the temperature of the main and hot reheat steam from 538°C to 600°C, while keeping the steam pressures unchanged.

The upgraded Xuzhou 3 was successfully synchronised to the grid on 25 July and on 10 August a 168h full load test was completed. After that the unit was operated for over two months, before shutting down in early October in accordance with grid requirements. As of late October, it was due to restart and complete performance testing.

The project was described at Clean Coal Technologies 2019 (Houston, 3-7 June, 2019) in a paper authored by Weizhong Feng and Li Li, and presented by the latter.

Since 2004, China has been replacing small, low efficiency, coal plants with larger, more efficient units, and the “six year action plan”, launched in 2014, has set new annual average efficiency targets that must be achieved by coal plants if they are to remain on the grid: 39.6% (net, LHV) for 300 MW units; and 40.9% for 600 MW units.

Subcritical coal fired units in the 300 MWe size range, about 880 of them, still play an important role in China’s power generation mix, Li noted, accounting for about 350 GWe out of a total coal fired installed capacity of some 1010 GW (which includes 103 ultrasupercritical 1000 MW plants).

For these 300 MW units to achieve the annual average efficiency target of 39.6% specified in the six year plan, their efficiency under rated conditions needs to be higher than 42%, ie, close to the level of ultrasupercritical units, Li argued, “which is challenging.”

Looking at potential retrofit options, as well as achieving this significant increase in efficiency, the retrofit must also be cost effective and achieve high ROI, maintain the increased efficiency over an extended period and entail minimum risk, making use of well proven materials and equipment. The Feng team’s high temperature retrofit meets these requirements, see table below.

The Feng team have been working with Siemens on the steam turbine elements of the upgrade, under an agreement signed with Shanghai Shenergy Power Technology.

As well as increasing the steam temperatures from 538°C to 600°C, the steam turbine upgrade also includes improved control stage, use of advanced blade designs, such as 3DS and 3DV, and additional steam extraction for the A0 high-pressure preheater. Thanks to these improvements and the higher steam temperature, the Siemens steam turbine design promises a heat rate of around 7500 kJ/kWh (7409 kJ/kWh for a new build).

Increasing steam temperature is found to be far preferable to increasing pressure, particularly for the boiler.  “It’s a pressure vessel”, said Li, and altering the pressure would necessitate dismantling and complete rebuild.

Increasing steam temperature to 600°C is “no problem for boiler materials”, said Li. The innovative high temperature modification uses “the original heating surfaces as much as possible while achieving 600°C.” It is also informed by real data on heat transfer. “This is the basis of the retrofit.”

Another feature of the modification is adoption of energy saving measures throughout the plant, with, for example, expansion of the “regenerative medium from just feedwater to water, air and coal”, part of the 4E concept so successfully applied at Waigaoqiao 3.

Other 4E improvements incorporated in the high temperature retrofit include measures to deal with solid particle erosion, which “has troubled the global power industry for decades” and is a particularly serious issue for supercritical and ultrasupercritical units, exacerbated by higher operating temperatures. If not addressed, the “remarkable efficiency improvement will be consumed”, said Li. Measures against SPE employed with spectacular success at Waigaoqiao 3 – with turbine blading completely free of solid particle erosion after more than 60 months operation – are included as part of the high temperature retrofit.

Overall, as shown in the table, the Feng team’s high temperature retrofit is expected to increase the efficiency (net, LHV) of a typical Chinese 300 MW subcritical unit to 42.3% or more – 42.8% in the case of Xuzhou – at a cost of about $50 million. The efficiencies anticipated exceed those of supercritical units, and even some ultrasupercritical plants, Li observed.

The contract for the high temperature retrofit at Xuzhou 3 (320 MWe, 16.7 MPa/538°C/538°C), was signed in April 2017 and construction started in December 2018. As well as increasing efficiency, reducing coal consumption to about 287 g/kWh, the upgrade will reduce power plant emissions by more than 10% and extend turbine overhaul interval from six to 12 years.

Despite the wide scope of the retrofit, “the boiler is still a drum boiler, and the turbine still has a governing stage, resulting in good load response characteristics”, said Li, and also it is “friendly to the operators of the unit.”

As well as the high temperature retrofit outlined above, Professor Feng and his team are also working on novel and more economic ways of implementing double reheat in new ultrasupercritical coal fired plants, as outlined in a second Weizhong/Li paper at CCT 2019, also presented by Li Li.

The first project to use the concept, employing a split level, or partially elevated, steam turbine, with two generators, in a twin shaft configuration, is under construction at Pingshan Phase II. The LP1, LP2, LP3 + IP2 stages (plus generator) are at a “conventional” elevation, 17 m, while the IP1 + HP (driving a second generator) are raised to an elevation of 80 m.

Pingshan Phase II, described as a “national demonstration project”, combining the Feng double reheat arrangement along with other improvements (comprising the Feng ‘5E’ suite of technologies) is expected to be the world’s most efficient coal fired plant when it enters service in 2020. At 1350 MWe, it will also be the largest in terms of unit size.

In addition, it will be the first deployment of GE’s SteamH boiler design, with key components such as mills, burners, water wall components, superheaters and reheaters, being manufactured in partnership Shanghai Electric at GE’s (formerly Alstom’s) state of art Wuhan boiler factory in China.

But, not content with that, the Feng team are now working on an even more efficient plant with a fully elevated steam turbine generator, with one shaft. “Pingshan II is good, but not perfect”, said Li.

A capacity of 1350 MWe is “somehow too large for a single unit”, he suggested, “making it difficult to promote more projects.”

Also, there is still lengthy hot second reheat pipework, with its associated pressure and heat losses. This could be problematic for any future 700°C project, requiring a significant quantity of expensive alloys.

Furthermore, the two-shaft configuration is more complicated to control and operate than a single shaft, and the smaller rotational inertia of the elevated, smaller, turbine creates challenges for overspeed protection, according to Li.

He said there was “no problem” with the feasibility of the “all-casings-elevated” concept.

Condensers remain at the conventional level, connected to the elevated LP stages via ducts similar to those that are well established for air cooled units, with negligible pressure loss (10 Pa).

Unit capacity is 660 MWe (a good size for China and elsewhere) and this can be achieved with five casings (1HP + 1IP1 + 1IP2 + 2LP), which can be accommodated on a single (elevated) shaft.

Design work is currently underway on the first planned plant to use the “all-casings-elevated” configuration, combined with the latest versions of the Feng 4E technologies. This is China Resources’ 2 x 660 MW Fuyang Phase II, with construction scheduled to start next year.