With 2020 marking the 10th anniversary of the Deepwater Horizon explosion in the Gulf of Mexico, the American Petroleum Institute is working to create a safer offshore oil and gas industry across the globe 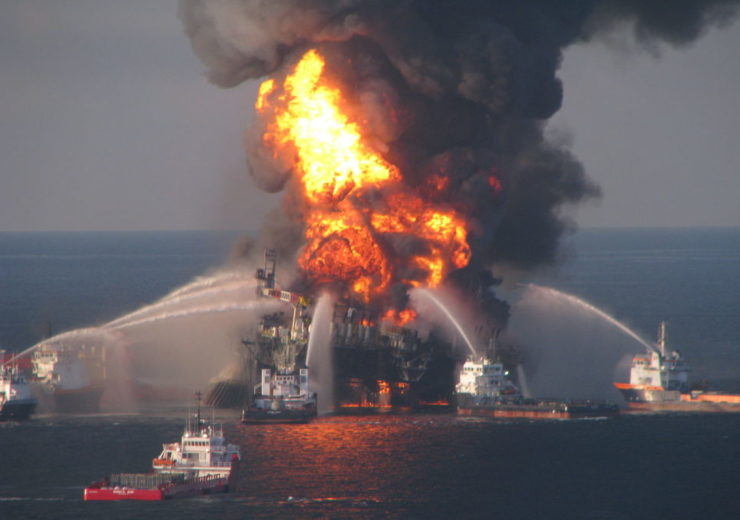 Deepwater Horizon is regarded as the largest marine oil spill in history, after flooding about 68,000 square miles in the Gulf of Mexico and killing 11 (Credit: Wikimedia Commons/US Coast Guard)

The American Petroleum Institute recently published the fourth edition of ‘Recommended Practice 75’ (RP 75), its offshore oil and gas safety standard. More global in its scope, and with a renewed emphasis on responsible corporate leadership, it is hoped the standard will impact on business practices, as Alexa Burr, the organisation’s director of system programmes, tells Ross Davies.

This April will mark the 10th anniversary of the Deepwater Horizon explosion in the Gulf of Mexico – to date, the worst offshore oil spill in US history.

The blast, which discharged millions of barrels of oil from BP’s Macondo well into the sea, is commonly described as an environmental catastrophe, the resulting spill devastating surrounding ecosystems and wildlife.

What must not be forgotten is that it also killed 11 workers and left 17 with serious injuries. A decade on, and numerous lawsuits later, it remains one of the darkest chapters in the history of the offshore oil and gas industry.

A subsequent investigation conducted by a US presidential commission the following year was unsparing in its conclusions. The disaster, its final report claimed, was indicative of the failings of “the safety culture of the entire industry”.

The report, published in January 2011, added that, “Deep water energy exploration and production, particularly at the frontiers of experience, involve risks for which neither industry nor government has been adequately prepared, but for which they can and must be prepared in the future.”

During the investigation, the American Petroleum Institute (API), the industry’s lone trade association, made the unprecedented move of making all of its safety standards available for public viewing, at no charge (most documents ordinarily cost upwards of $150).

Explaining the rationale behind the decision, then-president and CEO Jack Gerard claimed the public had a right to know what safety and environmental measures were in place on the nation’s rigs.

As is the case with any disaster or tragedy, lessons must be learned to prevent a repeat occurrence. Transparency is often a good place to start. With this in mind, the API also launched the Center for Offshore Safety (COS) in early 2011. The centre’s mission statement includes the promotion of “the highest level of safety” through “leadership and effective management systems”.

Based in Houston, Texas, the COS was set up by API member companies, including the likes of BP, ExxonMobil and Total, as well as drilling contractors and service and equipment providers, such as Baker Hughes and Halliburton. The addition of the latter company was especially prescient since the Houston-based oil giant shouldered part of the blame for the Gulf of Mexico spill due to flaws discovered in cement it supplied to the rig.

Members are encouraged to develop new safety programmes, which are then assessed by third-party auditors every year. This also includes working alongside the Bureau of Safety and Environmental Enforcement (BSEE), a US government agency also set up in the wake of the Deepwater Horizon spill, which is in charge of improving safety measures across the industry.

As the nation’s largest oil and gas trade association, API has also sought to lead the way on safety through its recommended practice (RP) standard. In December, the group published the fourth edition of API RP 75, which guides the establishment, implementation, maintenance and improvement of safety and environmental management systems (SEMS) for offshore operations.

COS is instrumental in working with members of the offshore oil and gas industry in the implementation of RP 75. Several areas in the new edition have been updated – not least in its geographical scope. Previously focused only on domestic operations in the US outer continental shelf, the standard has now been extended for global use.

“Offshore safety and environmental protection does not have boundaries,” says Alexa Burr, API’s director of system programmes. “While previous versions of RP 75 were and could be applicable globally, the fourth edition takes into consideration lessons learned from different jurisdictions.

“In the energy sector, industry standards have played a critical role in the development and spread of technologies and products used around the world every day to enhance environmental, health, safety, and sustainability performance – including RP 75.”
This is in keeping with recent efforts made by the API to more closely align with global companies and regulatory agencies. In 2019 – its centenary year – it signed a memorandum of understanding with the UK-based International Association of Oil and Gas Producers to establish a stronger partnership and share safety practices.

“As the global markets for exploration and production, goods and services increases, we have increased our collaboration with these players to further technical cooperation and adoption of API standards to drive global improvements in performance,” says Burr.

“That said, while many of API’s standards are used by API members globally, national standards-developing organisations and regulators often develop competing or duplicative regulations applicable to the oil and natural gas industry. This can create inefficiencies and divergences that result in unnecessary barriers and reduced economic competitiveness.”

The new edition also guides how companies should interface with each other, to ensure operational risks are managed appropriately, with safety and environmental protection maintained. This is especially pertinent, given the Macondo disaster was essentially blamed on poor communications between BP, Halliburton and rig operator Transocean.

Elsewhere, it has expanded the criteria of operations that fall under SEMS risk management expectations, giving greater consideration to human performance. The standard has also been restructured to encourage utilisation by contractors and subcontractors, while including advancements in technology, operations and overall knowledge.

“The purpose of SEMS is to enhance the safety of operations by reducing the frequency and severity of accidents,” explains Burr.

According to Burr, RP 75 is “a proactive, risk-based performance approach that outlines the various key elements for inclusion in an effective SEMS programme”. This includes the “completion of a thorough hazards analysis” and the implementation of “effective management of change procedures”.

Burr also maintains that operational integrity, safety and environmental protection have “always been core values for API member companies – and always will be”. But what of this year’s unhappy 10th anniversary? Did the Deepwater Horizon spill bring about a change of culture in the oil and gas industry, as it was ordered to do so? Just how aware are today’s operators of their safety obligations?

“Lessons learned from the incident 10 years ago changed the industry for the better. The industry developed capabilities to further advance both prevention and response,” she responds. “As with any event, to protect against the possibility of major incidents repeating in other segments, there is a sustained and steady focus on what has been learned, and continuous management of risk. The use of RP 75, and a safety and environmental management system, helps offshore operators ensure they are constantly evaluating and addressing risks and, ultimately, continuously improving performance.”

The hope is that the updated standard will not only inform offshore operators’ business practices, but also shape their approach to duty of care for staff and personnel. RP 75, says Burr, manages safety “with the same principles of planning, organisation, implementation and investigation that are in all other business functions”. SEMS also includes “process, personnel and all safety programmes”, she points out.

“Rule and inspection-based systems are also important, but RP 75 helps to address the safety management system issues also seen during incidents,” adds Burr. “We also recommend that there is a focus on systems and culture, in addition to compliance. Human factors, such as vigilance and leadership, are important too. Technology can be used for the likes of procedures, alerts, data-tracking and remote leak detection.”

In the aftermath of the events of April 2010, the offshore oil and gas industry was urged to think long and hard about its risk and safety policies. What should ultimately underpin operations – irrespective of whether they fall under the remit of majors, rig operators or equipment providers – is rigour. If RP 75 can reinforce this, it can only be a good thing.

This article originally appeared in Issue 1, 2020, of World Expro. The full issue can be viewed here.