Despite boosting the country's energy output by 85%, Ethiopia's Gibe III dam has left an indelibly negative mark on the thousands of indigenous people living along the Omo River 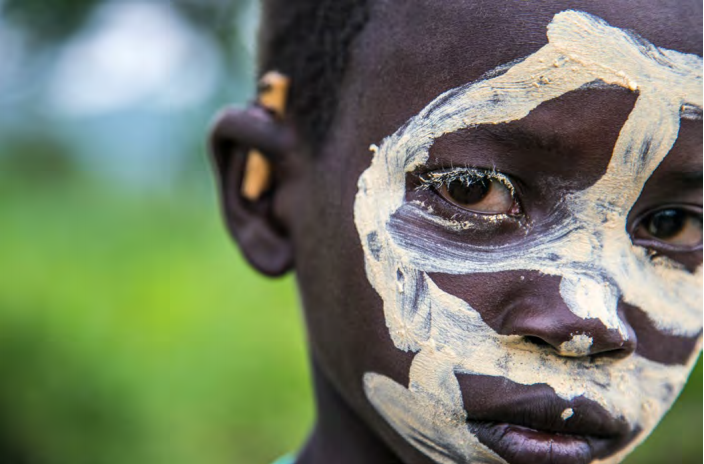 A suri boy with traditional face painting in the Kibish region of the Omo Valley (Credit: Kelly Fogel/Oakland Institute)

Set against the monolithic backdrop of Africa’s largest dam, Gibe III, the myriad indigenous populations of Ethiopia have been saddled with an austere ultimatum over the past decade: “Abandon your way of life and stay in your homeland, or keep it and leave.”

Sold by the country’s government and Italian construction firm Salini Impregilo on its ostensible potential to provide a boon for any and all in the Lower Omo Valley, the dam has proven far more discriminate in apportioning its benefits.

Robbing local groups like the Mursi and Kwegu of the water flow critical to their aquatic form of agriculture, its actual purpose has been revealed through empirical evidence as the facilitation of large-scale, irrigation-reliant sugarcane plantations downstream.

The Kuraz Sugar Development Project (KSDP), too, came with a promise that it would enrich the lives of its neighbours with an abundance of jobs which has also long since been broken, as the vast majority of work has gone to workers from other regions.

“Over the past year, the country, now led by Prime Minister Dr Abiy Ahmed, has gone through tremendous changes starting with the release of thousands of political prisoners, including Indigenous leaders and activists,” said Anuradha Mittal, executive director of the Oakland Institute—a US-based think tank whose recent report details the Gibe III and KSDP sagas.

“Change, however, has not reached the Bodi, Mursi and Kwegu communities of Lower Omo—many of whom were forcibly evicted under the previous regime to make way for the construction of the Gibe III Dam and sugarcane plantations—and today face loss of livelihoods, starvation, and violent conflict.”

What is the Gibe III dam?

In 1996, plans for Gibe III were drawn up as part of the African Development Bank’s Omo-Gibe Masterplan—a comprehensive framework for the management of land and water along Southern Ethiopia’s Omo river.

Construction on the facility did not begin until a decade later and was not finished until early 2015, which marked the filling of the river’s reservoir and the end of its annual flood, destabilising a core pillar of the indigenous economy.

For the country’s government, though, the project has been a remarkable success.

The dam provides strident energy production to the tune of 6,500GWh a year, in addition to enabling the efficient operation of sugar plantations downstream, whose vulnerable irrigation infrastructure is now safeguarded from floods.

Making clear his vision for what Gibe III would mean for Ethiopia, then-Prime Minister Meles Zenawi said a 2011 announcement: “In the coming five years there will be a very big irrigation project and related agricultural development in this zone.

“I promise you that, even though this area is known as backward in terms of civilization, it will become an example of rapid development.”

Work on the KSDP began shortly after Mr Zenawi’s statement, when Metals and Engineering Corporation (MetEC), a construction firm run by the military, was contracted to build Omo Kuraz I, the first in the project’s extensive portfolio.

“How they tricked us”

According to the Oakland Institute, the damages caused by the Gibe III dam are profound.

Three years after the facility was completed and seven years after the adjacent sugar plantations were finished, field work has reportedly confirmed many in the region are suffering from acute hunger, particularly the Mursi.

This group, who number roughly 7,000, rely on the regularly-fertilised soil along the banks of the Omo river for their livelihood, but are now forced to scratch out an existence on the plains, their cattle being their only form of sustenance.

They were promised irrigated land on one of the various government-established resettlement sites, but the 0.25 hectares each household was allotted has since proved insufficient to feed the displaced families.

At one such site, one of the Mursi’s plots of cultivated maize was seized along with the surrounding area, all of which was subsequently rebuilt as an additional sugarcane plantation.

“That’s how they tricked us,” an anonymous member of the Mursi told the Oakland Institute.

“They took the Omo River waters and channeled them. They then divided out cultivation sites for the Mursi and poured water on the land. The corn ripened.

“‘This is very good,’ we said. When we wanted to plant again they bulldozed the crops.

“‘The land will be cultivated by its owner – the government,’ said the officials.”

A way of life lost

The Bodi, another indigenous group living in rural Ethiopia of roughly 5,500, has meanwhile been pressured to either sell their cattle and abandon their way of life in favour of relocating to the resettlement sites.

“‘Sell all your cows for money,’ said the government,” an anonymous source said.

“You will become our servants.’

“The Mursi say ‘if we go into the resettlement site, how are we going to herd our cattle?’

“The government says ‘leave pastoralism behind and go to the resettlement site’.”

The group has since abandoned the resettlement site proffered by the government, arguing the irrigation systems were not functional enough to facilitate a genuine living, leaving them without water for cultivation or personal use.

Like the Bodi, the Northern Kwegu have been forced to relinquish their territory after its forests were cut down and the land was re-purposed for more sugarcane facilities.

Without the regular floods from the Omo River, the 2,000-strong group lost their method for harvesting crops, but refused to live in the resettlement sites owing to ill treatment by the government.

Countless other stories such as those of the Bodi, Mursi and Kwegu paint a picture of obstinate displacement and dispossession, with the government happy to reap the benefits of Gibe III with little to no regard for creating a viable alternative existence for those haplessly trying to build one in its long shadow.