The Coburn deposit was discovered in 2000 while a bankable feasibility study (BFS) was completed in December 2004.

Although a definitive feasibility study (DFS) for the project was released in January 2010,  it later underwent changes and revisions with an update for the DFS released in April 2019, followed by an updated DFS financial evaluation in June 2020.

The key contracts were awarded in the second half of 2020 and the project is estimated to require a pre-capital investment of approximately £143m (A$257m).

The Amy Zone has three phases of sand dune formation with the earliest phase occurring as a sheet-like deposit over the basement. The second phase occurs in the southern end as buried palaeosurface marked by elevated slimes levels. A north-northeast striking ridge from the second phase gives way to the third dune phase which continues to the north.

The Amy Zone is composed mainly of aeolian sands deposited over a Cretaceous basement of clays, clayey sands, and limestone which is uniform with all the three dune formations. The Amy deposit is a large northerly trending dune-hosted mineralisation zone with a total strike length of approximately 35 km.

The proven and probable mineral reserves at the Amy South Zone were estimated to be approximately 523 million tonnes (Mt) grading 1.11% total heavy minerals.

The mining activities at the Coburn mineral sands project are currently focussed on the Amy South Zone, while an expansion to incorporate the northern zone is also potentially viable which is expected to increase the mine life by additional 15 years.

The Coburn project will utilise conventional open-pit dry mining methods based on free-digging of the unconsolidated sand without requiring any drilling or blasting. The mining fleet will comprise dozers and excavators.

The waste stripping will be done with a dozer or scraper while the overburden removal will be carried out by large capacity bulldozers.

The pit slope design is proposed at 34 degrees and the average waste-to-ore strip ratio is estimated to be 0.7. The average depth and the maximum depth of the pit are estimated to be approximately 23m and 62m.

The run-of-the-mine (ROM) ore will undergo processing in a wet concentration plant (WCP) at an average rate of 3,000 tonnes per hour (tph). The WCP will produce a high-grade (95%) heavy mineral concentrate (HMC) through multiple stages of high-efficiency gravity separation and classification processes.

The HMC will be transported to a mineral separation plant (MSP) for the production of premium zircon, zircon concentrate, chloride-grade ilmenite, and rutile products.

The final products will be trucked to the Port of Geraldton for export. Geraldton is an established bulk mineral sands export port located approximately 240km south of the Coburn mineral sands project site.

Strandline will use the Geraldton Port facilities for exporting the products from the Coburn project under a joint cooperation agreement signed with Mid-West Ports Authority (MWPA), Western Australia.

Strandline Resources completed off-take agreements with Industrie Bitossi for premium zircon, Sanxiang-Nanjing for zircon concentrate, and Chemours for ilmenite as of June 2020.

In July 2020, it signed another off-take agreement with Chilches Materials for the supply of up to 7,000 tonnes per annum (tpa) of premium zircon during the first five years of production.

The project area is accessible via a 43.5km sealed road from the North West Coastal Highway (NWCH) located to the east. The access road is planned for an upgrade to incorporate triple road trains with 103t payloads.

A high-density polyethylene (HDPE) lined 5,000m³ settling pond along with an interconnected 10,000m³ process water pond will be constructed at the wet concentration plant (WCP) site, while a 30,000m³ raw water pond is planned at the mineral separation plant (MSP) site.

A permanent 200 personnel accommodation village will be constructed approximately 2.5km south of the MSP facility.

The power supply required for the project is planned to be met through an on-site hybrid gas and renewable energy power station near the MSP facility.

The power station will integrate a natural gas-fuelled generation facility with a state-of-the-art solar and battery storage facility for a combined power generation capacity of 32MW.

Piacentini & Son (Piacentini) was awarded a major equipment supply contract for three in-pit dozer mining units for the project in the same month.

Contract Power was selected as the preferred contractor for the hybrid power generation facility for the project under a build, own, and operate basis in November 2020.

The LNG supply contract for the power facility was also awarded to a joint venture between Woodside Energy and EDL LNG Fuel in the same month.

Macmahon Contractors was awarded the road access and bulk earthworks contract for the Coburn mineral sands project in August 2020. 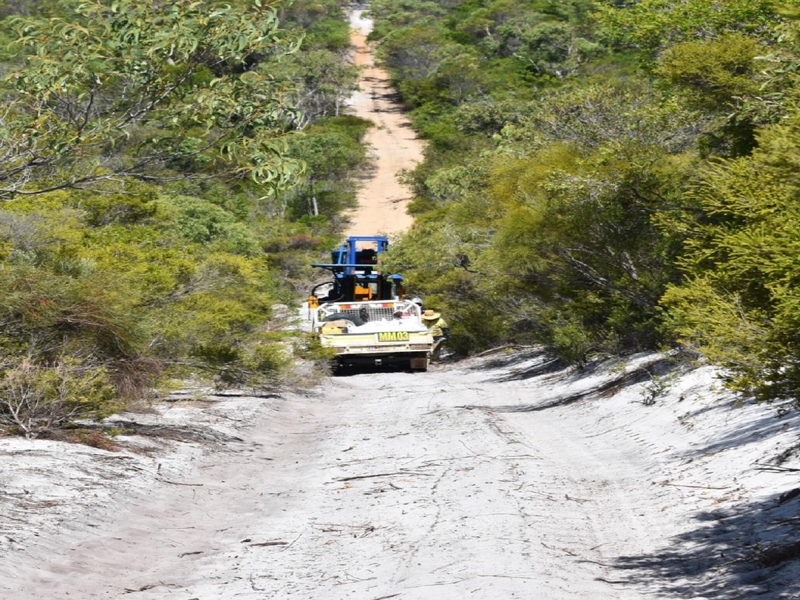