Voith Siemens Hydro Power Generation has announced that it will provide technology for the first wave power station in Germany. 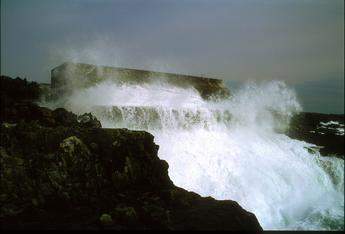 Voith Siemens Hydro, through its subsidiary company Wavegen, is currently operating the Limpet wave power station on the Scottish Isle of Islay. This 500kW project is the first commercial scale grid-connected wave power station in the world, supplying energy for private households.

Limpet utilises the principle of oscillating water columns (OWEC) which has been developed by Wavegen. According to this technique, a chamber is constructed to enclose an area of water. Within the chamber the water column is oscillating, raising and falling due to the wave motion, and thus compresses/de-compresses the enclosed volume of air. The energy generated from this pressure differential is with the aid of a wells turbine and a generator transformed into electricity and fed into the grid.

The new project in Germany will be based on this technology and will have an envisaged nominal capacity of up to 250kW, resulting in annual electricity generation of 400MWh.