Tokyo Electric Power Company (Tepco) says installation has been completed of the equipment required to construct an underground wall of frozen soil around the damaged Fukushima Daiichi reactors to prevent groundwater entering the reactor buildings. 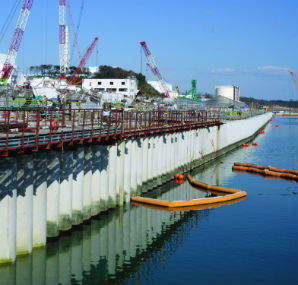 Tokyo Electric Power Company (Tepco) says installation has been completed of the equipment required to construct an underground wall of frozen soil around the damaged Fukushima Daiichi reactors to prevent groundwater entering the reactor buildings.

Work will begin following approval from the Nuclear Regulation Authority (NRA). Ice wall technology is widely used in civil engineering projects, such as the construction of tunnels near waterways, but not on the scale planned at Fukushima. Small-scale tests using the technology have already been completed at the site.

Installation of the equipment began in June 2014 and a test under way since April 2015 has involved circulating the chilling liquid to specific parts of the wall. The north, south and west sides of the facility were completed last September, while the remaining pipes on the east side facing the sea were placed in the ground in November.

Tepco says NRA’s approval will partly depend on the company "showing a method to ensure that the wall (and other groundwater pumping operations) do not invert the water level difference in any way that would cause contaminated water to flow out of the building’s basements".

Leading contractor Kajima Corporation has drilled holes 30-35 metres into the ground and inserted pipes through which refrigerant will be then be pumped to freeze the soil surrounding the pumps. In total, 1,550 pipes have been placed in the ground to create a 1.5km-long ice wall around units 1 to 4. The wall is designed to remain effective for up to two months in the event of a loss of power. The government is funding the project. which is estimated to cost some JPY32bn ($278m).

Currently it is estimated that more than 400t of groundwater enters the reactor basements each day through cable and pipe penetrations as well as small cracks, mixing with the heavily contaminated water previously used to cool the damaged reactor cores.