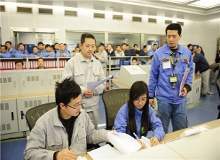 Construction oficially started on Hongyanhe unit 1 in Liaoning province on 18 August 2007 and the reactor achieved first criticality on 16 January 2013.

China Guangdong Nuclear Power Company (CGNPC), which is building the Hongyanhe nuclear power station with China Power Investment Corporation (CPI) said in a statement that compared with the same scale thermal power plant, Hongyanhe 1 is equivalent to an annual reduction in coal consumption of 10 million tons as well as 24 million tons of carbon dioxide, 230,000 tons of sulfur dioxide emissions and 150,000 tons of NOx emissions.

Four units are ultimately planned for Hongyanhe, all currently under construction and due for completion by 2015.

The electricity generated from those four 1080 MW plants would be around 30TWh, which was more than the total electricity consumption of Dalian City, 110km away, CGNPC said.

The start-up of Hongyanhe 1 is significant in that it is the first new nuclear power plant to start up in China since the Fukushima Daiichi accident in Japan in March 2011.