Evolution Mining has announced that its Cowal Gold Operation (Cowal) near West Wyalong in NSW has been granted regulatory approval to commence construction of the Galway-Regal-E46 (GRE46) exploration decline. 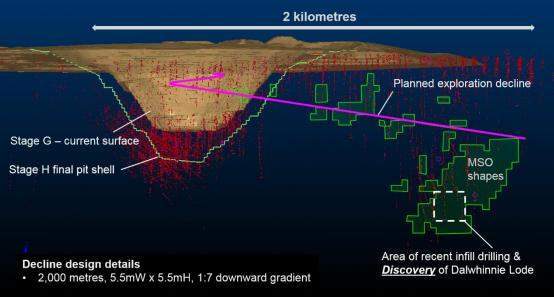 The approval has been given by the NSW Department of Planning and Environment (DP&E).

The decline will allow Evolution to conduct further resource definition and discovery drilling following the announcement in April 2018 of a maiden GRE46 underground Mineral Resource of 5.90Mt at 3.17g/t for 603,000 ounces of gold. It will also facilitate further drilling and delineation of the recently discovered high grade Dalwhinnie Lode.

Development is expected to commence early in the March 2019 quarter and will involve capital expenditure of approximately A$20 – A$22 million over FY19 and FY20. A further investment in underground drilling of A$6 – A$7 million is expected to be spent on an initial 36,000m drill program.

Commenting on the approval, Evolution’s VP Discovery and Chief Geologist, Glen Masterman, said: “This is another important step towards achieving our objective of increasing Cowal’s production rate to over 300,000 ounces per annum on a sustainable basis. As indicated by recent drilling results, we are excited about the potential to add significant underground resources of high grade material over a long strike length.”