Endeavour increases its stake in the Fetekro project

The current 15,000 meter drilling campaign is expected to be completed with the aim of further extending the Fetekro resource and testing nearby targets, including Lafigué Sud 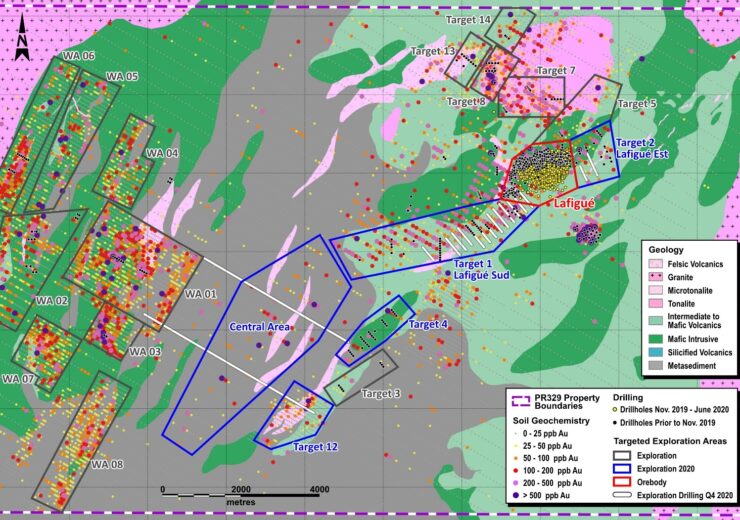 Endeavour Mining  is pleased to announce that it has increased its stake in the Fetekro Project in Côte d’Ivoire, ahead of a Pre-Feasibility Study (“PFS”) which is due to be published in Q1-2021.

Under the terms of the agreement, once the mining permit is granted, Endeavour will be entitled to an 80% stake in the Fetekro Project, compared to 65% currently, while SODEMI (the state-owned mining company) and the Government of Côte d’Ivoire will each have a 10% stake. Endeavour will retain the full ownership of the Fetekro exploration license until such time as it is converted into a mining license.

Sébastien de Montessus, President and CEO, commented: “We are delighted to have concluded this agreement with our long-standing government partners, in a manner which allows all stakeholders to benefit from the value we expect to continue to unlock at Fetekro.

We believe that we have the opportunity to develop Fetekro into a cornerstone asset for Endeavour, which we define as assets with the potential to produce more than 200,000 ounces per annum over 10 years at low AISC. Fetekro has significant exploration potential, an already defined large-scale deposit with straightforward metallurgy and high gold recovery. It also benefits from being located close to existing infrastructure and requires only minimal relocation. We are eager to complete the PFS, which is expected to build on the PEA we recently published based on only half of the current resource, to demonstrate further the robust economics of the project.”

Endeavour acquired the additional stake from SODEMI for a consideration of $19 million plus contingent payments of $3 per ounce for future Proven and Probable reserves defined outside of the existing Measured and Indicated resource boundary. The contingent payment is based on a gold price of $1,450 per ounce and will be adjusted upwards or downwards in a linear relationship with the gold price.

Located in north-central Côte d’Ivoire, within the northern end of the Oumé-Fetekro Greenstone Belt, the Fetekro Project is approximately 500km from Abidjan and close to existing infrastructure, including sealed roads and grid power.

Endeavour began exploration at Fetekro in March 2017, with the Lafigué deposit as the primary target. A maiden resource for Lafigué was published on October 29, 2018 and was updated on September 3, 2019 and again on August 18, 2020. As shown in Table 1 below, the latest resource update resulted in a 108% increase in Indicated resources to 2.5Moz at an average grade of 2.40 g/t Au.

Mineral Reserve Estimates follow the Canadian Institute of Mining, Metallurgy and Petroleum (“CIM”) definitions standards for mineral resources and reserves and have been completed in accordance with the Standards of Disclosure for Mineral Projects as defined by National Instrument 43-101. Reported tonnage and grade figures have been rounded from raw estimates to reflect the relative accuracy of the estimate. Minor variations may occur during the addition of rounded numbers. Mineral Resources that are not Mineral Reserves do not have demonstrated economic viability. Resources were constrained by MII Pit Shell and based on a cut-off of 0.5 g/t Au. For further details, please refer to Endeavour’s press release dated August 18, 2020, available on its website and on SEDAR under its profile.

A Preliminary Economic Assessment (“PEA”), based on the previous 1.2Moz Indicated resource, was published on August 18, 2020 and demonstrated robust project economics.

For further information, please refer to Endeavour’s press release dated August 18, 2020, available on its website and on SEDAR under its profile.

A PFS is expected to be published in Q1-2021 and will be based on the updated 2.5Moz Indicated resource and will define a production scenario based on a 3.0Mtpa mill throughput (compared to 1.5Mtpa for the PEA). Given its strong exploration potential, Endeavour believes that Fetekro has the potential to become a cornerstone asset with a production target of +200koz per annum over 10 years at a low AISC.

To date, only a small portion of the Fetekro property has been explored, as the priority has been the Lafigué deposit, which remains open at depth and along strike. Several additional exploration targets have been identified within 10km from Lafigué, which have had limited drilling of just 7,050 meters, as shown in Figure 1 below.

The current 15,000 meter drilling campaign is expected to be completed during Q4-2020, with the aim of further extending the Fetekro resource and testing nearby targets, including Lafigué Sud.

The scientific and technical content of this news release has been reviewed, verified and compiled by Silvia Bottero, Professional Natural Scientist, VP Exploration Côte d’Ivoire for Endeavour. Silvia Bottero has more than 18 years of mineral exploration and mining experience and is a “Qualified Person” as defined by National Instrument 43-101 – Standards of Disclosure for Mineral Projects (“NI 43-101”).