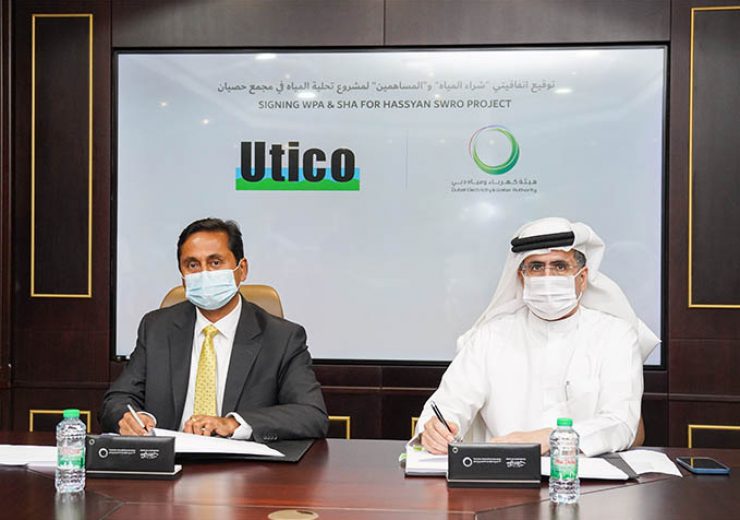 Dubai Electricity and Water Authority (DEWA) has today signed a 35-year Water Purchase Agreement (WPA) and the Shareholder Agreement (SHA) for the Hassyan Sea Water Reverse Osmosis (SWRO) Plant, with Emirati company Utico. The 120 Million Imperial Gallons per Day (MIGD) project will be built using the Independent Water Producer (IWP) model. It is expected to be completed by March 2024 at a total cost of USD 410 million (around AED 1.5 billion).

The agreements were signed by HE Saeed Mohammed Al Tayer, MD & CEO of DEWA, and Ivan Richard Menezes, Managing Director of Utico. Rashed Mehran Al Blooshi, Chairman of Utico and a number of DEWA officials were present.

“We are pleased to sign the Water Purchase Agreement and the Shareholder Agreement for the Hassyan Sea Water Reverse Osmosis Plant, with Utico. This project supports the vision of His Highness Sheikh Mohammed bin Rashid Al Maktoum, Vice President and Prime Minister of the UAE and Ruler of Dubai, to promote the sustainable development of Dubai. It also supports the Dubai Clean Energy Strategy 2050, launched by His Highness, to provide 75% of Dubai’s total power capacity from clean energy sources by 2050. In Dubai, we have a comprehensive approach to ensure the sustainability of water resources in line with the Dubai Integrated Water Resource Management Strategy, which focuses on enhancing water resources, rationalising water consumption, and using cutting-edge technologies and innovative solutions to reduce water consumption by 30% by 2030,” said Al Tayer.

“This key project supports DEWA’s strategy to engage the private sector in developing innovations that enhance water supplies and improve the efficiency and quality of water services. We work to increase the production capacity of desalinated water to meet the growing demand, with the aim of reaching 750 MIGD of desalinated water, compared to the current 470 MIGD. The project also supports DEWA’s strategy to promote Sea Water Reverse Osmosis, as it consumes less energy compared to Multi-Stage Flash (MSF) plants. We aim to produce 100% of desalinated water using a mix of clean energy and waste heat by 2030,” added Al Tayer.

Al Tayer noted that DEWA achieved a world record for the lowest levelised water tariff of 0.277 USD per cubic meter for this project, which is DEWA’s first IWP project. It builds on the great success DEWA achieved in the Independent Power Producer (IPP) model projects at the Mohammed bin Rashid Al Maktoum Solar Park, which is the largest single-site solar park in the world. Through this model, DEWA received the lowest global solar energy prices five consecutive times, making Dubai a global benchmark for solar energy prices.

Al Tayer said that he trusts that Utico’s team will do their best to implement the project according to the highest standards of efficiency, reliability, safety, and security and within the time frame.

“Utico is honoured to be chosen as partner to DEWA for its first IWP desalination plant. Utico, as a UAE company and the largest IWP developer, is confident of delivering this development to the satisfaction of DEWA and all its stakeholders. We thank DEWA’s leadership for their belief and trust in us. Utico’s shareholders and the Board believe that we will deliver this project as the most sustainable desalination plant in the UAE with the world’s lowest tariff,” said Rashed Mehran Al Blooshi, Chairman of Utico.