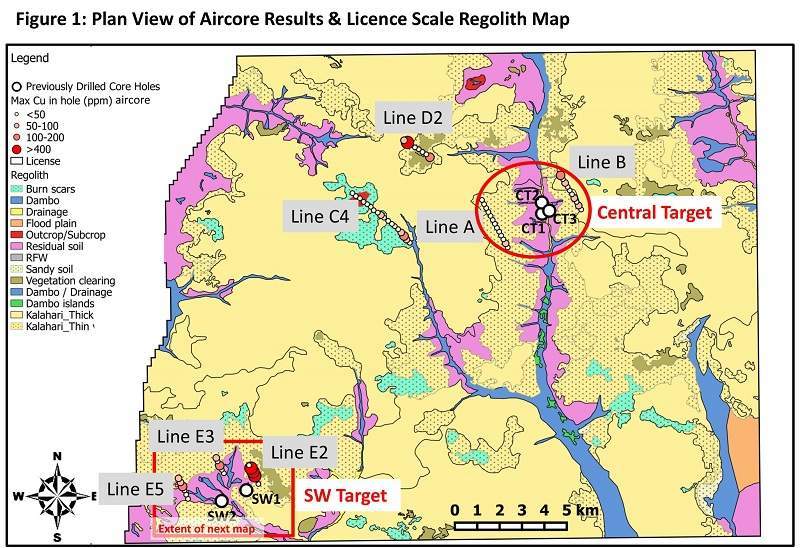 A Phase 2 aircore program is already underway and will include infill aircore drilling of priority targets generated from Phase 1 drilling, and the initial testing of other compelling regional targets on the Pangeni property.

The infill aircore drilling should improve definition of the current priority copper anomalies returned in Phase 1 for further exploration testing in the 2019 field season. The Phase 1 aircore results indicate both the efficient nature of the exploration approach to testing of the Pangeni Project and the thin to moderate (average approximately 25 metres) thickness of the Kalahari cover units.

This program has importantly identified significant copper anomalies below the cover units within a previously largely untested region of potential extensions to the Zambian Copperbelt.

BeMetals president, CEO and director John Wilton said:  said, “We are encouraged by the results from the Phase 1 aircore drilling program at the Pangeni Project where the Company is targeting tier one scale copper deposits. Consecutive 200 metre spaced aircore boreholes E2-3, E2-4 and E2-5 returned individual one metre samples of 537, 452, and 1,028 parts per million (“ppm”) copper respectively on line E2.

“These copper results are based upon strict aircore sampling protocol and determined using a Desktop XRF analyser (“pXRF”) in a field facility.

“For the Phase 1 program to have returned these results supports the prospective nature of the property and the applied target selection. The Pangeni Project benefits significantly from strong technical and local Optionors, Copper Cross Zambia Limited and Pangeni Mineral Resources Limited that have allowed for efficient money-in-the-ground focused deployment of expenditures.”

The Phase 1 aircore program was completed through 67 boreholes totalling 1,891metres of drilling. All the planned Phase 1 targets were tested utilising less metres of drilling than anticipated due to thinner than expected Kalahari cover.

Approximately 82% of the boreholes returned representative samples from bedrock or weathered bedrock with the remainder interpreted to be of sampled basal portions of the Kalahari sequence.

Good success was made in penetrating various hard ferricrete layers in some areas of the Kalahari sequence and a total of 617 samples were analysed by pXRF from the Phase 1 program.

The operation and results from the Phase 1 aircore program have confirmed the applicability of this drilling technique to return representative base of Kalahari, saprolite, and weathered bed rock information within the Pangeni Project.

All the Phase 1 aircore boreholes have been drilled with 200 metre spacing along the exploration lines. To date, none of the sample results disclosed have been verified by assay and/or other analytical or testing procedures by an accredited laboratory.