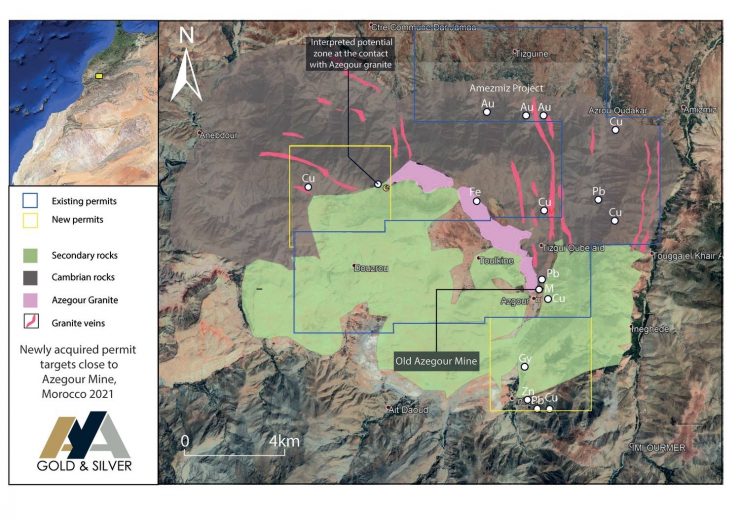 Aya Gold & Silver Inc. (TSX: AYA) (“Aya” or the “Corporation”) is pleased to announce that it has been granted seven new exploration permits by Morocco’s Ministry of Energy, Mines and Environment, increasing its total land position by 40% within its Zgounder Regional and Azegour area properties. The additions form part of Aya’s strategy to consolidate its land position within the highly prospective Anti-Atlas region in the Kingdom of Morocco.

“We are excited to be adding these seven new permits, which materially increase our land holdings adjacent to existing mapped development projects and strengthen our mining commitment in Morocco. These acquisitions enable us to leverage our existing regional knowledge and infrastructure to identify potential geological showings that can ultimately be drilled up to grow our resource base and enhance shareholder value for all stakeholders. Exploration on the permits is scheduled to begin in the coming months,” said Benoit La Salle, President & CEO.

The two newly granted permits increase Aya’s exploration land coverage by 29 km2 in the vicinity of its Azegour property, located about 80 kilometers south-southwest of Marrakech. Both permits lie directly adjacent to the Azegour granite intrusion, whose metamorphic rocks have created numerous gold, molybdenum, tungsten, and copper mineral deposits of interest within its contact aureole, more specifically in its calcareous layers. To date, the most interesting deposits have been discovered in the central and western layers. The old Azegour Mine, which is believed be a typical copper-molybdenum skarn deposit, was developed in the central layer at the most southern location (see Figure 2).