The Biden administration’s openness to US offshore wind investment 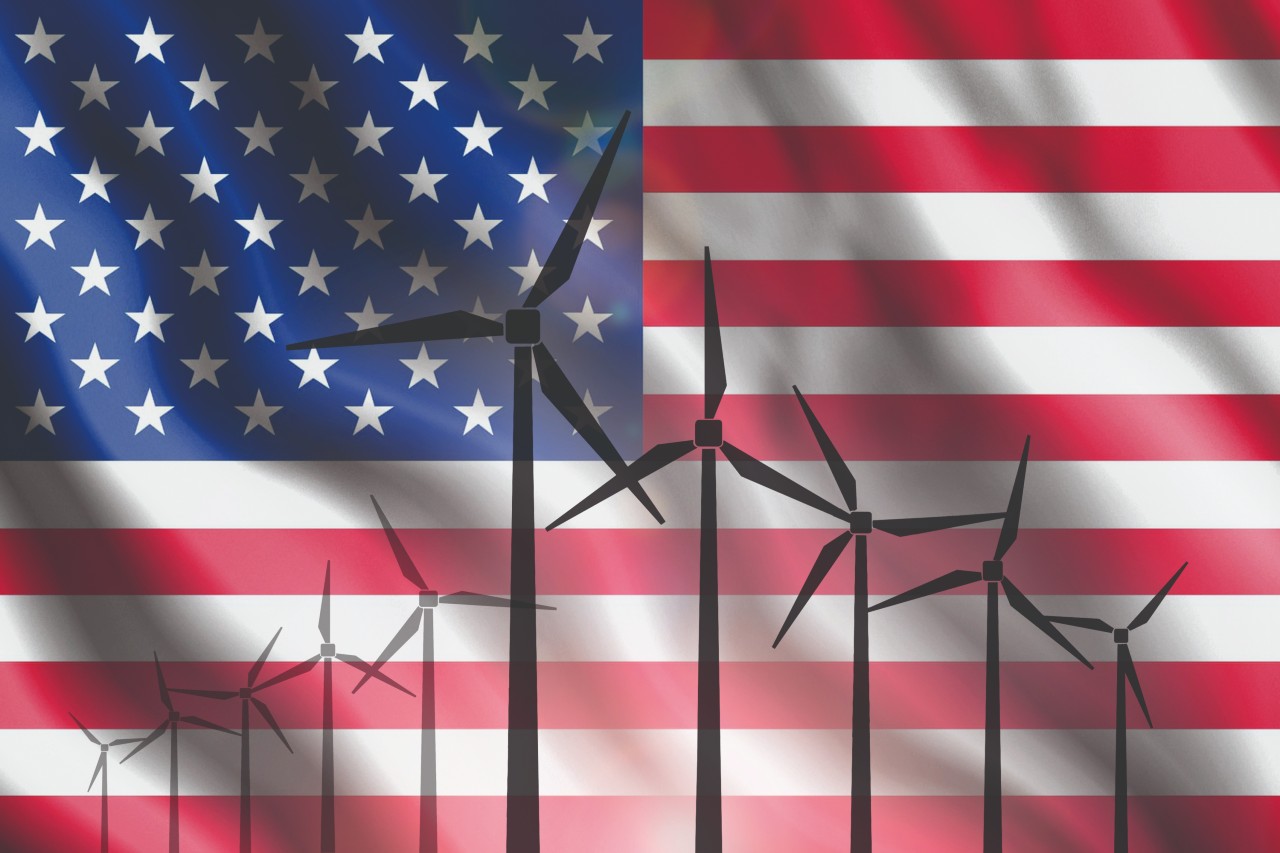 President Biden’s administration has promised to push wind power hard in the coming years.(Photo by Pilotsevas/Shutterstock)

Following huge leaps forward in wind energy production in Europe and China, the US is now primed to follow in their footsteps as its government announces an ambitious set of targets for US offshore wind investment. Abi Millar speaks to Heather Zichal, CEO of the American Clean Power Association, and Professor Barbara Kates-Garnick of Tufts University about what the Biden administration needs to do to get there.

During President Trump’s term in the White House, the US wind sector endured a bumpy ride. Although development continued apace, building on the momentum generated by the Obama administration, the president himself was notoriously hostile towards wind power. Few can forget his claims about wind turbines – that “the noise causes cancer”, that they generate more emissions than gas, or that they “kill all the birds”.

The sector, then, saw an upturn in its fates when President Joe Biden announced an ambitious set of renewables goals. One of Biden’s first moves as president was to rejoin the Paris Agreement, effectively ending an era of climate change denialism. He went on to lay out a clean energy plan that would usher in millions of new jobs, as well as greening the electric grid and mopping up pollution from fossil fuels.

Then, on 29 March, the administration announced a plan to boost the use of offshore wind along the eastern coast. The plan sets a target of 30GW of offshore wind by 2030, which would power up to ten million homes for a year, and avoid 78 million tons of CO2 emissions. It would also create tens of thousands of jobs and trigger more than $12bn a year in capital US offshore wind investment.

“As an industry, we couldn’t be more excited about President Biden’s announcements,” says Heather Zichal, CEO of the American Clean Power Association (ACP). “I would say with the announcements, the impending decision on the first commercial scale project, increasingly ambitious state goals and significant investments from states and the industry itself, we’re finally at a point where the offshore wind industry is ready to take off into scale in the US.”

As Zichal sees it, the benefits are extraordinary. Infrastructure investment could rise from $1.3bn today to $57bn by 2030, according to a American Wind Energy Association report in 2020, generating $25bn in annual economic output. Offshore wind activities could support around 80,000 jobs a year from 2025–35, with around 74 different types of jobs required.

“You’re looking not only at jobs that can easily migrate from the oil and gas industry to offshore wind, but also the construction industry, the transportation and port industries, turbine manufacturing and the supply chain,” says Zichal.

Perhaps because of the clear economic drivers, support for wind has always been bipartisan. Whatever Trump’s views on the matter, the majority of Republicans are in favour of expanding wind power.

“A recent Pew Research poll found strong support for more wind development, including from 69% of conservative Republicans and 93% from liberal Democrats,” says Zichal. “It just makes common sense, whether you’re looking at the tax equity piece or the tax benefits component, or the lease sales that are going to farmers in red and blue states.”

The question, then, is why it has taken so long for offshore wind to reach this point. According to the US Department of Energy, there is more than 2,000GW of wind power blowing off US coastlines. As the industry reaches maturity in Europe and Asia, it may seem surprising that this power remains unharnessed.

To date, the country has just two offshore wind farms up and running – the tiny Block Island Wind in Rhode Island, and the even tinier Coastal Virginia Offshore Wind project. Other proposals have encountered resistance, most notably the Cape Wind project off Cape Cod, which was canned after the two utilities involved cancelled their power purchase agreements. Wealthy residents had also complained about the likely view from their properties.

In the US offshore wind investment is rising

There have been regulatory challenges too – not least the fact that any offshore wind project in federal waters must be permitted by both the state and federal governments. Zichal herself, who has a background in policy, has been working personally to advance offshore wind since 2002. While she has seen previous administrations work hard to move the industry forward, permitting and regulatory certainty have been difficult to achieve.

“At the federal level, the agency that has the authority to lease federal waters didn’t even have that authority until 2005,” she says. “And they weren’t able to set up a regulatory system until 2009. These delays in the permitting process have played a role in the US falling behind global competitors in harnessing the winds off the coast to power communities.”

The past few years, however, have seen a change in attitude, with states up and down the Atlantic setting their own ambitious sustainability goals.

“When you roll up all of the commitments to date, we’re looking at about 32GW,” says Zichal. “And you see governors and members of Congress also taking steps to create a favourable policy environment that will open up the states to draw businesses in.”

Professor Barbara Kates-Garnick, professor of practice at The Fletcher School at Tufts University and former undersecretary of energy for Massachusetts, agrees that this is an interesting inflection point for offshore wind. Compared with his predecessor, Biden brings a clear commitment to climate science, as well as a good set of appointees in favour of renewable resources – therefore, an increase in US offshore wind investment.

“He’s ensured that you’re not going to be able to look at anything without having a climate and energy lens, whether you’re talking transportation, technology, innovation, jobs or housing,” says Kates-Garnick. “His climate proposals are very supportive when it comes to wind – he recognises that energy is local, and that he needs to work with the state on transmission and infrastructure. It’s really important we upgrade the grid to be able to incorporate renewables coming in.”

That said, she feels we will need a clear eye for the challenges ahead. Firstly, there are questions around how offshore wind will be integrated into the marketplace. On the whole, the states in the northeast have a deregulated energy market, meaning generation is competitive and separated out. It isn’t necessarily clear what the grid will look like or how it will handle the inherent volatility of wind.

There are equity issues at stake too, both in terms of who gets the jobs, and in how the infrastructure costs are calibrated. Right now, the developers are often European companies. It will be important to work out how US companies can partner with them and reap the benefits.

“What are their hiring practices and how are they accounting for diversity and inclusion?” asks Kates-Garnick. “How are they supporting the local communities where they’re developing their projects? Often in the US, undesirable projects have been located in areas that are underserved. We need to make sure that positive, non-polluting infrastructure is located in those areas, and that there’s the jobs, training and opportunities to go with it.”

While remarking that “everything to do with energy and infrastructure is challenging”, she feels there are, nonetheless, some big opportunities in store for developers that get it right.

“You need to understand the regulatory milieu, understand the socio-economic milieu and understand the links between clean energy and climate,” she says. “The developers have to engage in these conversations at multiple levels across multiple processes. That’s particularly important at this stage because it’s a whole new industry that’s coming to the East Coast of the US.”

Zichal agrees that, even with European expertise and lessons learned, putting a large infrastructure project in US waters remains an unknown quantity for the moment.

“It obviously requires careful review and the engagement of multiple ocean users,” she says. “And while the existing lease sales and projects that are on the books today hold tremendous opportunity, we also need to look at the additional areas in our nation’s waters where we can focus on lease auctions, starting with the New York Bight [a seabed indentation off the coast of Long Island] in late 2021.”

She thinks that, while Biden’s offshore wind goals are ambitious, they will be achievable through taking a whole-of-government approach, with multiple agencies involved in coordinating projects.

“The president has made it very clear that he expects all of the agencies to work aggressively to throw everything we can at the climate crisis,” she says. “I am pretty optimistic that given the support up and down the coasts [and] given the support in blue and red states, that Biden will be a huge success when it comes to significantly increasing the deployment of clean power. And, certainly, our member companies stand ready to work hand in hand with the administration to do so.”

Enel to invest €170bn to expedite electrification and decarbonisation goals