A number of recent wildfires have been attributable to poor vegetation management along power line routes. Smart monitoring using high resolution satellite images, based on a combination of aerospace engineering, computer science and remote sensing looks like a promising way of addressing the problem, writes Clara Hübinger from Spacept 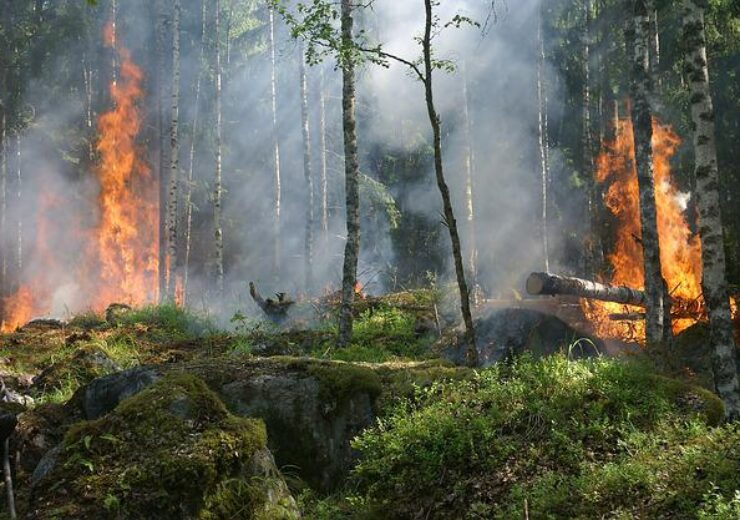 A wildfire. (Credit: Ylvers from Pixabay)

The year 2021 marked one of the worst fire seasons in Europe to date. With around 0.5 million hectares lost to the flames many regions suffered detrimental losses to biodiversity and wildlife. In addition to the destruction of natural habitats, wildfires lead to billions of euros in property and utility damage yearly.

A report from the European Environmental Agency shows that climate change-driven natural events incurred a total economic loss of 487 billion euro across the EU member states between the years 1980-2017. Though wildfires have historically been a common phenomenon in southern Europe, the increased incidence of extreme heat and drought in recent years has given rise to more frequent wildfire events in central and northern Europe. The causes of these fires are manifold and range from lightning strikes to human error.

The 2020 Dixie fire in California and the large-scale investigation of its causes has turned the spotlight on power lines and other infrastructure in forests and the increased risk of electrically generated sparks coming into contact with the surrounding vegetation.

The 2017 Pedrógão fire in Portugal may have been caused by such an electrical spark. Following a period of droughts and heat waves during the early summer months of 2017 a number of fires erupted during the night of 17/18 June in the Pedrógão region in central Portugal. Strong winds and dry vegetation acting as fuel contributed to rapid spread of the fires throughout the region. With 66 lives lost to the flames, more than 45 000 ha of land affected and damage amounting to more than €500 million, the Pedrógão fire remains one of the most devastating wildfires in the history of Portugal.

Initial investigations into the origin of the fire suggested a lightning strike during a dry thunderstorm as the cause. An in-depth examination, however, suggested that electrically generated sparks from a medium voltage power line may have ignited vegetation and acted as the initial source.

These claims have been denied by EDP Distribuição, the company in charge of the power line in question, citing regular monitoring of the vegetation and a visual inspection of the area just two months before the fire.

Devastating fires such as that in the Pedrógão region remain isolated cases in Europe, even as wildfires are increasing in terms of frequency and intensity across the continent. In the United States, though, and in particular in the state of California, they have become a relatively frequent occurrence during the fire season. The 2020 Dixie fire affected some 389 837 hectares of land and resulted in the death of one firefighter. It remains the largest single wildfire in the history of California and incurred damage amounting to at least $1.15 billion.

The cause of the fire was traced to a tree falling onto a power line owned by PG&E (Pacific Gas and Electric Company). PG&E had previously been involved in lawsuits relating to wildfires in 2015, 2017 and 2016, allegedly caused by infrastructure operated by the company. In order to avoid bankruptcy, the company has pledged the payment of $25.5 billion in settlements to victims of the wildfires.

While the Dixie fire remains one of the most prominent examples of fires caused by electrical sparks, power lines are not the only form of infrastructure posing a potential threat of wildfires. With several reports of fires being caused by overheated train tracks in both Sweden and Canada, the Canadian transportation authority, for example, ordered several measures to reduce the risk of wildfires along train tracks during the summer months of 2021. Among those measures were reduced train speeds along certain parts of the track as well as more frequent monitoring of the vegetation and removal of possible sources of fire.

Cases like the Pedrógão and Dixie fires have made it evident that traditional forms of vegetation monitoring may not be sufficient to prevent such disasters. To mitigate dangers, utility companies will need to adapt to changing climate, with hotter and drier summers, and invest in effective forecasting and fire prevention techniques. As wildfires are on the rise worldwide, improved vegetation monitoring techniques will be the key to climate resilient infrastructure management.

Traditionally, vegetation monitoring is performed by carrying out on-site measurements or aerial inspections using helicopters or – in recent years – drones. While these monitoring techniques can provide thorough and reliable results, they are both costly and time-consuming. As a result, many utility companies perform in-depth monitoring across the entire infrastructure infrequently. Even if more frequent spot checks are performed periodically, areas posing a potential threat may be missed during these inspections. The manual processing of trees posing a potential risk additionally prolongs processing times. In some cases, it may take up to six weeks for trees within infrastructure corridors to be removed.

The vegetation monitoring systems developed by the Swedish-American company Spacept leverage the benefits of very high-resolution satellite imagery in combination with machine learning techniques to detect objects as small as individual trees. Unlike traditional monitoring systems, object identification is not performed manually. It instead happens automatically utilising AI-powered algorithms. Specifically designed for the detection of vegetation encroachment and the identification of areas of high risk, Spacept’s models can analyse hundreds of kilometres of powerline within seconds. By switching from an aerial helicopter or drone imagery to satellite data, users can save time and cut back on cost as well as CO2 emissions. Satellite-based inspection along a 10 000 km long power line saves 97 tonnes of CO2 and €102 000 compared to traditional helicopter based surveying. As such, Spacept enables companies to cut back on their carbon footprint and aid in the implementation of sustainable vegetation management practices.

Founded in 2019 with the mission to reduce wildfires worldwide, Spacept has received recognition from industry and academia alike for its novel approach. Spacept’s team combines experience in aerospace engineering, computer science and remote sensing. And for its work within sustainability, the company has been selected as part of Google’s Sustainable Development Goals Accelerator programme. Building on its experience in infrastructure monitoring, Spacept has expanded its catalogue of monitoring offerings from vegetation management to oil leak identification, railway inspection and even faulty street light detection.

With a growing incidence of devastating fire seasons in the United States and Europe, swift action is required from companies and decision-makers alike to prevent events such as the Dixie fire in the future. Smart monitoring solutions based on satellite and AI-based technologies will be increasingly needed to supplement traditional practices.