A full-scale mock-up of the U-Battery small modular high temperature reactor was recently inaugurated at Whetstone in the UK, reports James Varley 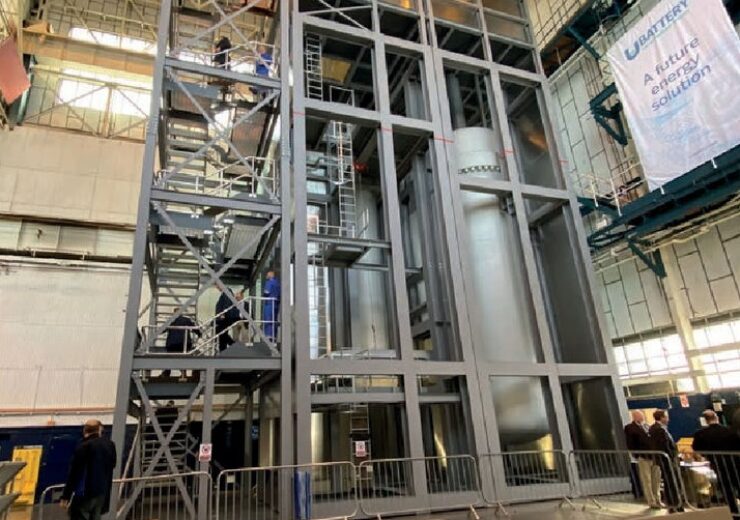 It’s not very often that nuclear power plant designers get to see, touch and walk round a full-scale model of their vision, but this is what is now available to the Urenco-led U-Battery microreactor project in the UK.

The recently completed full-size mock-up of the U-Battery – a high temperature helium cooled reactor – is located in the high bay of Cavendish Nuclear’s Whetstone works in Leicestershire, UK. This is a site that has played an important role in the UK’s nuclear industry over many decades and where English Electric’s reactor engineering division was started in the 1950s. The high bay includes a crane that take a load of 50 t up to about 18 m, which proved invaluable for the U-Battery mock-up installation (as well as a 29 m deep pit that was used in the past to assemble and test AGR refuelling machinery).

The full-scale model at Whetstone consists of the main vessels of the 10 MWt/4 MWe U-Battery, the reactor pressure vessel and the intermediate gas/gas heat exchanger vessel, as well as the all-important cross vessel duct that connects them.

The mock-up project was implemented in around 18 months from initial idea to completion, by U-Battery and Cavendish Nuclear, as supported by the Hyde Group and supply chain organisations. It results from an award made by the UK government’s Department for Business, Energy and Industrial Strategy (BEIS), under its Advanced Manufacturing and Materials (AMM) programme.

Speaking at an inauguration event in September at Whetstone, Steve Threlfall, general manager of U-Battery, noted that the U-Battery/Cavendish Nuclear team had successfully overcome “a number of challenges to bring this unique fabrication to life”, not least those arising from working during a pandemic.

“By building a full-scale model people get a real sense of what an AMR [advanced modular reactor] looks like as well as how it can be built”, he said. “It also enabled us to determine the requirements for the concept design and justify the nuclear power plant’s operational safety case. This is why the mock-up is essential to the delivery of what will be our first power plant.

“Our aim is to take advantage of the economies of scale used in advanced manufacturing and modularisation settings and production line assembly techniques to produce this new generation of AMR technology…We are now working to form new partnerships to support the next phase of U-Battery’s design and development.”

James Ewence, new build & advanced nuclear technologies business director, Cavendish Nuclear (a wholly-owned subsidiary of Babcock International Group), said that working on this phase of U-Battery development had allowed “our team…to demonstrate the wealth of their experience gained from supporting the UK Advanced Gas Reactor fleet, in combination with up to date modularisation techniques, which have more recently been used in decommissioning projects.”

The mock-up provides a vivid demonstration of this modularisation, with the U-Battery designed to consist of factory manufactured, pre-tested, road transportable modules that can be installed simply with minimal site assembly work.

Another striking feature of the U-Battery illustrated by the mock-up is the innovative design of the cross vessel duct, which is in the form of a U-tube, similar to an umbrella handle, rather than the straight pipe normally found in small modular high temperature reactor designs. The cross vessel duct is a co-axial contraflow pipe that connects the reactor pressure vessel module with the intermediate heat exchanger module, transferring hot helium from the reactor to the heat exchanger and returning cooled helium to the reactor. Onerous operating conditions, including the high temperatures, mean that the duct needs to be replaceable, perhaps at the mid-life of the U-Battery plant.

“The U-shaped duct, although simplistic and unconventional at first glance, actually yields significant advantages over more conventional straight designs”, notes Tom Arnold, technical lead for Cavendish Nuclear’s delivery of the U-Battery AMM project. “The main benefit of this profile is that it can be installed from a single side, without needing to move the two vessels or their supporting modules, thus simplifying and enabling a modular installation approach. Other benefits include the fact that thermal expansion and the resulting stresses will be in a single orientation and separation forces between the vessels under thermal or seismic loading will be reduced significantly compared to the more traditional straight pipe connection.”

In addition to the Advanced Manufacturing and Materials programme, U-Battery is participating in Phase 2 of the UK government’s Advanced Modular Reactor competition. In July 2020, it was one of three vendors to progress from Phase 1 to Phase 2 of the competition (the others being Tokamak Energy (compact fusion employing spherical tokamak with high-temperature-superconductor magnets) and Westinghouse (450 MWe lead cooled fast reactor) and was awarded £10 million of funding to initiate design and development work.

A key future milestone for U-Battery is finalisation of work funded via this AMR competition award, with a target date of the end of June 2022. This will provide U-Battery with a proven conceptual design and means it will be ready to start front-end engineering design. And, in the UK, depending on advice from ONR/EA, the hope is it will be able to enter the Generic Design Assessment process.

With its high output temperature, over 700°C, the U-Battery is potentially a useful source of decarbonised process heat and one important potential market envisaged for the technology by its developers is the decarbonisation of hard-to-abate industries, the “foundation industries”, eg, cement, metal and paper. “We think this is a sweet spot for us”, says Steve Threlfall.

“Sizable prospective markets” have been identified in both the UK, where U-Battery can be used to power heavy industrial sites, and in Canada, where it can be deployed at extractive industries/mining sites and in off-grid remote communities.

The potential applications envisaged in the UK and Canada also exist elsewhere around the world, and other focus areas for U-Battery include Japan, Poland and India, for example.