An eco-system-based approach to river management is needed for the Yangtze river basin, says the WWF 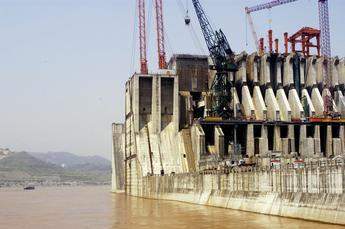 With a length of 6378km, the Yangtze river is the world’s third longest river. Its basin, covering 1.8Mkm2, is home to about one third of the Chinese population – more than 400M people – and finding a balance between economic development and environmental and social needs is an ever-increasing challenge. Dams and thousands of kilometers of dykes have already cut off the river links to lakes, which once formed a complex wetland network fulfilling important natural functions such as spawning and feeding for fish, and intensive land reclamation has created agricultural and urban settlements on former floodplains and lakes. Severe flooding is now an almost annual event with thousands of lives lost and economic losses worth more than US$70B in the last 15 years.

Despite centuries of change, the lakes and floodplains of the Yangtze continue to support a wealth of distinctive natural diversity. The flora and fauna of this area are uniquely adapted to the seasonal changes in the water cycle – fish move freely between them while non-aquatic animals make for higher ground. Yet, changes to these seasonal fluctuations due to dam construction are putting further pressure on ecosystems. A recent report by WWF has identified it as the top global river basin where high value ecosystems are most at risk from current and planned dam construction, with at least 46 dams under construction or planned (including the Three Gorges dam, the world’s largest hydro power plant). The Yangtze also receives 22B tons of industrial effluent and poorly treated sewage water annually, causing major pollution problems.

Such problems are not confined to the Yangtze alone. China’s history has seen an evolving process of harnessing and exploiting its rivers and their waters, mainly through engineering and technical means. Despite positive moves such as drawing together the management of water resources with river basin and provincial management as well as other advances such as the revised Water Law adopted in 2002, China continues to show clear signs of unsustainable use of its water resources and the related ecosystems of its rivers. Devastating floods and mudslides, declining water quality and fish catch, loss of biological diversity, water shortages and falling water tables are but some of the signs that the management systems for water resources, rivers and lakes in China need urgent attention.

‘So much of China’s economy and the biodiversity that it depends on is related to the way water is managed,’ says Claude Martin, Director General of WWF. ‘WWF is advocating a move away from an overemphasis on engineering solutions to water management to a more comprehensive view – one that takes into account land use, the effects of climate change, protected areas, and upstream protection.’

WWF is advocating a natural management solution for the Yangtze, finding a way to work with, rather than against, the river, and has been working at both the policy level and in the field towards restoration of the balance of nature and people in the central Yangtze since the 1980s.

A main component of the solution being put forward by WWF in China is integrated river basin management (IRBM), which aims to promote better management and preservation of water resources, the ecosystem and biodiversity within river basins, while improving the environmental quality and living standard of people. IRBM is rapidly being introduced in many countries as a management framework that can help draw together economic, social and environmental aspirations. In the European Union, for example, IRBM became a legal requirement under the 2000 Water Framework Directive. It is a process of coordinating the management and development of the water, land, biological and related resources within a river basin, so as to maximise the economic and social benefits in an equitable way while at the same time conserving freshwater ecosystems and species.

IRBM is also a participatory mechanism for solving conflicts and allocating water among competing users, while recognising that natural ecosystems are in part the suppliers of natural resources and the fundamental ‘natural infrastructure’ that delivers it to human users. Natural ecosystems are also key providers of a range of ecosystems services (flood mitigation, water quality improvement and fish
productions for example), which were previously overlooked in water resource management.

The key recommendation of the Task Force was that the State Council should adopt an IRBM framework for China and introduce it through a staged process commencing with the Yangtze river basin. Furthermore, it identified the need for programmes aimed at increasing stakeholder awareness and public participation, for economic measures and financial incentives; and for innovative methodologies and technologies. Amongst those, the promotion of retrofitting technology for dams was highlighted.

According to the Task Force, China – which stands at a significant cross-road in it development – now has two options: continue on the same path as today, fuelling economic growth with unsustainable exploitation of the rivers and their associated natural resources, or move to more integrated approaches designed to entrench sustainability as the foundation of future development. Recognising rivers as the lifeline of society, the economy and the environment and adopting an integrated planning and management approach is now under deliberation by China’s State Council.

While the Chinese authorities are deliberating their response to the Task Force report, WWF is working on the ground in the Yangtze basin to promote a more sustainable approach to river management. On Swan Islet in Hubei Province, WWF is working with local authorities to re-establish the natural connections between the wetlands and the Yangtze in order to restore the area’s ‘web of life.’ A way has been devised to re-introduce water and fish fry into the wetland area. The floodgates of a dam, the sole function of which was once to prevent and drain off floods, will now be opened seasonally, taking into account the fish breeding season and allowing fish to flow into the wetlands from the Yangtze. By re-establishing this important connection between the wetlands and the Yangtze, a very important step has been taken towards restoring the area’s natural habitat and the home of the white-flag dolphin and elks.