The Multibrid low-speed technology offered by Finnish wind turbine developer and supplier Winwind has been specifically designed to meet utility grade reliability requirements. Novel features include a single stage gearbox with integrated permanent-magnet synchronous generator, enabling multi-megawatt units to avoid becoming overweight. A frequency converter ensures that stable power is supplied to the grid, and allows reactive power to be provided when required. 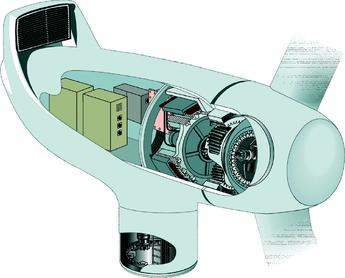 In recent years traditional power companies have become increasingly active as investors in wind power projects, and the unit size of the turbines has grown markedly.

Before investing in wind, such power companies are particularly keen to secure the operational reliability of the plant. Thus availability and maintenance issues have risen up the wind technology agenda in recent times. On the other hand, the increase in unit sizes has resulted in bigger masses and higher mechanical stresses on the key components of wind turbines.

The best locations for wind parks are already occupied in many countries. Therefore, machines with better energy yield in lower wind speeds are becoming more sought after. This favours variable speed turbines because they can provide stable power output and compensation for wind speed fluctuations. In some applications it is also important that reactive power can be controlled.

All these changes tend to place more stringent requirements on wind turbine materials and on the durability of each of the components. However, bigger units cannot be allowed to get too heavy because this would undermine the economics and cause difficulties in construction and installation. Much turbine development in recent times has therefore been directed to striking the right balance between component cost, total turbine weight, and guaranteed reliability.

When Winwind Oy was born, in the late 1990s, its original owner, PVO, had a vision that to succeed in the longer run wind power technology should reach levels of reliability and maintainability at least as good as those typical of conventional power stations.

Winwind Oy is now owned by PVO together with venture capitalist Proventia. As the second biggest power producer in Finland, PVO’s expertise in O&M has been a key ingredient in Winwind’s development activities.

The company started with “no baggage”, in terms of choice of technology, and an open mind, but at the same time the target was to build on the best of what already was available in the wind turbine arena.

We therefore acquired the rights to the Multibrid concept, which we considered one of most promising technologies in the business.

The concept originates from the German company Aerodyn, and it is based on the following features:

• Direct drives are reliable but will be too heavy and thus too expensive in the multi-megawatt class.

• Gearbox problems still arise in high-speed machines and no clear solution to them has been found. But what we do know is that the high speed stages of the gearbox seem to be the most susceptible.

The Multibrid concept eliminates these vulnerable high-speed sections of the gearbox, and uses only the robust slow speed parts.

This also makes it possible to keep the turbine dimensions and mass reasonable, even at multi-megawatt sizes.

The rated rotor speed is 25 rpm and the rated generator speed 146 rpm.

The generator stator is connected to the frequency converter, which transfers the electricity produced by the generator to the grid.

Since 1999, Winwind has worked with Metso on the development of the gearbox and with ABB on the generator.

In the design of the generator for Winwind turbine, energy efficiency was a key target. Thus the emphasis was on low cogging torque and retention of high efficiency at partial loads. Therefore a permanent magnet pole wheel was chosen. Because the overall reliability was the other main driving force in the development, a preformed coil wheel was selected and the cooling system was dimensioned to achieve a very low winding temperature. No ambient air passes through the generator, minimising risks due to salt, water, erosion etc.

One potential drawback of permanent magnet motors and generators is their higher initial cost, as a result of the high price of the magnets used. However, this higher cost is offset to some extent by the simpler structure of the other parts of the wind turbine set. Also, in the near future, the cost of permanent magnet units is expected to further decrease.

The generator pole wheel is driven from the gearbox sun axle through a slip clutch. This protects the gearbox from any shock loads that might occur due to short circuits. The generator air gap is constantly monitored by the computer control system.

In the Winwind turbine, the permanent magnet pole wheel generates the necessary flux without any winding or excitation system and with minimal losses in the rotor.

As already noted, the generator is connected to the grid by means of a frequency converter. This achieves high overall efficiency, while keeping the mechanical structure as simple as possible. It also contributes to high efficiency over the whole operating range, resulting in small power fluctuations and low rotor noise during partial load operation. In addition the system lends itself to producing reactive power when needed, for example during short interruptions. This ability to adapt to reactive power needs, and regulate that component according to demand, is of course much appreciated by grids feeding big rotating machines.

Choice of a pitch controlled variable speed wind turbine produces several advantages. For example power output is smoother, compensation for wind speed fluctuations is easier, reactive power can be controlled, and power production and energy yield can be better optimised.

The Winwind wind turbine is monitored by a central control system, which analyses and controls the electricity production according to the data provided by sensors.

The IGBT inverter connects to the grid via a transformer. The voltage level of electricity fed to the grid can be 10 kV, 20 kV or 30 kV and the frequency either 50 Hz or 60Hz depending on the grid.

No separate excitation system is used. The permanent magnets are incorporated directly in the rotor, while some of the magnetisation is done by the frequency converter.

No significant starting current is needed when the generator is used with a converter.

There is a grid side filter to reduce the harmonic content introduced by the frequency converter, significantly improving power quality.

Winwind’s first 1 MW machine (WWD1), pictured above, was erected and commissioned in the summer of 2001, in Oulu, on the Finnish west coast. There are now nine WWD1 machines operating at four locations in Finland:

In all these cases reliability targets have been met. The few outages that have occurred have been a result of quality problems in the “conventional” parts of the machines.

The operational results have been good right from the very beginning. The availability of all units has been much higher than guaranteed and all mechanical components are behaving as predicted. Also, grid interference is in conformance with that guaranteed by the inverter manufacturer.

Two further 1 MW units are being supplied to France (Valhuon) and two more to Portugal (Mafra), while a tenth Finnish unit is to be delivered to TVO for Olkliluoto, where two boiling water reactors are in operation and a 1500 MW pressurised water reactor is under construction.

This autumn will see a major scaling up of the technology when Winwind is due to install its first 3 MW unit (WWD3). This, like the first 1 MW unit, is to be built at Oulu, and the customer is PVO Innopower Oy, renewables arm of PVO. It will be Finland’s largest wind turbine, and one of the few 3 MW machines currently operating around the world – representing a major milestone for Winwind and the Multibrid concept.