Larger, more efficient and more powerful wind turbines have led to a vast increase in the size of components. This in turn makes transportation increasingly difficult. Mark Brierley asks Poul Martin Wael of Siemens Wind Power EMEA how transport technology has had to innovate to keep pace with size demands. 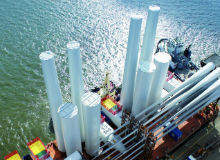 When commercial wind turbine production began in the early 1980s, the average power output for turbines was around the 50kW mark, with blade lengths of several metres.

Improvements in composites technologies and manufacturing processes have gradually allowed for longer turbine blades, while maintaining crucial strength and stiffness.

This meant that by the early 1990s, turbines were averaging up to 300kW capacities, and by the turn of the millennium this had increased to more than 1MW on average. Today, onshore wind turbines can be found with power ratings in excess of 8MW and blade lengths of 90m, with offshore turbines not far behind. Siemens now produces the SWT-6.0 offshore turbine with 75m blades and 6MW of power production capability, causing an unenviable challenge for those tasked with transporting components from the factory to the farm.

Mark Brierley: What are the logistical challenges of transporting ever-larger wind turbine components around the globe, particularly large single components, such as the new 75m rotor blade?

Poul Martin Wael: Obviously, we have the most logistical challenges from an onshore perspective: components are simply becoming too large to transport via the roads. The 75m blade developed for the offshore market has probably reached the limits of what we can transport on roads. It becomes really challenging to navigate bends and turns in the road.

Tower diameters are likely to increase, depending on different monopiles and soil conditions, and we have already reached the limits of what we can get in terms of permits for transporting with the current diameters. We can transport the nacelles in different parts; however, some of these will still be too large to transport via roads.

Every time we develop something new, it requires new developments in the transport industry, as we have done before with the B52 blades and before that. Transport vehicles, cranes, vessels and so forth all need to be developed. However, we always cope and are able to develop the necessary transports.

With particular reference to port logistics, how are these increasing sizes and the growth of the wind market impacting on Siemens’ port operations? Are you finding capacity stretched as orders for turbines rise, and are existing port facilities capable of handling the larger components?

As mentioned earlier, transportation equipment must be progressively developed to handle these larger components, as has been done in the past. With the new 6MW machine, the number of cranes available that could lift the components is limited. There are existing vehicles but not as many as have been able to deal with smaller blades and towers.

The same can be said for vessels. There is a limit on the number of vessels that can carry the 6MW turbine. These larger vessels have larger keels and will therefore require more water underneath them, thus ports must be deep enough to contain them. This is often a contradiction, as offshore wind power plants are generally built in shallow waters where possible. Ports have always presented a bottleneck in the history of offshore wind so Siemens Wind Power has always tried to develop close relations with port authorities, as seen in Esbjerg, Denmark, or Mostyn in the UK.

"Today, onshore wind turbines can be found with power ratings in excess of 8MW and blade lengths of 90m, with offshore turbines not far behind."

There are still a number of other viable port locations. However, we expect demand to increase in the near future. We have a number of strategic ports around Europe that will help logistics with the incoming boom in offshore projects around Europe. The whole concept of our new 6MW machine is to reduce the amount of work done at ports, moving it to factories instead. It is a simpler design that reduces the complexities of construction at the quayside. Less work on the ports reduces costs.

What investments in transport technology is Siemens making in order to cope with these increases in size and volume?

In 2010, Siemens became equity partner in offshore wind park installation specialist A2SEA. Moreover, Siemens is investing in new lifting equipment for the new B75 blades of the 6MW.

Are inadequate port facilities a barrier to entry into any markets around the world?

Port facilities have not proven yet to be a ‘show-stopper’ for us but definitely there have been [barriers]. This is because of the mismatch between the necessary deep waters of the ports compared with the desirable shallow waters of project sites. There is also a challenge with ports in that they are often situated in areas close to cities with a lot of traffic in the water. Cruise ships and ferries will often take priority in the ports and slow down projects, which has an impact on installation costs.

How does Siemens work with port authorities to ensure the company’s needs are met?

Existing ports are closely analysed by us continuously to assess their feasibility and monitor their developments. It is also important to keep close relations with port authorities. Two years ago, we undertook a Europe-wide census of all the existing ports available, just to map them all out and be sure we had ports available so we knew what options were available to us when bidding. We also experience proactive action from port authorities visiting and presenting their ports and providing updates and requesting advice on how to accommodate the wind industry.

How important is the planning phase in overcoming any logistical hurdles before transportation begins?

Everything needs to be anticipated and therefore planned for. Almost every step we take requires permits, especially in regard to transport. There is a two-year planning period for us in terms of preparing the port, cranes, installation vessels and road transport. It is a very complex puzzle involving storage of equipment synchronised with transportation and permits.

As the wind repowering market grows in Europe, what extra dimension of challenges do the removal of old infrastructure and its replacement pose from a logistics standpoint?

As yet there have been no removals of our offshore structures.